“What is it to cease breathing, but to free the breath from its restless tides, that it may rise and expand and seek God unencumbered?” Says the Lebanese Poet Khalil Gibran. 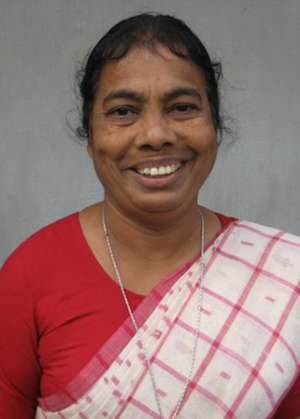 When I received the call yesterday morning on Oct. 28 from Sister Philo Kottoor, the Provincial of Patna, my senses could not believe what my ears heard. Sister Sujata Maliakal was visiting home in Kerala and we knew it. Times at home are most relaxing and rejuvenating for all of us. So it may have been for Sujata. She also had another purpose of being home because her sister-in-law Susan had suffered an injury and Sujata felt that she could do her mite to help her brother and the little ones at home. It was while giving her little help in the morning of Oct. 28 that she fainted, never to wake up. Her tired heart had given up.

Is it really true? I keep asking myself. Sujata lying still in front of us is proof. I know it. But that harsh reality is yet to sink in for every one of us present here. Sister Sujata Maliakal has bid her earthly farewell to all of us – her beloved family members, her dear and loving sisters at Sisters of Charity of Nazareth Congregation and we all are in great shock and grief which cannot be explained in human terms.

Sister Sujata Maliakal SCN was born on Oct. 15, 1951, as the eldest daughter to her parents late K.M. Mathew and Late Aleykutty Joseph at Kattapana, Iddukki Dt. and Diocese, Kerala. She was christened Mary Mathew by her parents.

Mary Mathew entered the Congregation of the Sisters of Charity of Nazareth Mokama, Bihar as a Candidate in the year 1972 and made the First Vows as Sister Sujata SCN on Sept. 27, 1975, and the Perpetual Vows on Dec. 02, 1980.

Sister Sujata has ministered as a gifted teacher, able administrator, efficient School Principal, Secretary to the Provincial, and also as a dietician in various SCN missions in India and Nepal. In her last assignment as assistant director of EPDO, (Eastern Province Development Office) Sister Sujata was entrusted with the responsibility of communicating with the benefactors. In Sujata’s own words, her time with the children at Dharuhera, Haryana was one of her best ministry moments. She loved being with them, caring for them, and empowering them! She was in touch with some of them till the end.

Sujata may well be described in two simple words – unassuming and quiet. In her own quiet demeanor, she found joy in doing small things for others. Those of us who have lived with her have been beneficiaries of her delicate darning and sewing with her fingers. Not the one to use a sewing machine, she enjoyed using her hands to mend clothes.

The family was very dear to her. Though we are not part of your biological family, we know you all – Rev. Sister Deepti RNDM, Rev. Sister Smita, Provincial of Religious of Assumption, Mr. Jose Mathew, Mrs. Saly Kurian, and Mrs. JecilyTomy. Being the firstborn, Sujata assumed the role of being the leader of the crew of the six of you. We know your sorrow is as deep as ours. Your eldest sister is no more and we offer you our condolences and pray that God of consolation heals all of us from this grief.

In the Gospel of St. John 11: 25- 26 we hear Jesus saying, “I am the resurrection and the life. Those who believe in me will live even though they die and all those who live and believe in me will never die. Do you believe this?”

And in one of the quotes it is said, “How can the dead be truly dead when they still live in the souls and hearts of those who are left behind”!

And so live on in us Sujata and continue to inspire us and pray for us as we bid you goodbye.