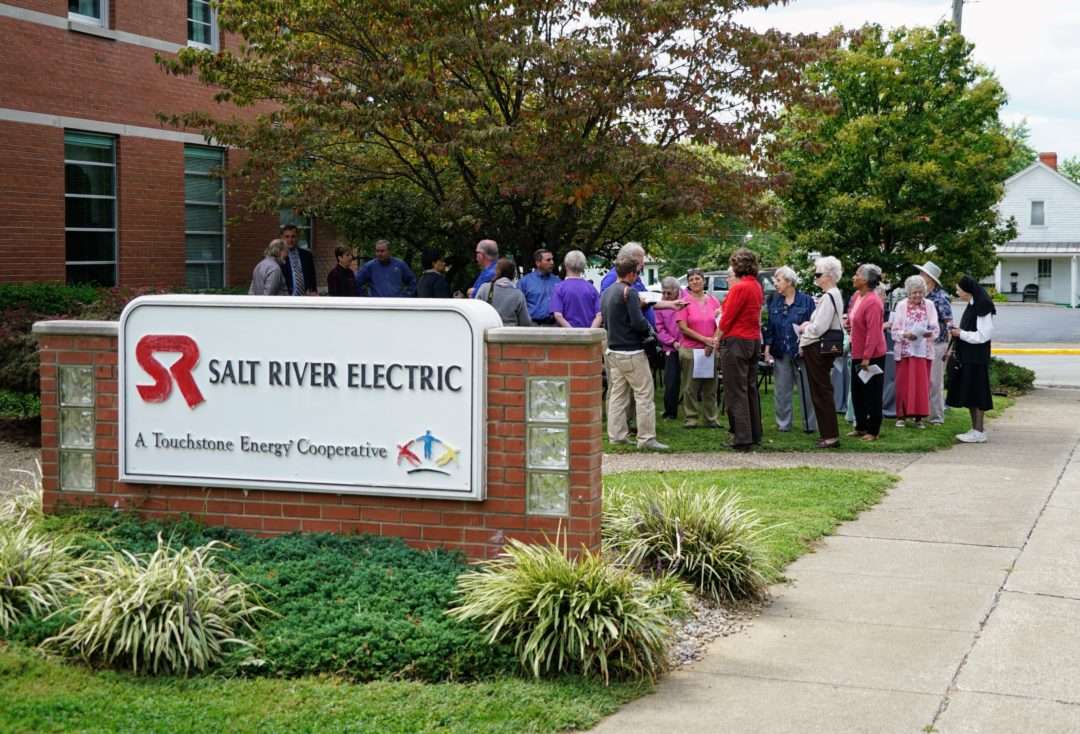 As part of the Season of Creation (September 1-October 4), SCN’s are invited to find a sustainability story in their geographic location and celebrate it. Today, those at Nazareth joined in prayer to celebrate Kentucky’s Touchstone Energy Cooperatives who are building a 60-acre solar farm in Winchester, KY. Members will be able to purchase solar energy for a 25-year license. This commitment to Earth and its future is to be commended as one of the biggest solar installations in Kentucky and as a milestone that cooperatives are leading the way in bringing renewable energy to members and to Kentucky.

You are invited to find a creation project to celebrate and adapt the following prayer.

From The Kentucky Standard

The sun shines bright on their old Kentucky home, where the Sisters of Charity of Nazareth have installed solar panels to light and heat their buildings.

They’re also committing to renewable energy in a bigger way by backing a solar farm in Clark County that could provide electricity for thousands of Kentuckians.

Thursday afternoon, the sisters joined representatives of Salt River Electric on the lawn of its Bardstown offices for a prayer service to celebrate the initiative by East Kentucky Power Cooperative and its 16 member co-ops to construct some 32,300 photovoltaic solar panels on a 60-acre site west of Winchester. The panels are to be leased by customers, who get credit for the energy produced.

Tim Sharp, president and chief executive officer of Salt River, welcomed the sisters and said the co-op’s relationship with them goes back to the 1930s.

“The sisters have always been involved in the environment and in wanting to better our world, and we appreciate that,” he said, assuring them that their commitment is one that shared by the customer-owned company.

Sister Mary Assumpta quoted Pope Francis that Sister Earth “cries out to us because of the harm we have inflicted on her by our irresponsible use and abuse of the goods with which God has endowed her.”

Sister Susan Gatz, president of SCN, said the gathering was a recognition of “our place” on Earth and a reflection on “how we live as one species in our planet’s ecosystem.”

Sister Rosemarie Kirwan read from the “Tao of Liberation” about being not on the earth but of it.

In between readings, the sisters sang verses from “The Beauty of Nature” and the refrain of St. Francis of Assisi’s “Canticle of the Sun.”

“We really believe that part of our mission is to care for the earth,” not only here at home but as part of Sisters of Charity’s international community, Gatz said afterward.

It is a commitment that is rooted in Scripture and the teaching and example of Jesus, Sister Joetta Venneman added.

Carolyn Cromer, director of SCN’s Office of Ecological Sustainability, said the community will buy some of the farm’s solar panels but is still trying to “discern” how many.

Cromer said that SCN’s international executive committee recently approved a “bold goal” to become greenhouse emissions-free in its Western Province (the United States and Belize) by 2037 and in its Eastern Province (India, Nepal and Botswana) 10 years later.

That means the sisters would not use any fossil fuels such as oil, coal and natural gas by that time in order to slow the rate of global warming.

“It’s really what we believe everybody should be doing right now,” she said. “It’s not extreme, it’s mainstream. But unfortunately, not enough people are looking at that and asking these questions, so we’re looking to lead that effort.”

Most of the energy produced by EKPC for its member cooperatives is still produced by coal and natural gas, but whas been moving toward providing more electricity through renewable energy including hydroelectric power, biofuels and now solar.

The solar farm will provide 8.5 megawatts of the supplier’s maximum capacity of 3,000 megawatts that can be produced at any given time.

That is only a small amount, Nick Comer, a spokesman for EKPC said, but it is more than symbolic. He said the amount of electricity produced by renewable energy sources including solar will continue to grow.

“A large number of our members — a larger number than in the past — are interested in renewable energy and having that option, so we wanted to provide them a lower cost way to get into that market so that they can participate in renewable energy going forward,” Sharp said.