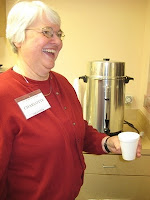 From “News off the Streets”, March 2010 – St. John’s Center
If you are a friend of St. John Center or even know of its existence, the name Charlotte Hazas, SCNA, has to ring a bell. She has done it all here. It started in 1987 when her priest helped her get a job at the Cathedral of the Assumption. Part of those duties had Charlotte coming to the Center as a job counselor.
But she wanted to do more. So she went to Spalding University to get state certified as a drug and alcohol counselor.
Charlotte continued to work her way up. Eventually, she became Assistant Director. “One of the best parts of St. John Center is that we reach people on so many different levels. Some guys come here just to get coffee or a hot shower. Others who are mentally ill look to us as a safe place where they are not preyed upon. Some come for drug or alcohol treatment, others are hoping to be placed in apartments,” said Hazas.
Charlotte has helped men seeking all those needs for nearly two decades. In 2006, she retired. But that didn’t last long. “I knew I wanted to come back. I didn’t feel like myself. This place is a big part of who I am and what I’ve done,” she said.
Charlotte took four months off. A breaking point to let the guys know she was taking on a different role as a volunteer. Actually, she’s a super volunteer. At the coffee station, Charlotte doesn’t just pour and add cream and sugar. She addresses each of the men by name and lets them tell her exactly how much cream or sugar to add. She said, “The guys have limited choices. I want them to have it the way they want it. I really like these guys.”
And it’s clear the men of St. John Center like and respect her too. A constant, “morning Miss Charlotte, it’s great to see you,” rings through the Center when she’s around.
Charlotte spends a great deal of time passing on her knowledge and enthusiasm to others. One morning she was working with a student from Spalding University. She explained why some of the men need these services. A mentally ill man came up to get some coffee. After he left, Charlotte explained his situation and how if he was in close quarters he would become extremely agitated and act out. He feels peaceful here and that’s why he comes back.
Charlotte then pointed out a man in a wheel chair and informed the student that he has to leave Wayside Shelter (an overnight facility only) every morning. His option is to hang out on the streets or come to St. John Center. Her point is quite simple. “Every man has an interesting story and they are fun to be around,” she said. “The best way to understand people is to get to know them. How do you understand homelessness? Well, if you get to know homeless people, you can grasp what it is and how these guys got here. And these guys are thankful we are here to help them. I love it here, the spirit and welcoming atmosphere.”