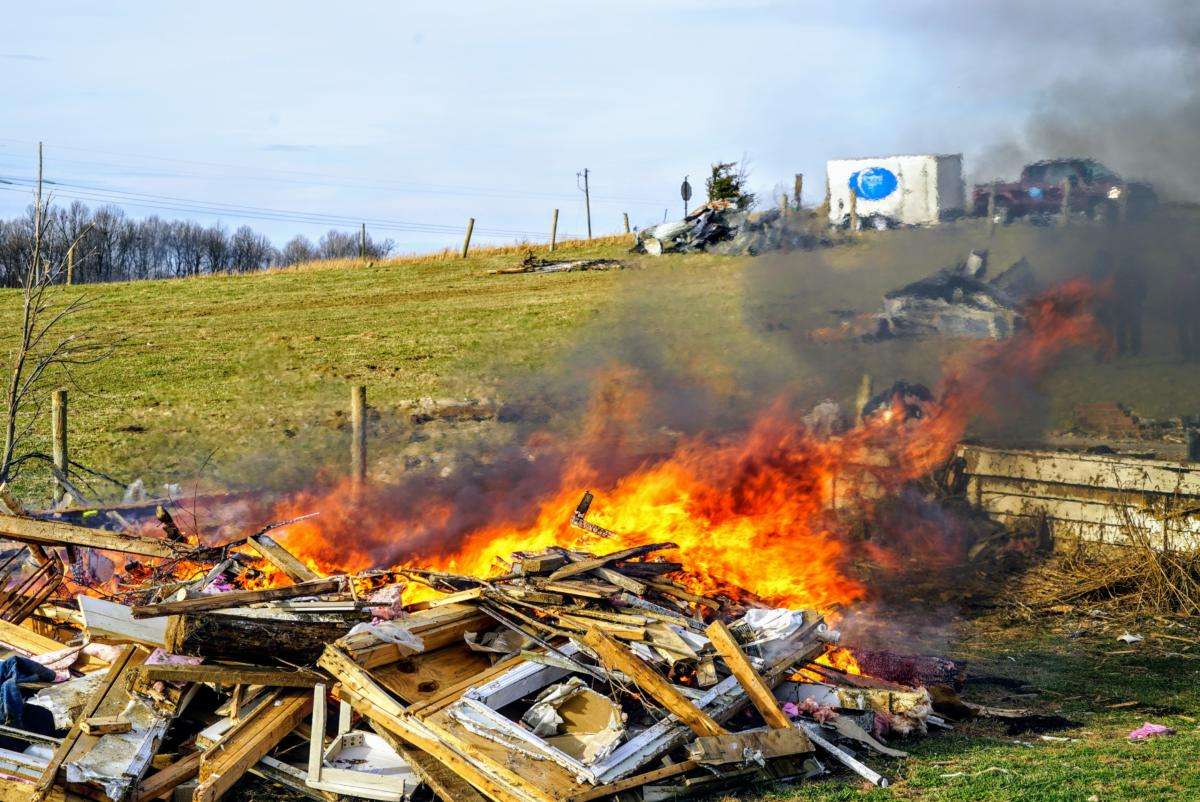 With tornadoes predicted to hit Kentucky and other states this last Friday, Dec. 10, mere weeks before Christmas, the Sisters of Charity of Nazareth took precautions for their safety and prayed for all who might be in the path. As tornadoes began touching down, one traveling as far as 200 miles, police reported widespread destruction with rescues underway.

At the Motherhouse, all were safe, and those Sisters with loved ones in the areas hit hardest placed phone calls. Sister Rita Davis, a native of Bowling Green, was relieved to talk to her brother and nephew. Neighborhoods, not far from them, had been leveled. Sister Luke Boiarski, director of the SCN Disaster Relief team, started getting calls from volunteers willing and ready to respond. 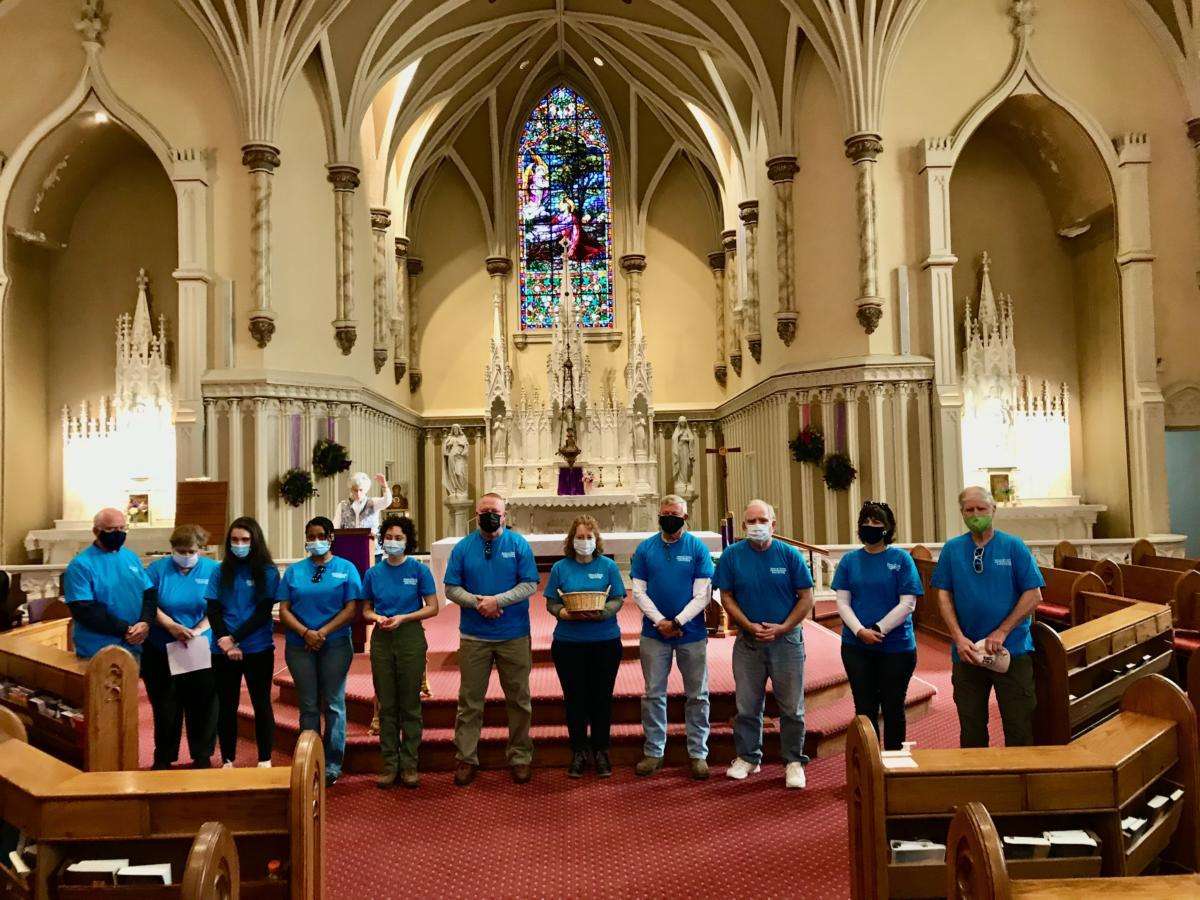 With a formal blessing from the Sisters at St. Vincent Chapel, and under the leadership of Sister Luke, team members immediately began helping to clean up in parts of Kentucky, and offering prayerful support. In large communities, and in small, the destruction the volunteers have witnessed is overwhelming and the need is great.

Throughout the week in press conferences, Kentucky Governor Andy Beshear has been giving updates on the damage, deaths, and search for the missing. As of Dec.15, the death toll was at 74, with 12 of the victims being children. Estimates regarding how many homes are destroyed or damaged have not been released.

In Bowling Green, Sister Luke found herself comforting a young mother. The woman, originally from Eastern Europe, stood holding the hand of her 7-year-old child, sizing up her block which no longer had homes. She had lost everything, and a family member was in the hospital. The rest of her family was safe and sifting through what remained. Others in her neighborhood had not survived the storms, in this one area alone 15 people died, others were still missing. 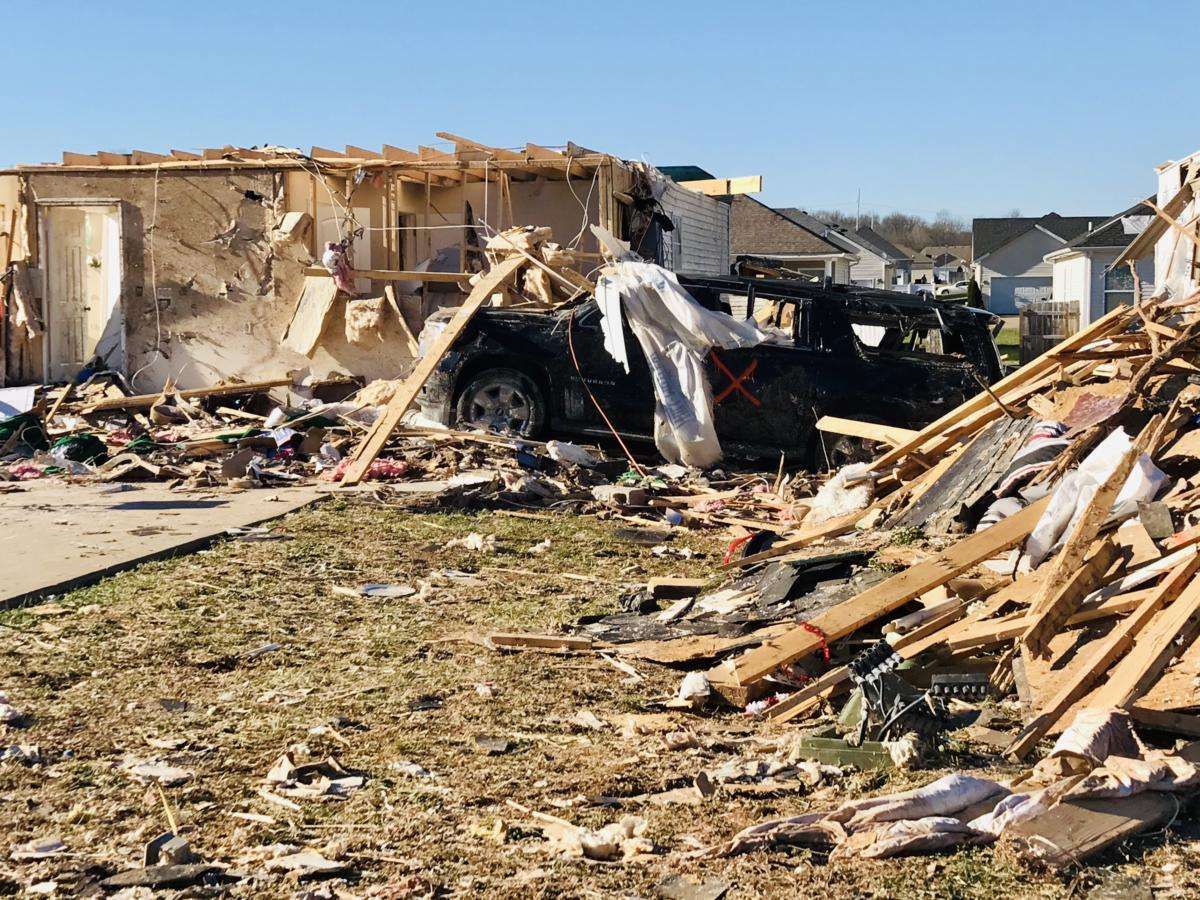 When Sister Luke and assistant director of disaster relief, Ellen Sprigg spoke with the Bowling Green assistant police chief to offer help, he told them that the focus at the time was rescue and recovery. He relayed that a staging area for volunteers would be opening shortly, and that clean-up would be massive and ongoing. Emphasizing a second time that accounting for everyone was the priority at the time.

At another neighborhood in Bowling Green, Sister Luke spoke with a man whose home had been severely damaged. Coworkers were helping remove debris and make temporary repairs. When asked if he needed help, he said he had been lucky, and he encouraged her to go to nearby neighborhoods where there were no longer homes standing. He did ask for prayers for an elderly man two doors down, who had to be rescued. The man had been recently widowed.

Respecting the Assistant Police Chief’s request, Sister Luke and Ellen waited for the volunteer staging site to open. There they found an outpouring of gratitude from local residents helping to run the center. The main gathering place for volunteers was near a whiteboard with a running list of areas where search and rescue efforts had been completed, buildings stabilized, and downed wires removed. Locations were listed that were now safe for volunteers to report to and assist with clean-up. 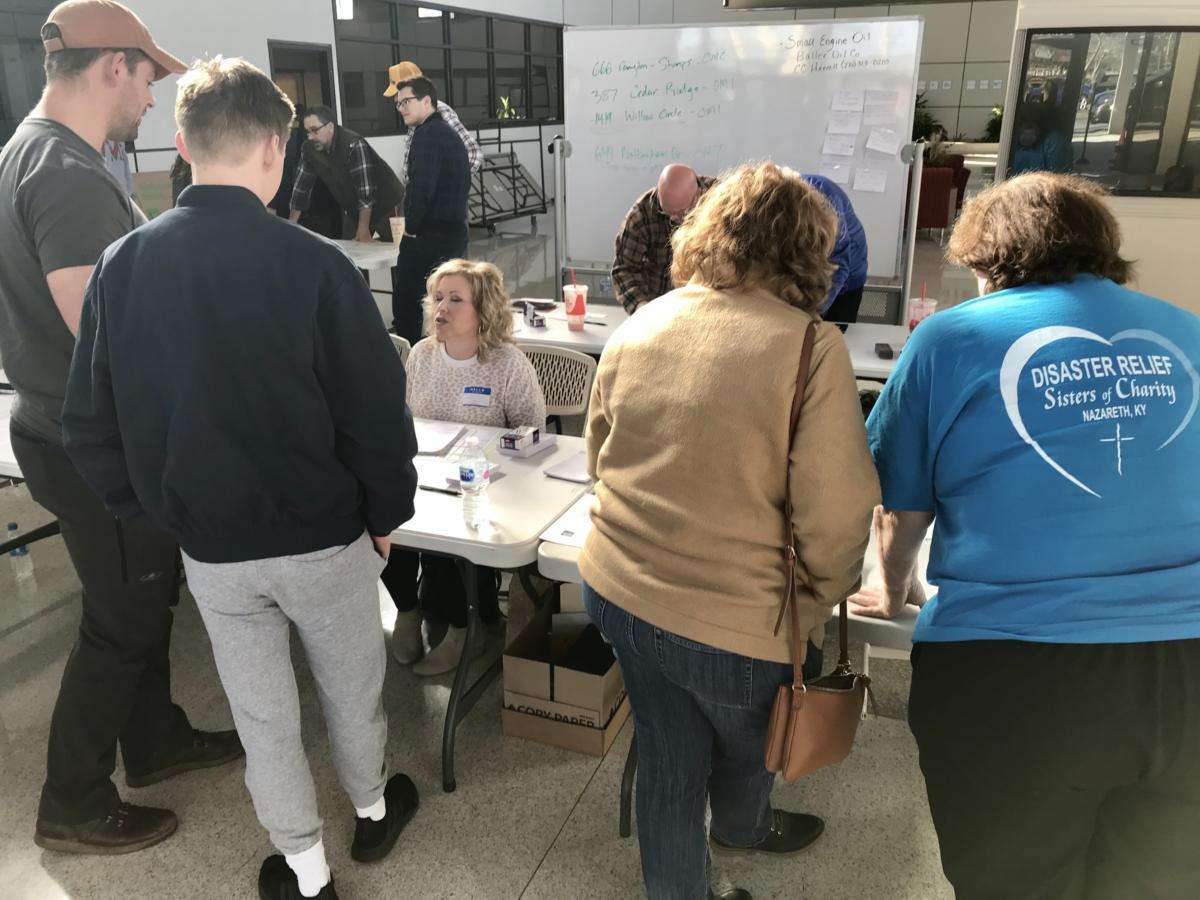 On Tuesday, SCN Disaster Relief team members were called up by local authorities in Campbellsville. Many farms had sustained significant damage with homes flattened and livestock dead or missing. In one area, tornadoes had hopscotched from farm to farm. SCN volunteers helped a young farm family pick through what remained of their home, looking for photos and mementos among splintered wood and piles of brick. The young daughter was hoping to find a tombstone she had made for one of their farm animals that had passed away.

Volunteers set about looking for a hand-painted rock with the name Buttercup. It was found just before the sun went down. On and off throughout the day, volunteers learned details about the young farmer. It was shared how when storms were moving in on Friday, the wife and children left the farm to shelter with other family members. The dad, who intended to stay at the farm to keep an eye on the house and livestock, decided to leave after all at his wife’s insistence. Not much of the home was left, part of the kitchen and a children’s bedroom, with no roof, was all that remained. Livestock that had not survived the storms could be seen strewn among family possessions. 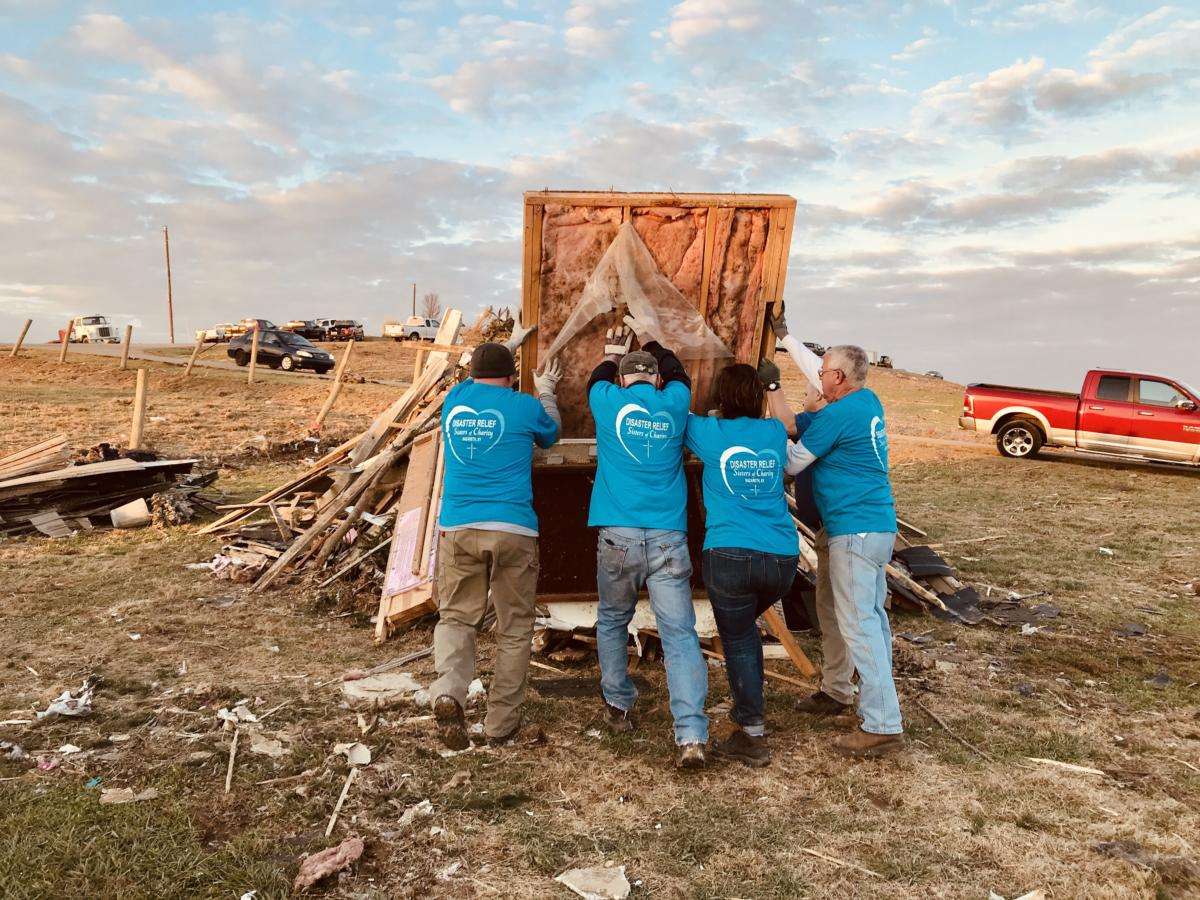 For Americorp volunteer and member of the SCN Disaster Relief Team, Julia Gerwe, the sadness and destruction was a lot to take in. She gingerly picked through the rubble looking for photos, school books, and Christmas keepsakes that had been put out just days before the storm. As she worked, the small pile of rescued items grew bigger.

Today, Wednesday, Dec. 15, the volunteers are back out at Campbellsville hoping to restore some normalcy. Each day volunteers debrief at the end of the day to identify what needs to be done the next day and to discuss where they should respond next. 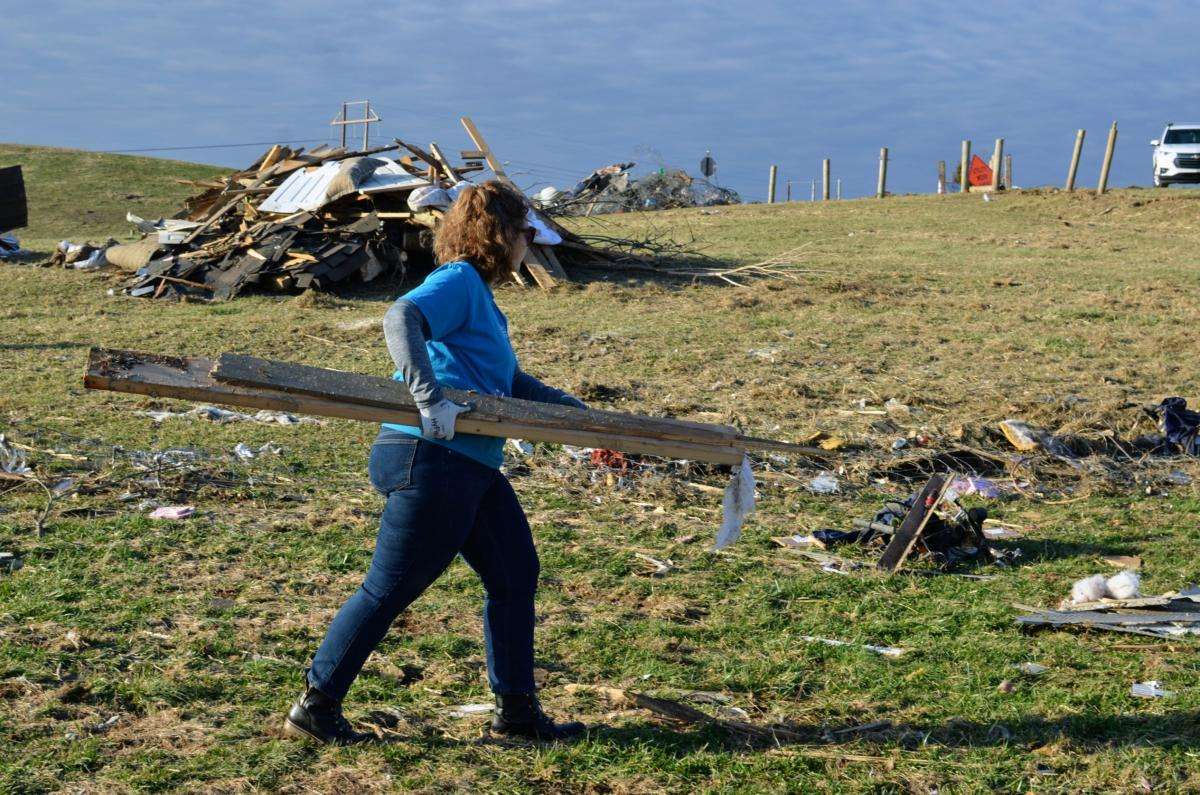 The Sisters of Charity of Nazareth, founded in 1812, have been responding during times of crisis for over 200 years. With the support and prayers of the Congregation, Sister Luke will continue to lead trained disaster relief volunteers to western parts of Kentucky. These men and women will provide cleanup, assistance, and meet any unmet needs of individuals and families grappling with this disaster.

If you would like to donate to these efforts, please do so. Please continue to keep everyone affected by this recent storm in your daily prayers.