Investing in the Louisville Urban League 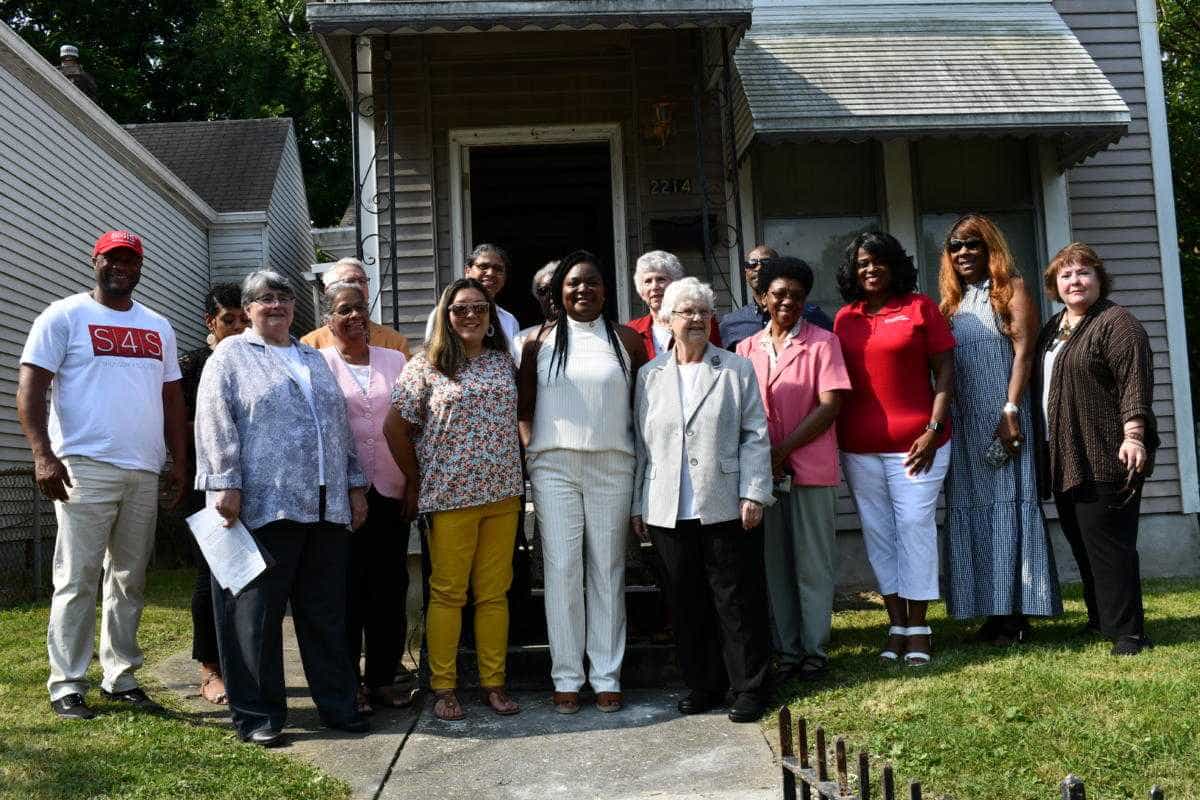 Today, Friday, June 18, in front of a home on Cedar Street in West Louisville, the Sisters of Charity of Nazareth announced a $2.5 million dollar investment in the Louisville Urban League and its “A Path Forward for Louisville” work.

Below is a press release from the Louisville Urban League. Reports have appeared on WLKY, WHAS, and WAVE today and there may be further coverage.

This gift will allow for 50 vacant and abandoned properties in the west end to be rehabilitated into affordable rental units over the next three years. In addition, each unit will be outfitted with energy-efficient doors, windows, insulation, HVAC, and appliances in an effort to minimize utility costs for renters, lower the Urban Heat Island effect, and reduce global warming. Rehabilitation work will begin immediately and units will be available for rent later this year.

“Everyone deserves a safe place to call home,” said Sadiqa Reynolds, President and CEO of the Louisville Urban League. “Families at 30% of area median income are led by the people who stocked the grocery shelves during this pandemic. These are the moms and dads who sought out free wifi so that kids could get their homework done. They are our neighbors.”

“Ordinarily, the Sisters of Charity of Nazareth do not make public the good works that we do,” says Sister Adeline Fehribach, SCN Vice President. “Hallmarks of our charism include humility, as well as simplicity and charity. However, we have agreed to make our actions public today, not to toot our own horn, but as a witness for others, with the hope that others might join us in similar actions that improve lives and build community.”

Over the past year, the Louisville Urban League and the Path Forward partners have made major strides raising more than $10 million dollars towards the implementation of the plan they laid out. Together, they are increasing production and raising funds for both affordable housing units and affordable rental units in the West End. Things are moving.

Various developers, like Sponsor 4 Success (S4S) and ReBOUND, Inc will have the opportunity to make use of the funding. As projects become available, funds will be dispensed. The goal is to renovate properties and get them into the hands of families as quickly as possible.

“S4S wants to improve the living and economic conditions of people living in the West End by offering residents a decent place to live and restoring dignity in the community,” said Butch Mosbey, President of Sponsor 4 Success. “Older houses in the West End have been neglected and newer houses are unaffordable for the average resident. Partnering with the Urban League on an affordable rental program gives us the opportunity to put properties in the hands of community stakeholders at affordable rates. We are thrilled to be involved!”

Kevin Dunlap, Executive Director of ReBOUND, Inc stated, “ReBOUND has been adding to the affordable housing landscape of the West End for almost thirty years and it feels like our work has never been more important than it is today. We are excited to have organizations like the Sisters continuing to invest in this deeply important work.”

The housing landscape in Louisville is in desperate need of investment and intentional intervention. There is an extreme shortage in affordable housing stock and the number of evictions are a growing crisis across the city. Investments like that of the Sisters of Charity of Nazareth make a real difference in the lives of families who need it most.

“Today, we are standing in front of a home that will soon directly respond to our city’s greatest housing need,” Reynolds said. “We partner with the Sisters of Charity of Nazareth whose mission recognizes the interrelatedness of all creation. Together, we can and must meet the needs of families, one home at a time.”

About the Louisville Urban League

The Louisville Urban League assists African Americans and those at the margins in attaining social and economic equality and stability through direct services and advocacy. For more information, go to lul.org or follow us on Facebook, Twitter (@louisvilleUL), or Instagram (@louisville_ul).

About A Path Forward for Louisville

In response to a global pandemic and social unrest locally and across the country, a group of Black non-profit leaders representing and/or providing service to large portions of Louisville’s Black community, came together to discuss innovative opportunities for the city to remedy the damage done by decades of redlining and systematic oppression. The resulting petition to the city and demands for investment has been signed by almost 100 partners and allies, representing more than 70 organizations across the city. Learn more at apathforward4lou.org.