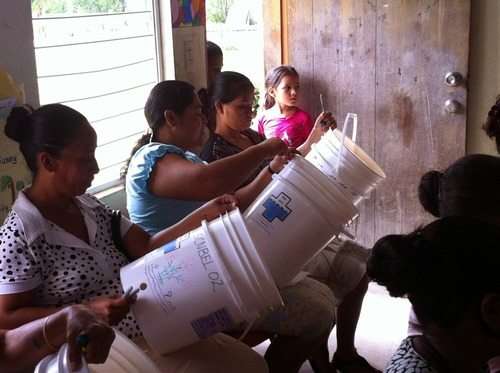 Sister Barbara Flores, SCN, and her willing assistant and partner in ministry, Celia Usher, piled 20 white buckets and 2 large bags of Sawyer Water Filters into their vehicle and set out toward the rural St. Margaret Village to what turned out to be a very blessed afternoon. As the team of two approached the village they pondered on the thought that no one would know just by driving through the village which boasts beautiful background hills, and lush green trees and grass, that the children of this village suffer from a dire lack of clean drinking water, often going thirsty, and are living with the risk of water carrying diseases. This was the mission of the day … in partnership with the U.S. based ministry of Water with Blessings …to begin to change that.

They were warmly welcomed to the St. Margaret Mary Catholic School by Mr. Estevan Peck, the Principal, Mrs. Patricia Perez, a teacher who coordinated and planned for the afternoon from within the village, and 20 mothers of the children attending that school. The mothers were gathered, with anticipation on their faces. There was a blend of shyness and excitement in their welcoming smiles, and in their hearts Sister Barbara and Celia immediately confirmed that they were in the right place. Clinging to their mothers or playing on the floor were beautiful, adorable little children, some chubby gurgling babies, who looked curiously at all in the room.

These mothers were there because they had been invited to be Water Women and had said yes. A water woman is a mother of young children who agrees to use the tools and training gifted to them through the Water with Blessings program to provide clean drinking water for her family and one other family.

The central theme of community shared with the 20 women was quickly embraced. There was deep hope in the eyes of these mothers as they realized they will be able to put a cup of clean bacteria and virus free water to the lips of their little ones starting that very day! They realized it was simple, all they needed was a bucket and a filter kit, both of which they were being provided with by the visiting team. The committed heart which was also required was already within them all.

The afternoon proceeded with prayer, each woman understanding the meaning of being a Water Woman, learning to use and maintain the Water Filter and confirming her commitment to the mission of providing clean water to her family and a neighbor. As Sister Barbara handed out filters to each woman present, the humility and appreciation with which they were received was touching.

Smiles, words of praise, laughter, and encouragement filled the room as the women decorated their white plastic buckets, assembled their water filters and connected them to their buckets. They proudly posed for photos to mark the historical day. It was actually a celebration. They celebrated water, the source of life and God’s precious gift. They celebrated the hope in their hearts. And they expressed their gratitude many times. These women became family that afternoon. God’s love for them and all they hoped for made them one.

As the women set off across the school field to their homes, it was with babies on hips and buckets in hand. They were proud to be Water Women. Some had miles to walk before reaching home, but each was excited to go filter their first cup of water.

Sister Barbara and Celia, though hot and thirsty had hearts that had been humbled, full of love, thankfulness and awe for the experience as they head back to Belize City. They chuckled at their brave and successful attempt of imparting the entire session in Spanish, neither of their first language. The car seemed empty without all the buckets, but they spoke about filling the car again soon, and making it possible for clean water to be sipped by more of God’s thirsty children.