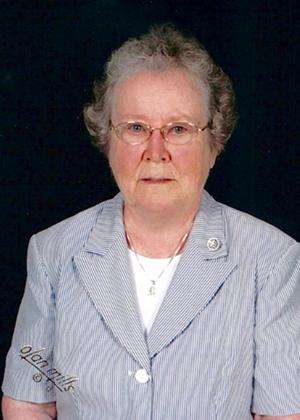 In 1967 she earned her bachelor’s degree in elementary education, and in 1971 earned a master’s degree in elementary education with a minor in math and social studies. Both degrees were earned from Spalding College in Louisville. Sister Mary Naomi was a certified catechist and director of liturgy. In 1985 she was named an honorary Kentucky Colonel.

She used her education to serve in teaching positions at the grade school level. In Louisville, she taught at St. Phillip Neri, Most Blessed Sacrament, St. Agnes, St. Martha, St. Raphael, and St. Cecilia. She taught first and second grades at St. Catherine of Siena in Ft. Thomas, Ky; Newport, Ky; and Sacred Heart School in Bushwood, Md. She also served as the principal of Sacred Heart grade school in Richmond, Va.

She once said that her years at Sacred Heart (1953-1966) were the best years of her life. She said, “our spiritual life was supported by wonderful diocesan priests and the Bishop of the Diocese.” She adds that the school population encompassed families from all economic backgrounds, “from the very poorest to those with considerable means.” She recalled the challenging mission on John’s Island in the Diocese of Charleston, South Carolina. She worked with African-American children over the summer to prepare them to enter the recently integrated schools that fall. She realized six weeks was not enough time, but the Bishop said, “Be present to them,” and those words stayed with Sister Mary Naomi throughout her years.

From 1975-1981, Sister Mary Naomi was parish secretary at St. Francis of Rome in Louisville, Ky. For nearly 15 years, she served as a secretary and administrative assistant at Our Lady of Peace Hospital in Louisville before moving to Tennessee to care for her older sister for the next 11 years.

Upon returning to Kentucky, Sister Mary Naomi volunteered her time at St. Gabriel in Louisville. She served her SCN Community as a member of the Marie Menard Committee, which collects and shares the life stories of each Sister of Charity of Nazareth.

She is survived by her brother, Jack Elder of Louisville, her extended family, and her religious community, the Sisters of Charity of Nazareth.

Burial arrangements were as follows: