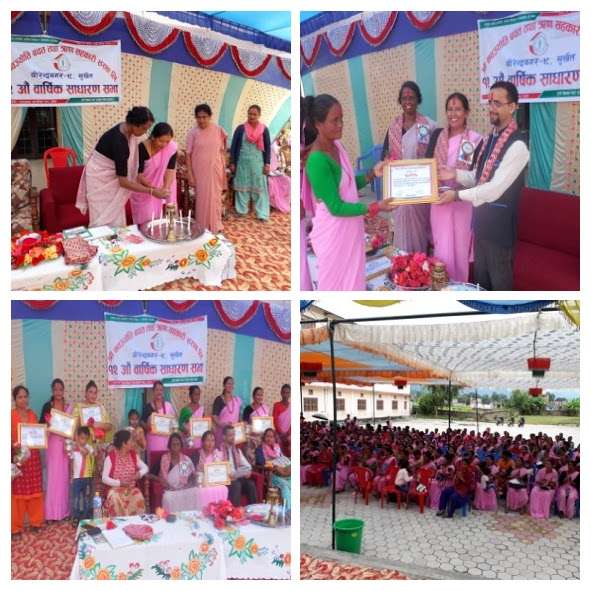 Navjyoti Saving and Credit Cooperative in Surkhet conducted its 12th general body meeting in Navjyoti Center compound on 28th of September. Chatra Dhamal, the officer in charge of NEFSUN (Nepal Federation of Savings and Credit Cooperative Union Ltd.) Karnali province was the chief guest for the occasion. There were about 700 people present for the gathering including women’s groups, shareholders and children having child savings with the cooperative.

Navjyoti Cooperative has 868 shareholders among them 763 are women, 51 men, and 54 groups. The cooperative which was started in 2007 with 30 shareholders and very little capital today has over 3 crores. Five women staff are employed in the cooperative including three office staff and two market representatives.

Annual reports of the cooperative and its various sub-committees were read out by the chairpersons of the committees. The chief guest commented about the transparency of the cooperative which has been successful in providing various services to the members in economic, social, educational fields and for reaching out to them by sharing their joys and sorrows. He remarked that he experienced a family spirit in this organization which he did not find elsewhere.

As a whole, there was an atmosphere of achievement in every face as they recalled the past when they struggled to save Rs. 10 a month. Now they are able to save Rs. 500 to 1,000 a month from their own earnings. For them, Navjyoti has been a real light in the darkness as they groped from deprivation to economic prosperity and as empowered citizens.