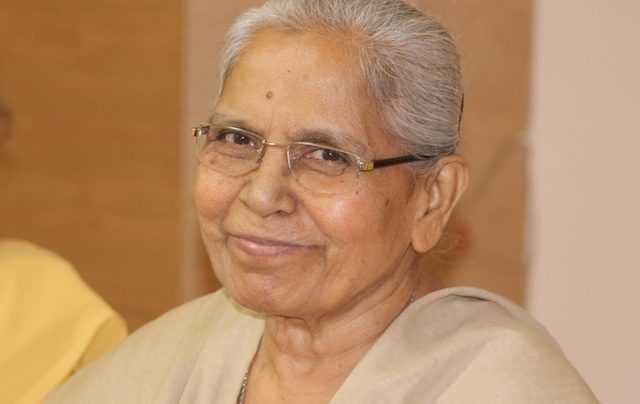 A native of Dindigul district in Tamil Nadu, India, Mary Stella Ambrose, SCN, was born on December 4, 1937, the eldest of seven children to her parents, the late Mr. A. Ambrose and Mrs. Maria Prakasi. She died at 2:45 a.m. on Jan. 13, 2019, at Nazareth Convent Chandapura, Bangalore.

After her school education at St. Joseph’s High School, Dindigul, Sister Mary Stella pursued teacher education and worked in the beautiful hill station of Kodaikanal as a teacher. She later moved to the capital city of Chennai where she taught the visually-challenged children after being trained for the same. It was this experience that urged Sister Mary Stella to serve God in humanity. She began her religious life in June 1961, in the Congregation of Immaculate Conception (CIC), a then diocesan Congregation, popularly known as Madurai Blue Sisters. The compassionate ministry with the blind led her to pursue her studies in B.SC. Nursing at Mercy College in Detroit, Michigan. After her studies, she worked for a year at Mount Carmel Mercy Hospital, Detroit. Upon her return, Sister Mary Stella founded a Leprosorium at Battalagundu, Dindigul, beginning her pioneering work.

Having made discernment her way of life, Sister Mary Stella dared to obey her inner promptings to be a missionary in North India. With grit, wisdom and being attuned to God, she obtained a transfer to the Congregation of the Sisters of Charity of Nazareth in 1976 in Mokama, after three years of discernment with the then Provincial Teresa Rose Nabholz, SCN. According to Sister Mary Stella, “I want to be in a place where I can be happy.” She made her Final Vows as an SCN on May 28, 1978.

Since then she served in the ministry of health in Mokama, India as Tutor, Assistant Director and Director of Nursing Service from 1978-1986. She served as Administrator of Community Health Centre Bakhtiarpur from 1986-89.

During her days as a missionary, Sister Mary Stella taught the visually challenged and hearing impaired in Madurai, Trichy and Bangalore, India. In 1991, Sister was entrusted with finding a suitable place in the South for the expansion of SCN mission and she duly located the present Snehalayam plot of land in Trichy and later in Crawford, the school and centre for the specially-challenged children. She was, once again, called to serve in Nazareth Hospital Mokama as a tutor. Her selfless service to the Nursing students was so praiseworthy that she is remembered for expecting perfection and nothing less than the best out of her students.

She celebrated her Golden Jubilee as a religious in 2013, with the SCN Family in Chandapura, Bangalore thanking God for being faithful to her all through her life. She continued to serve the children in Crawford until she was called to serve as the School Nurse at Nazareth School, Chandapura and to take care of the retired and sick Sisters in Bangalore.

Sister was diagnosed with breast cancer in June 2018 and succumbed to it on January 13, 2019. Sister Mary Stella was God-fearing, spiritual, kind and caring. She was also quite intelligent, efficient and determined, simple, community minded, hard working, neat, tidy, orderly, disciplined, and enjoyed responsible freedom. Her enduring power and trust in God was admirable.

Creativity and finesse were the hallmark of Sister Mary Stella, be it cookery, artwork, knitting, or wellness treatment through natural methods. She passionately strove to be true to her call. Her example has been a motivating force for several young girls from Tamil Nadu to leave the familiar and launch out in mission by becoming Sisters of Charity of Nazareth. Sister Mary Stella was a true pioneer in more ways than one and even in her final journey, she pioneered her way to our God.

“Rejoice, you highly favoured one, the Lord is with you and enter into the eternal reward awaiting you.”