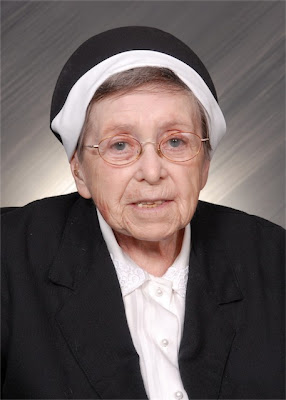 Sister Mary Grace was born in Rankin, Pa., and entered the Vincentian Sisters of Charity from St. Barnabas parish, Swissvale. She received a Master of Education degree from Duquesne University and taught for 22 years in elementary schools throughout the Dioceses of Pittsburgh, Greensburg, Youngstown, Ohio and Mobile, Alabama.

When Sister Mary Grace was assigned to work in Canada, she studied at York University in Toronto and received a Bachelor of Arts in Administration as well as a principal’s certification. During her 23 years in Canada, she served as teacher and principal in four different schools in Scarborough, Ontario.
When Sister Mary Grace reached the mandatory retirement age in Canada, she returned to Pittsburgh and ministered in social service, pastoral care, medical records, driving and switchboard. For the past 10 years, she has been a part of the prayer ministry at Vincentian Home.

Sister endeared herself to others by her gentle ways and inspired them with fervent desire “to be with God for ever and ever.”

Sister Mary Grace was predeceased by her parents Anna and Andrew. She is survived by her sister-in-law Patricia Yesko, nephew Frank Yesko, niece Lorraine Grace Whited, grandniece Francine and all her sisters in Community.