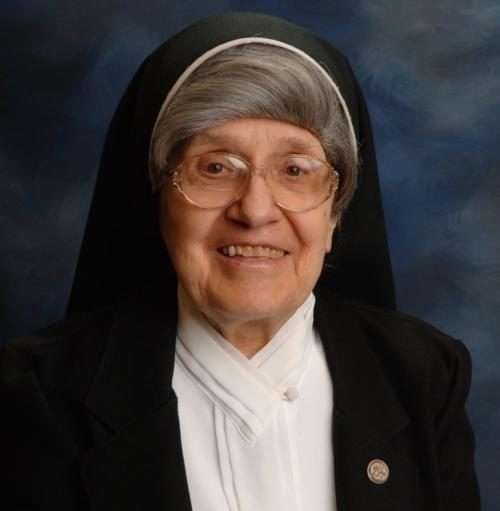 Sister Mary Clement Pavlik, a Sister of Charity of Nazareth, was called to her heavenly home on Oct. 29, 2021, at the age of 105 and in the 91st year of her religious life. Sister entered the Congregation of the Vincentian Sisters of Charity from St. Matthew Parish in Southside Pittsburgh in 1930.

Sister Mary Clement spent most of her years in the Congregation, serving in nursing ministry. In 1940, she received her RN degree from St. Francis Hospital in Pittsburgh, PA, followed by a BS in Nursing Education from Duquesne University. For one year, she served at the Vincentian Home, after which she was assigned to medical and surgical ministry at St. Vincent Hospital in Monett, Missouri. Seven years later, she became Personnel Director at St. Jude Hospital in Montgomery, Alabama.

In the interim, she attended St. Francis School of Anesthesia to become a nurse anesthetist. In 1957, she received her Master of Nursing Education degree at St. Louis University in St. Louis, MO, and in 1958, she was appointed administrator of St. Vincent Hospital in Monett, MO, in the Diocese of Springfield-Cape Girardeau. She remained there for 17 years, after which time, she returned to the Motherhouse of the Vincentian Sisters, to serve as Councillor of Temporalities for two terms. Until her retirement, Sister was Health Coordinator for the Sisters at the Motherhouse. Her post-retirement years were spent at Lourdes Hall in Prayer Ministry until 2019, when she was transferred to skilled nursing care at Vincentian Home.

Besides her service in the nursing field, Sister was noted for her quick wit and great sense of humor. She still remained physically active in her final years. She read the newspaper daily and rarely missed any community meetings, entertainment, and activities, especially bingo. Sister spent much time communing with the Lord in the Oratory at Lourdes Hall.

Sister Mary Clement was predeceased by her parents, Joseph and Mary Pavlik, her brothers Rev. Clement Pavlik CP, John, Michael, and William, and her sister Margaret. She is survived by her nieces, great-nieces, and nephews, along with her Sisters in Community.

Family and friends will be received at the Sacred Heart Chapel, St Louise Convent at 8200 McKnight Road on Saturday, November 6th from 9 AM to 11 AM followed by the Mass of Christian Burial. Her interment will be in the Sister’s Cemetery on the convent grounds.

Memorial donations may be made to the Sisters of Charity of Nazareth, Office of Congregational Advancement, PO Box 9, Nazareth KY 40048-0009.