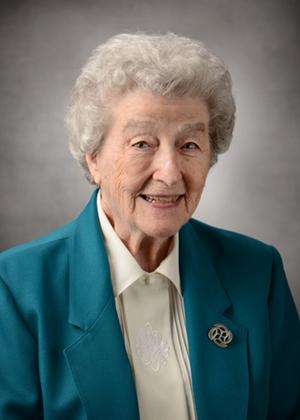 Born the middle child, Sister Martha grew up with her older sister, Mary, and younger brother, Joseph. The family attended their neighborhood church, St. James. Her father, Louis, was of German background. His family created a home goods store on Market St. in Louisville called “Geher and Son.” Her mother, Evelyn, was of Irish descent, born in Louisville. As an adult, Sister Martha was able to visit Ireland, saying, “What a thrill it was for me to ride along the streets my ancestors had walked and to visit the homes and places I had only heard about till then.”

Sister Martha served in educational ministries, teaching biology and English to high school students at Sacred Heart in Memphis, Tennessee; at St. John Central in Bellaire, Ohio; and Mercy Academy in Louisville. Her interest in biology led her to study Hospital Administration at St. Louis University, earning a Master’s Degree. She developed her skills via internships at Mt. Carmel in Columbus, Ohio, and St. Mary’s Hospital in Evansville, Indiana. In August of 1964, she was assigned to St. Joseph Infirmary in Louisville, Kentucky as an assistant administrator and, within six months, became the administrator. She was soon honored to become an American College of Hospital Administrators member.

Sister Martha continued in health care ministries as a senior hospital administrator for the Kentucky Department of Health. In 1974, she earned a Master’s Degree in Community Development from the University of Louisville. She served as a teaching director for Kentuckiana Metroversity, working with students to study the community’s health needs. She then was a specialist for children’s services at Central State Hospital. From 1979 to 1987, she served in leadership positions at St. Joseph Hospital in Lexington, Kentucky.

She served her SCN Community in many ways. She was elected to a five-year term as regional of the Sisters in the Louisville area and was chair of the SCN Health Commission. In 1984, Sister Martha traveled to Mokama, India, for six weeks to help her Sisters transition to a new hospital, developing a plan for both the move and the organizational running of the new hospital. Sister Martha called this experience one of the most satisfying of her life and remained committed to her Sisters in India, and the SCN ministries there, throughout her life. Upon retirement, she volunteered with local parishes and the St. Vincent de Paul Society. She visited the sick and assisted her SCN Congregation.

Visitation was held Tuesday, July 26 at 9:30 a.m. in the Columba Room and the Funeral Mass followed at 10:30 a.m. Burial was in the Nazareth Cemetery. The Mass can be viewed below.

Funeral Arrangements are being handled by Ratterman Funeral Home, 3800 Bardstown Road, Louisville, Ky. Memorials may be made to Office of Mission Advancement, P.O. Box 9, Nazareth, Ky. 40048.