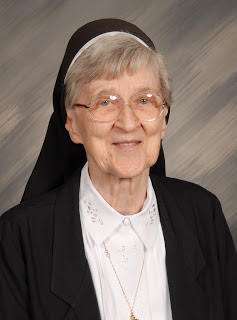 John Gabriel Kostelnik, SCN, passed into eternity on September 30, 2015, at the age of 93, and in the 76th year of her religious life. Sister originally entered the Congregation of the Vincentian Sisters of Charity from St. Florian Parish in United, Pennsylvania in 1939.

Sister John Gabriel received her Bachelor and Master degrees in Education from Duquesne University and served the Church as an elementary teacher and principal in the Dioceses of Pittsburgh and Greensburg, Pennsylvania, Youngstown, Ohio, and Mobile, Alabama. Sister’s last teaching assignment was at St. Sebastian School where she taught for 24 years. After her retirement from teaching, she served as a telephone operator at the Motherhouse of the Vincentian Sisters of Charity. Because of ill health, Sister John Gabriel resided at the Vincentian Home until recently when she returned to St. Louise Convent where she peacefully passed away.

Sister was known for her gentle manner, ready smile and laugh. She had a deep love for children and God. After teaching all day she would then offer her services as a CCD Catechist.

Sister John Gabriel was preceded in death by her parents Michael and Anna Kostelnik, and her siblings, Sister Canice, Michael, John, Joseph, Mary, and Sister Seraphine. She is survived by her sisters, Sister Antoinette, Catherine Hahos, and Margaret Klimchock, nieces and nephews, and her Sisters in Community.