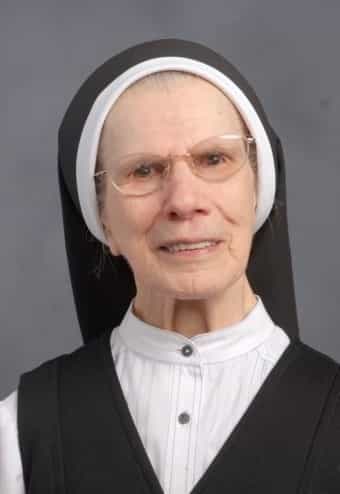 John Ann Kulina, SCN, 103, (formerly Anna Marie) was born in Blaine, Ohio. She died March 6, 2021, in Nazareth, Kentucky, one month short of her 104th birthday. She was a professed Sister of Charity of Nazareth for 73 years.

Sister John Ann served her SCN Community at the Motherhouse, assisting in the Nazareth kitchen beginning in 1948 and eventually leading the department. Her culinary skills led her to supervisory positions in the dietary departments at St. Peter Orphanage in Memphis, Tennessee, as well as St. Joseph Infirmary and St. Thomas-St. Vincent Home, both of Louisville, Kentucky. Her gifts in organization combined with a mild manner won her the admiration of coworkers, management roles in every location as well as the hearts of many-especially of the children at the orphanages where she served.

In 1983 Sister John Ann began serving as a sacristan at St. Vincent Church at Nazareth. She served in this position until March of 2020.

She is survived by her brother Frank Kulina, her nieces and nephews, her extended family, and by her religious community.