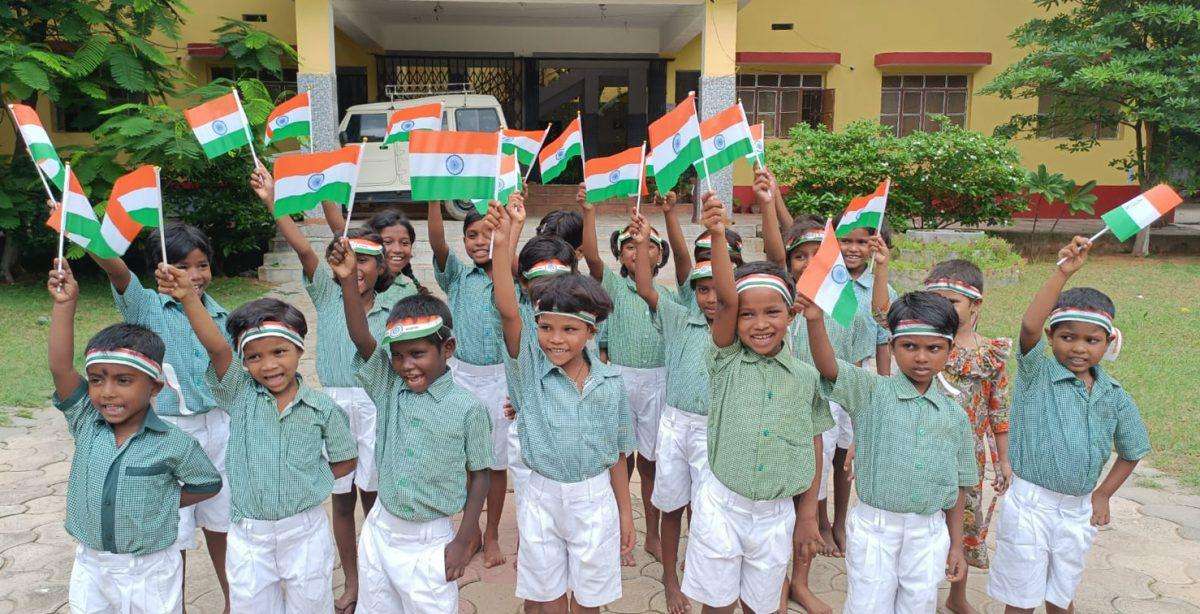 On Aug. 15, 2022, the country of India celebrated its 75th Independence Day. Below, the Sisters of Charity of Nazareth share how each of the schools in India marked the occasion:

To mark this historic event (Ajadi Ka Amrit Mahotsav), Nazareth Academy organized a colorful program with varieties of patriotic dances, songs, skits, and yoga, to name a few. On Aug. 13, the students and teachers took out a flag march to the town. The honorable chief guest of the day was Sister Josephine Kisku, SCN, the education director of Patna Province. She hoisted the national flag and gave an inspiring speech exhorting the audience to be truly free from heart and mind and to work for the integrity of the country. 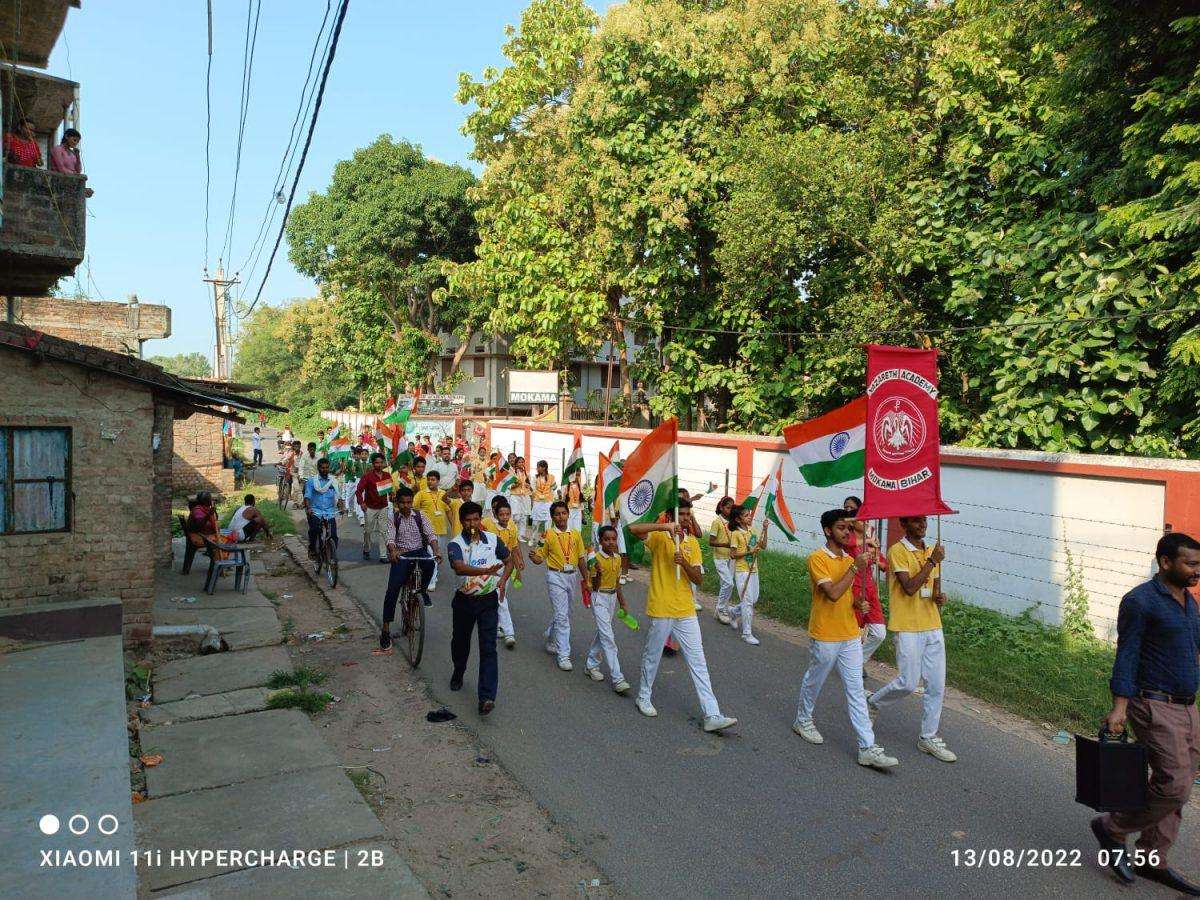 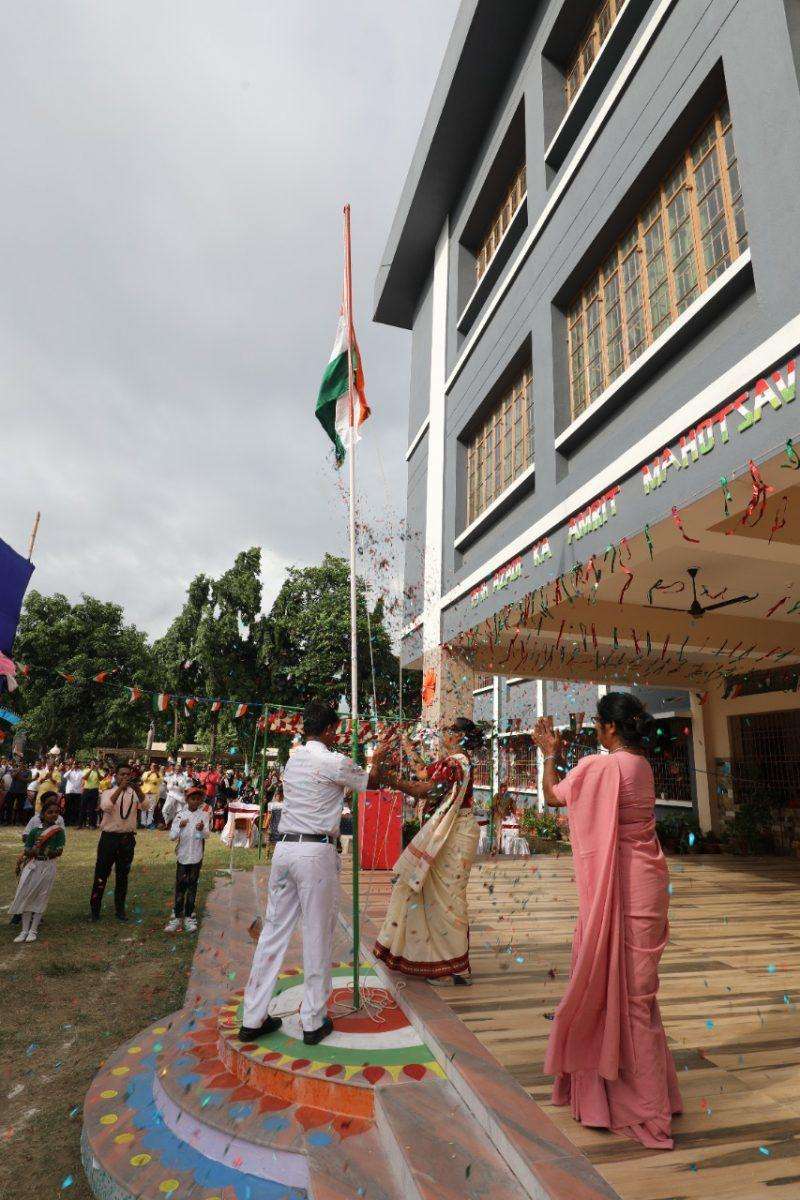 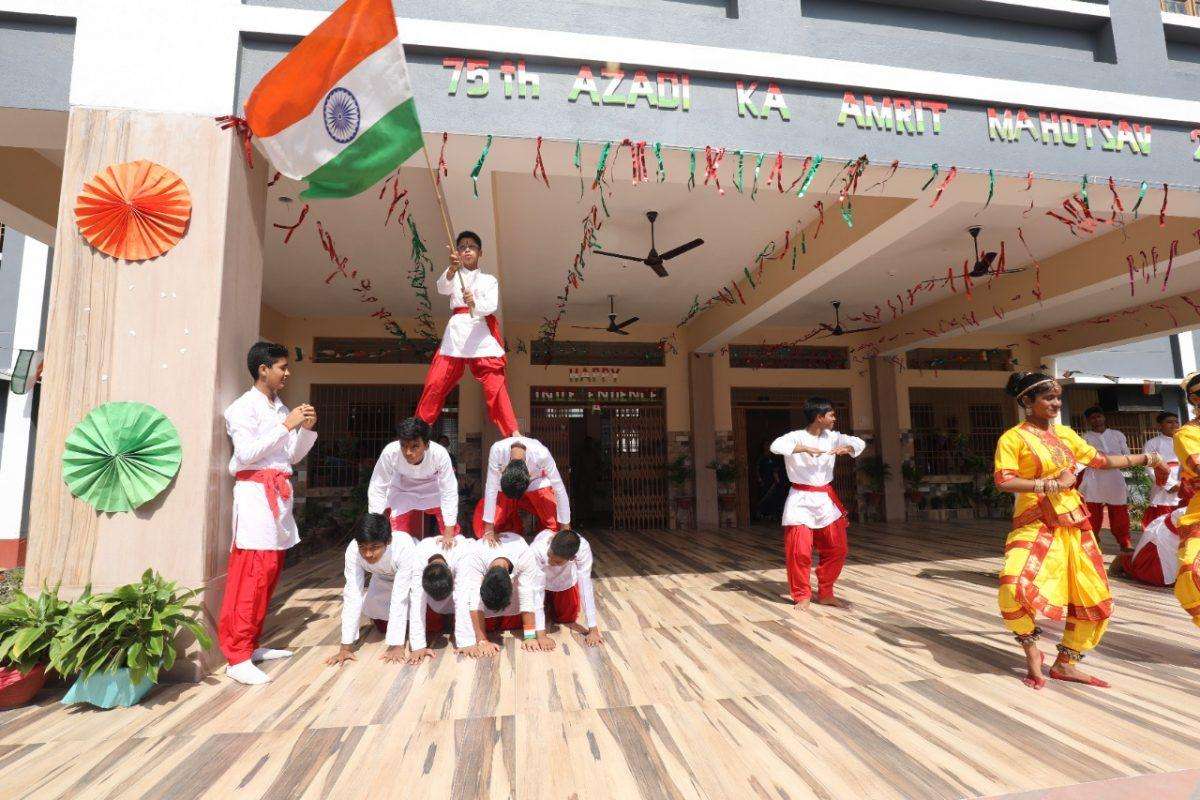 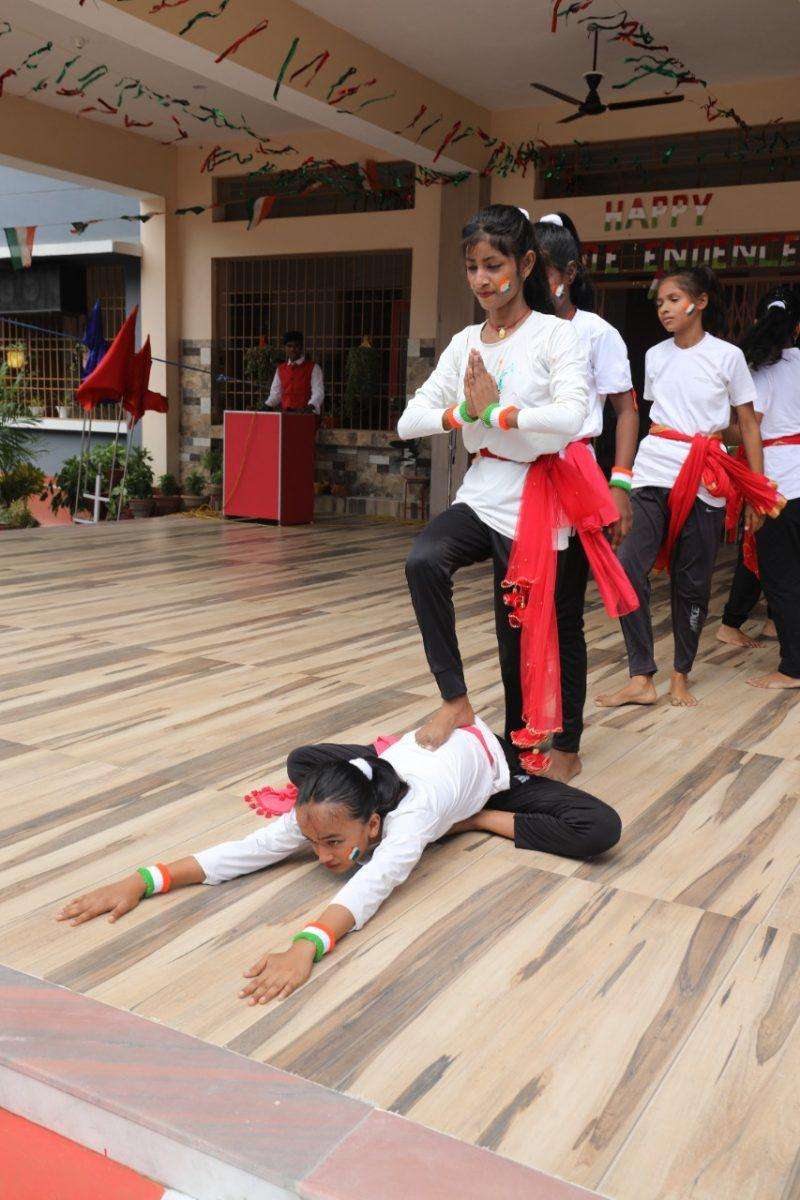 Independence Day was celebrated here with much joy and enthusiasm. The chief guest for the day’s function was Mrs. Nisha, a Zila Parishad member, and a former Nazareth Vidya Niketan student. In her speech, Mrs. Nisha became nostalgic about her student life and expressed gratitude for being part of this great institution. She encouraged the students to work for the country by letting go of their differences.

The event also showcased the talents of students that including dances, songs, speeches, and skits. The skits put up by the senior sections based on Subhash Chandra Bose and the terrorist attack at Uri were the highlight of the day. The audience tried to hide their tears. The students’ impressive act stirred everyone with the spirit of patriotism. At the end of the function, all were grateful to the Almighty for holding up the rains above us and showering it only after the program ended.

“Prabhat Pheri,” ‘which means early morning rounds, is a tradition or a ritual lost in the facade of modernization. It is believed that this ritual invoked the good spirits and would chase the evil spirits of the night, further welcoming the morning with good vibrations. The local administration of Chatra town had organized Prabhat Pheri this year, too. The students were part of this great awakening as the country celebrated its 75 years of freedom. The patriotic spirit of the students was very much seen in their active participation in the rally. The teachers and the Sisters offered floral tribute to the freedom fighters, Subedar Jai Mangal Pandey and Nadhir Ali Khan at “Phansi Talab.”

The 75th year of independence was celebrated at Nazareth Academy Gaya with great enthusiasm and respect. The school campus was decorated with tricolor balloons, which captured the attention of all who walked into the campus. Sister Sophia Joseph, the principal, hoisted the flag at 8 a.m. in the presence of students and staff. In a cultural program that followed, the school leader, Om Shukla, and teachers Mrs. Akanksha Anand and Mrs. Shreyashi took everyone down memory lane as they spoke about freedom fighters who played important roles in Indian independence. The students sang patriotic songs and performed dances, which awakened everyone’s feelings of patriotism toward the Motherland.

Participants were honored by the presence of alumni Shubham Kumar, 2010 batch, an officer (BDO) of Bihar government. In his short speech, he gave the students two guiding principles: To be honest to oneself and to invest in the process, not in the result. The program culminated with “Saare jahan se achha,” sung by the whole school. The children were happy to receive sweets that brightened the day for them. 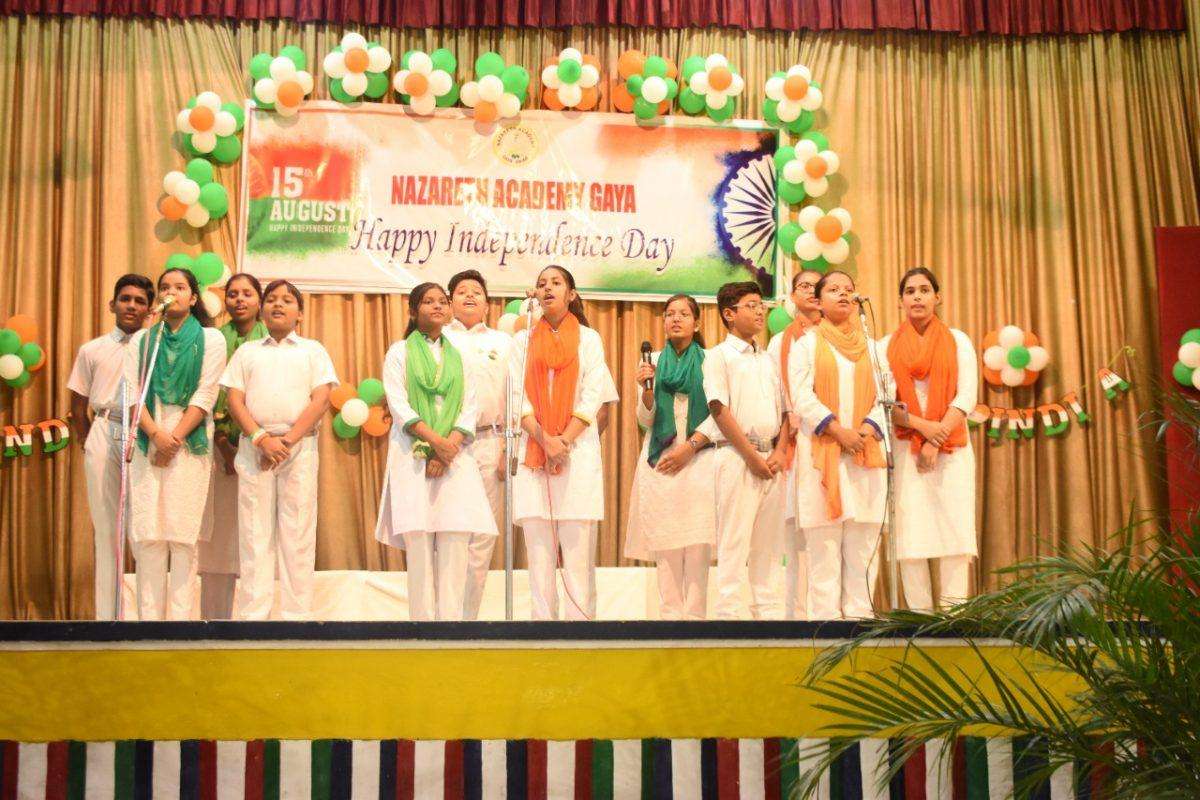 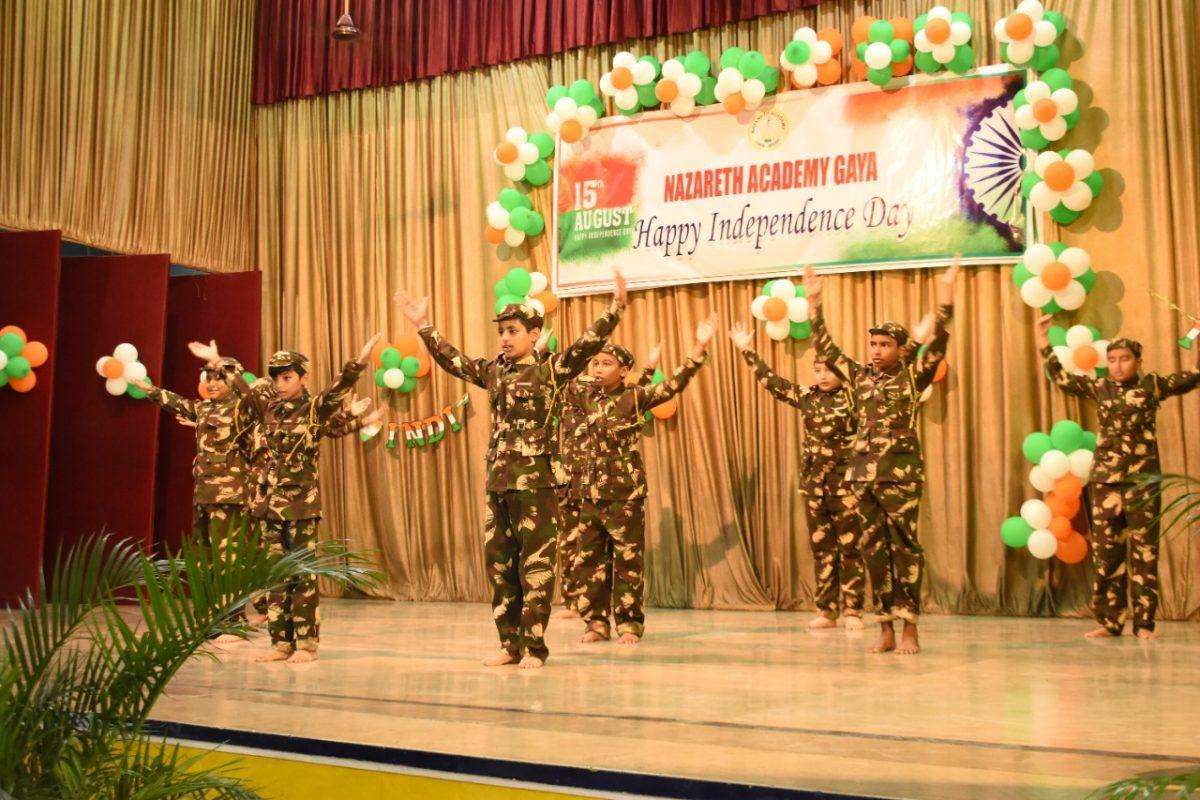 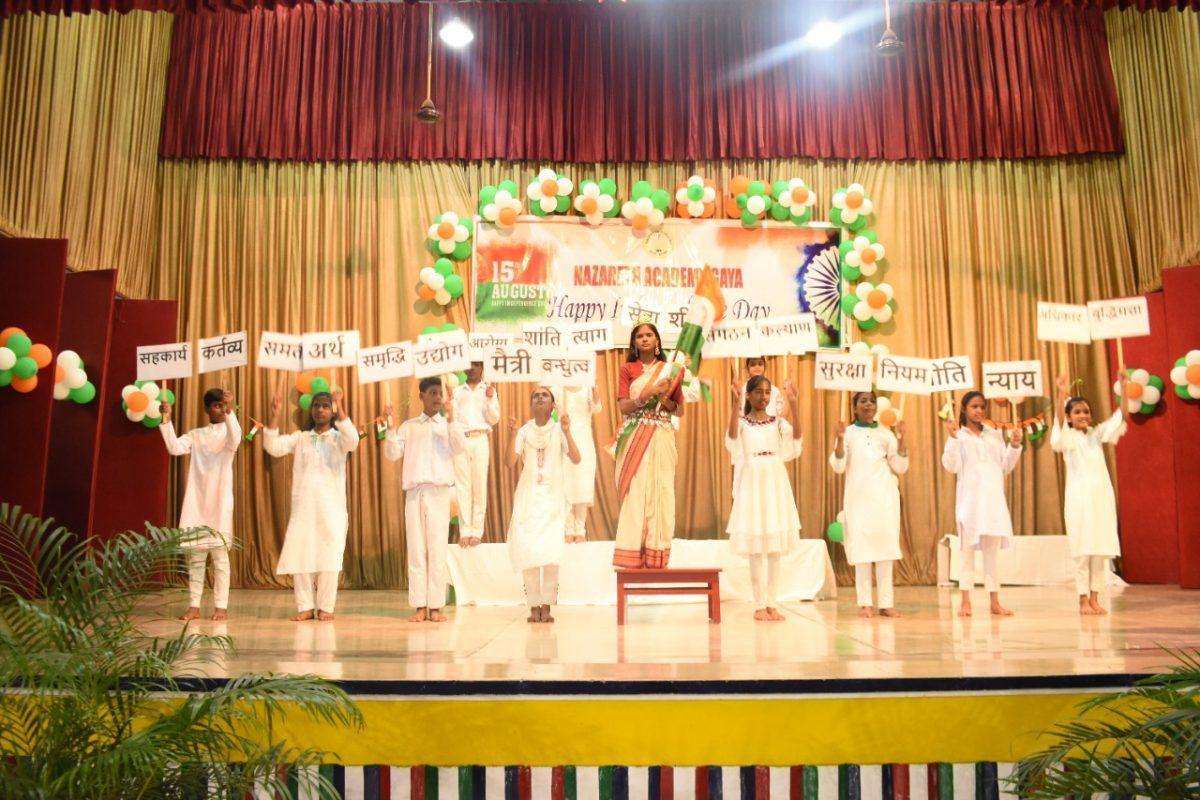 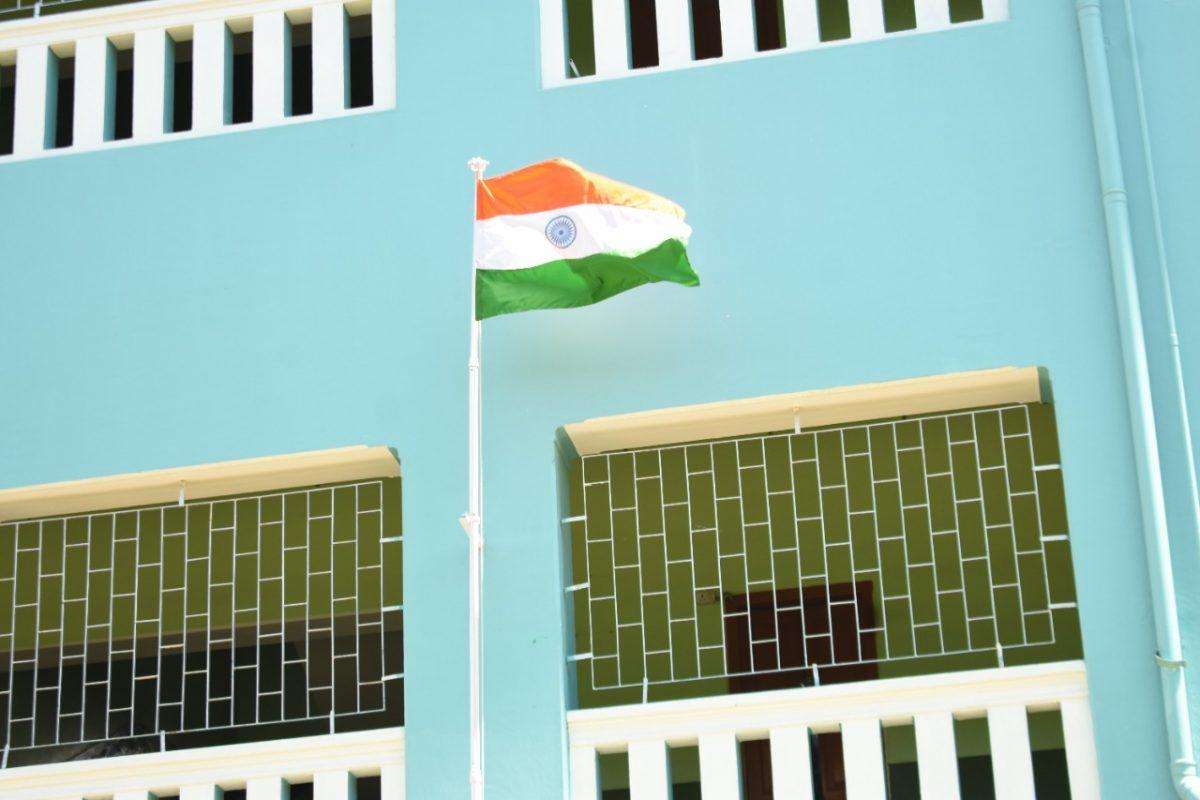 Under the Gaya Nazareth Academy outreach program, the remedial class students who attend the evening classes at the campus had an early celebration of Independence Day with various competitions such as the singing of patriotic songs, drawing, and a general knowledge quiz on the nation. The weeklong celebrations culminated on Aug. 12 with a cultural program. It was also used as an occasion by the NOSA members to distribute stationery items like school bags, geometry boxes, books, etc., to these children.

Mrs. Abhilasha Sharma, the municipal commissioner of Gaya, was the chief guest for the occasion. She distributed the prizes to the winners of the various competitions and praised NOSA for organizing such activities. She congratulated Gaya Nazareth Academy for the facilities and experiences provided for underprivileged children. 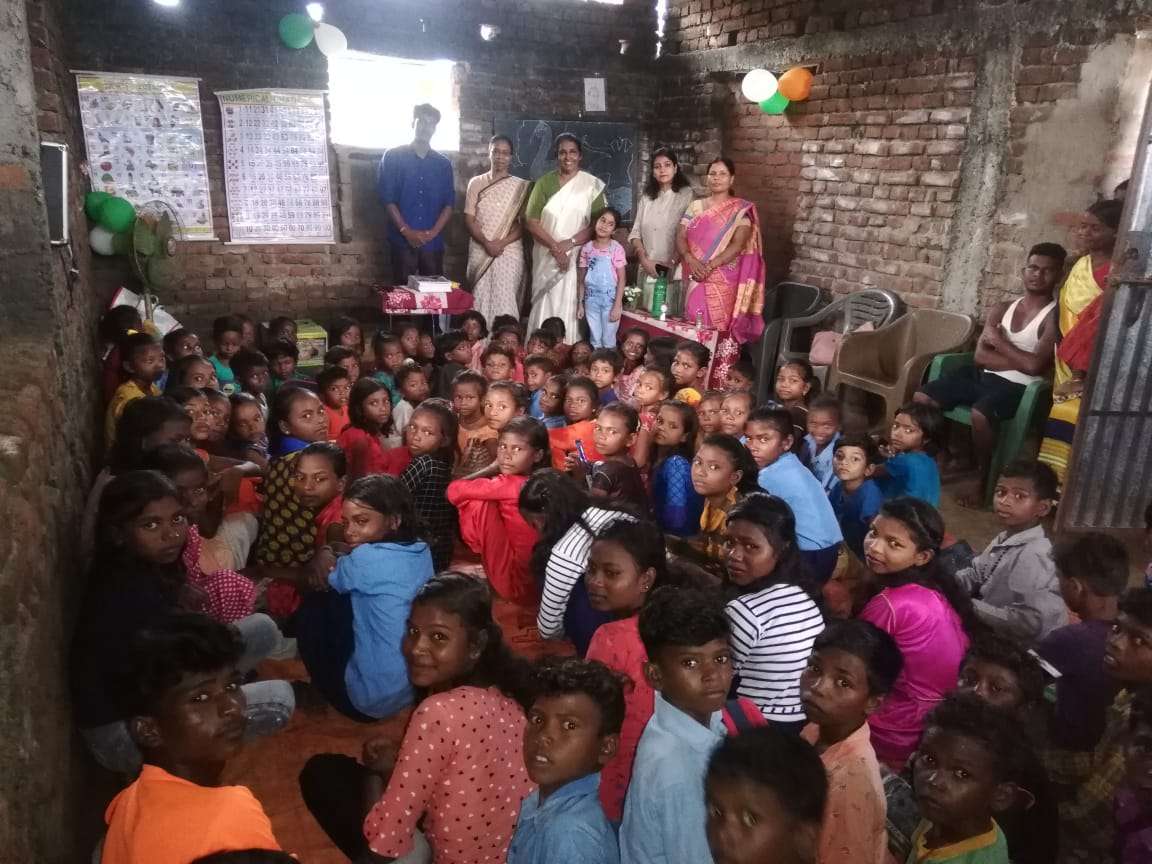 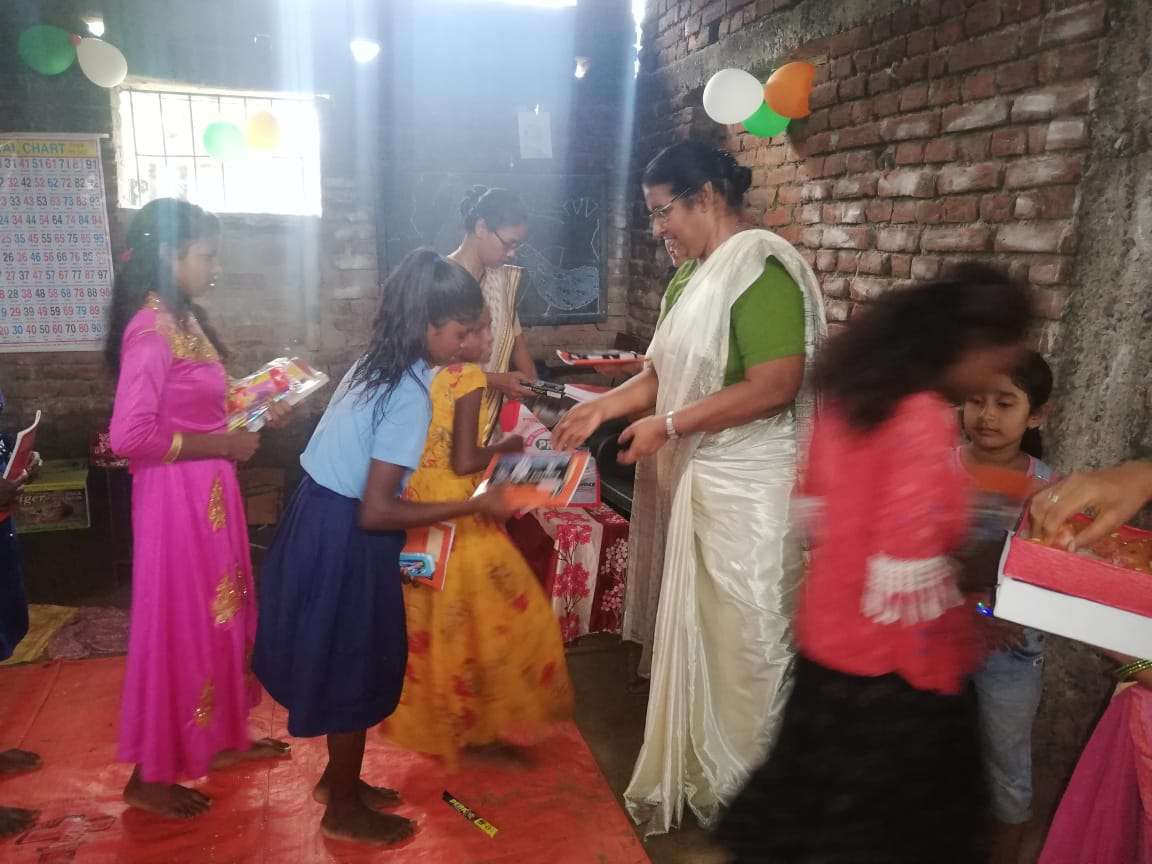 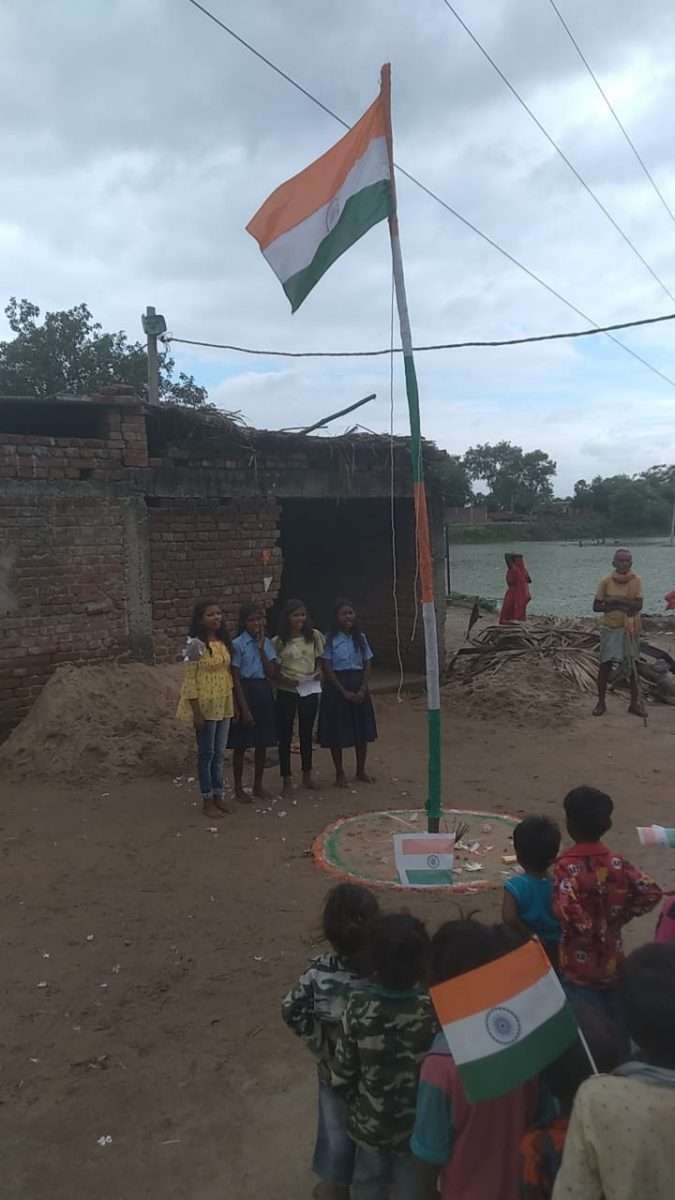 Among the cultural items presented by the children, the most unique and enlightening one was the presentation of the meaning of the 24 spokes of the national flag. They impressed the audience, as for most of them, it was a learning experience. They had a repeat performance on Aug. 15 at Nazareth Academy Hall at the invitation of Sister Sophia.

The remedial classes for children in the Mahadalit village of Kazi Chak near Bodhgaya have made great progress. The enrollment has gone above 100, and the daily attendance is very regular. At the initiative of the remedial class teacher and the village community, including children, supporters came together to put a roof over a spacious community facility. They made the floor smooth enough for children to sit and filled the empty wall space with bricks jali (open windows). Though the tin sheets for the roof came as a donation from two contractors known to Nazareth Academy, the rest of the resources were mobilized by the children and their parents. These children also had various competitions and cultural programs in honor of the Independence Day

Sale had Independence Day celebrations with a brief program. Father George Tigga, the parish priest, was the chief guest for the program. Parents of students also came for the function. They were happy to see the students’ performance. 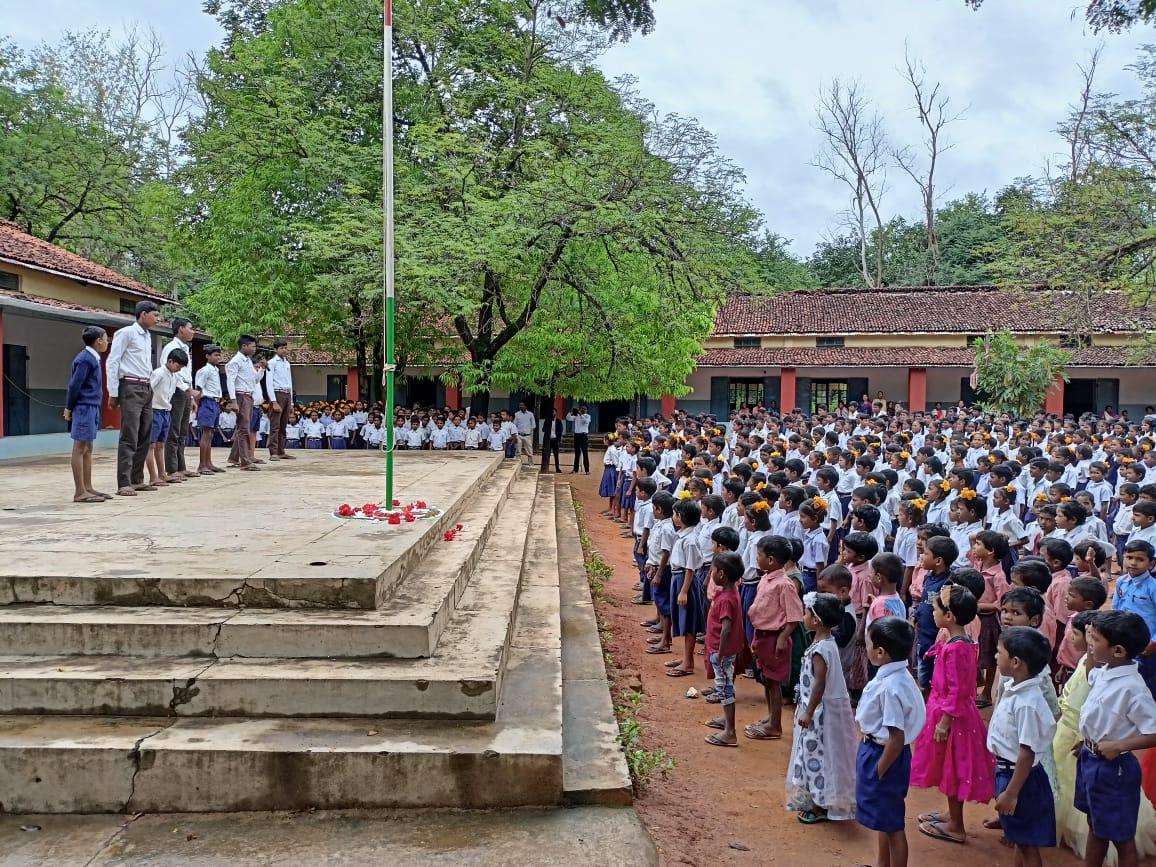 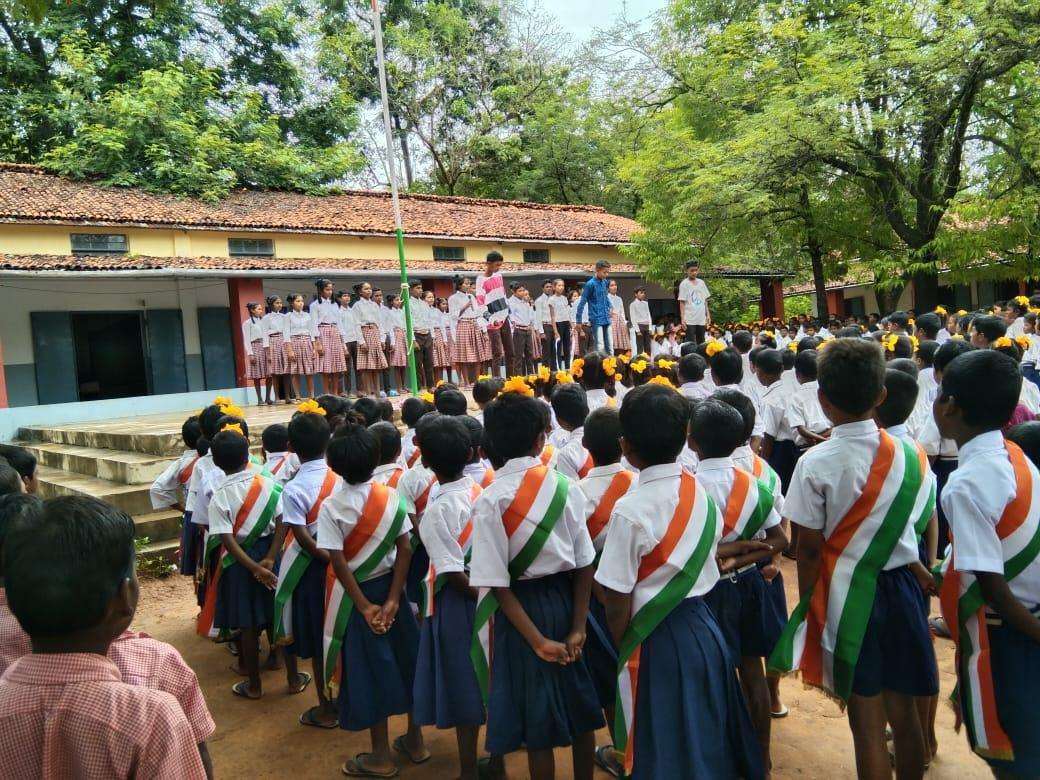 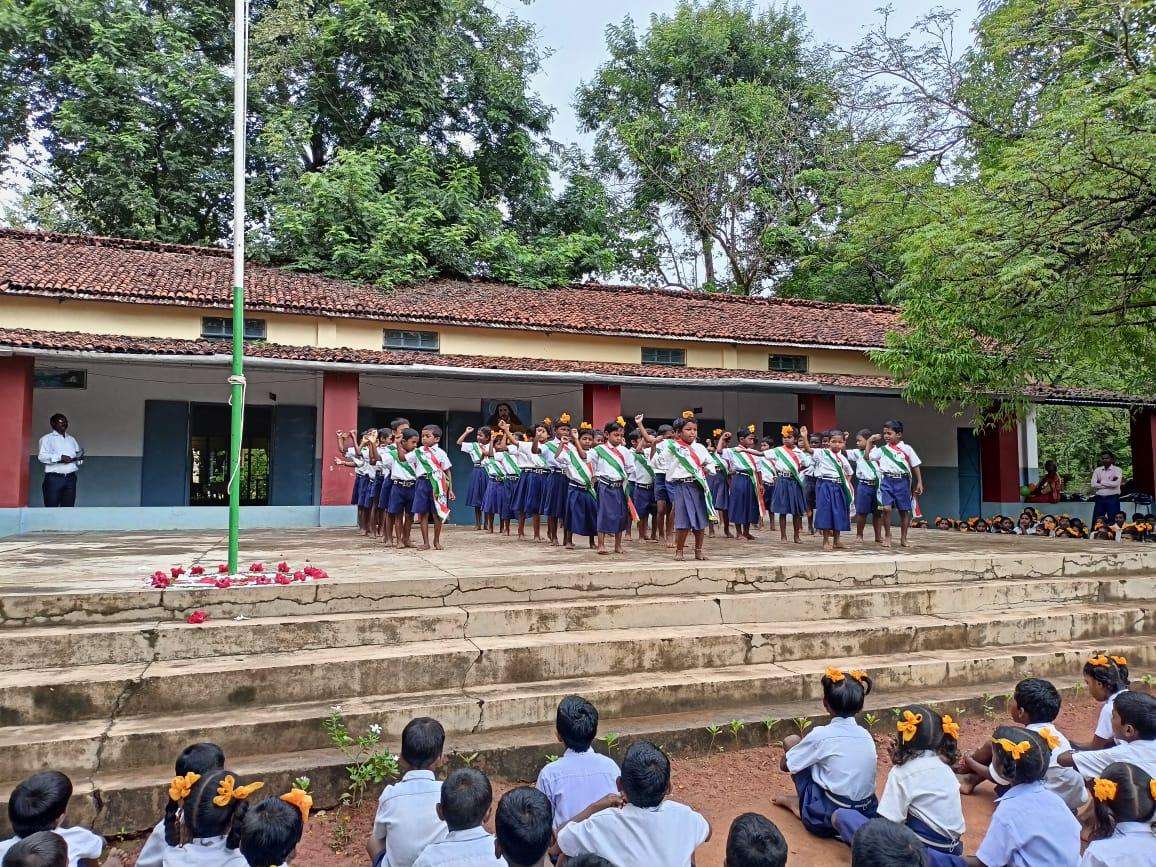 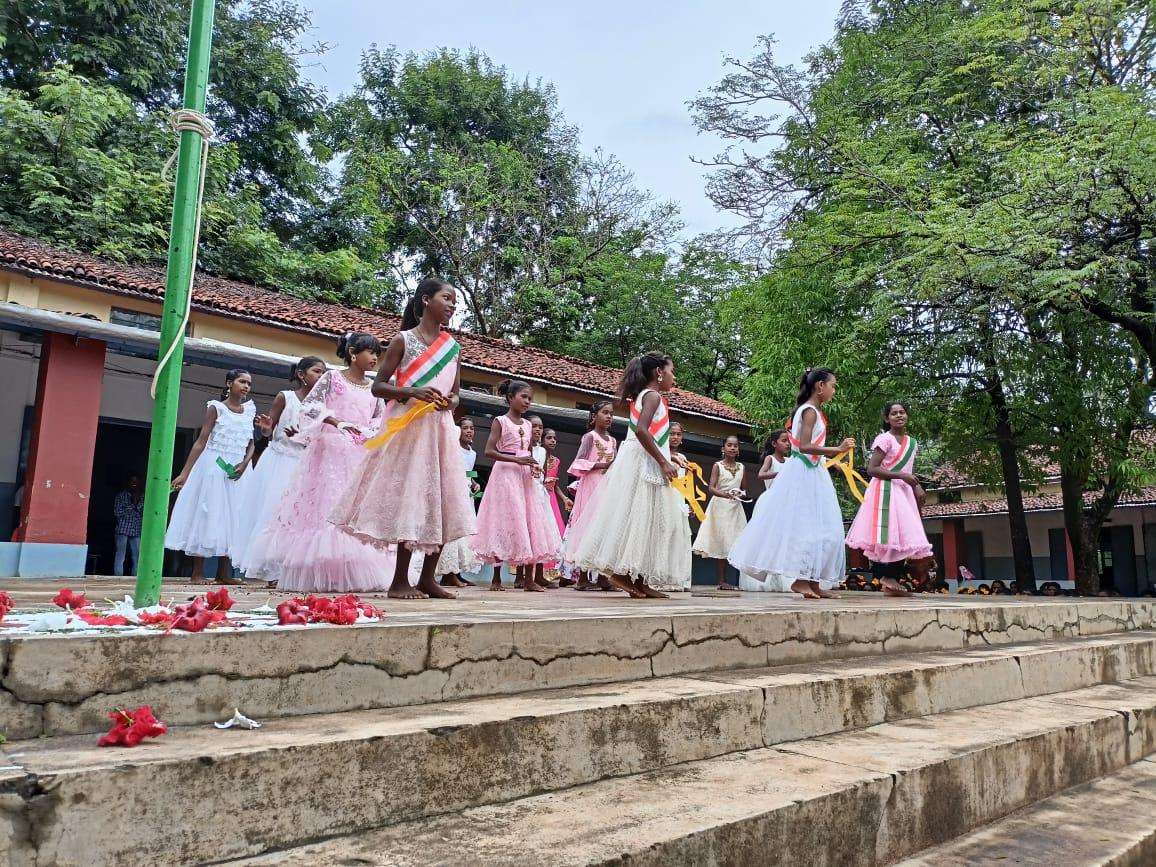 Students of Arunodaya celebrated Independence Day with a colorful program. Sister Mercy Thundathil, SCN, was the chief guest for the function. Sister Mercy hoisted the flag. Students gave a wonderful program and marched past despite the rain. By doing this, they proved their love for the country, and nothing could stop them from respecting the beloved country.

In her speech, Sister Mercy congratulated the students for their performance and encouraged them to do their best and come up in life. Sisters from SCN Provincial House and Sister Marianne Puthoor were also present for the program and were inspired by the performance of the students. Congratulations to Sisters Teresa Madassery and Rekha Kerketta for preparing the students in a short time.

Aug. 15 was the first celebration in the school with the students after two long years of lockdown. The students and teachers were very excited to celebrate the 75th Independence Day. the National Flag was hoisted on every house, institution, and school. According to the guidelines of district authorities, Gyandeep started the celebration on Aug. 11.

From LKG to Class X, students participated in different activities and competitions such as drawing, debate, speech, dance, and skit on the theme ‘Har Ghar Tiranga.’ They had three days of flag hoisting. On Aug. 13, classes 5 to 7 participated in Prabhat Pheri. At the morning assembly (instructed by the district education officer), the National Flag was hoisted by one of the parents’ representative at 9 a.m. On Aug. 14, Father Fabian hoisted the flag and enlightened all about true freedom and duties. School staff were present for this occasion and showed their love and respect for the National Flag. 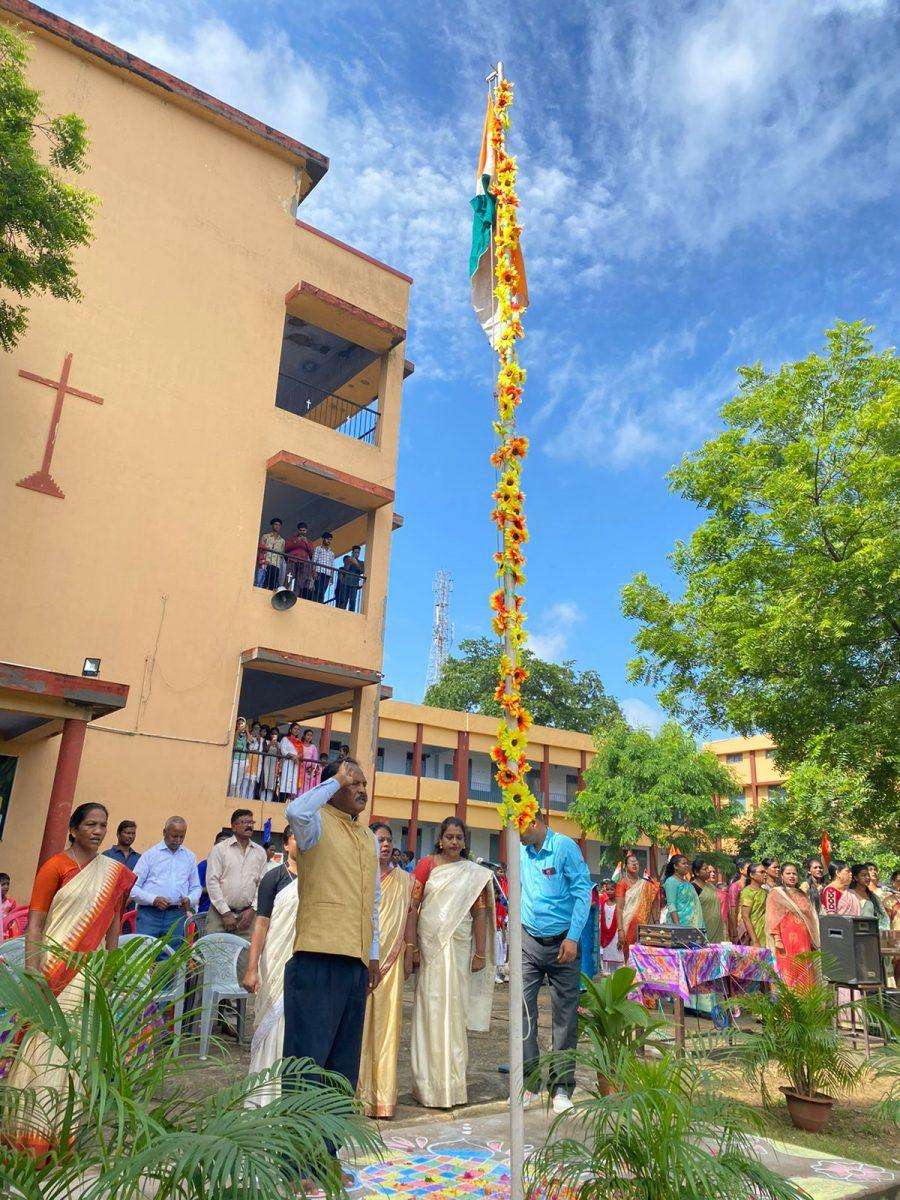 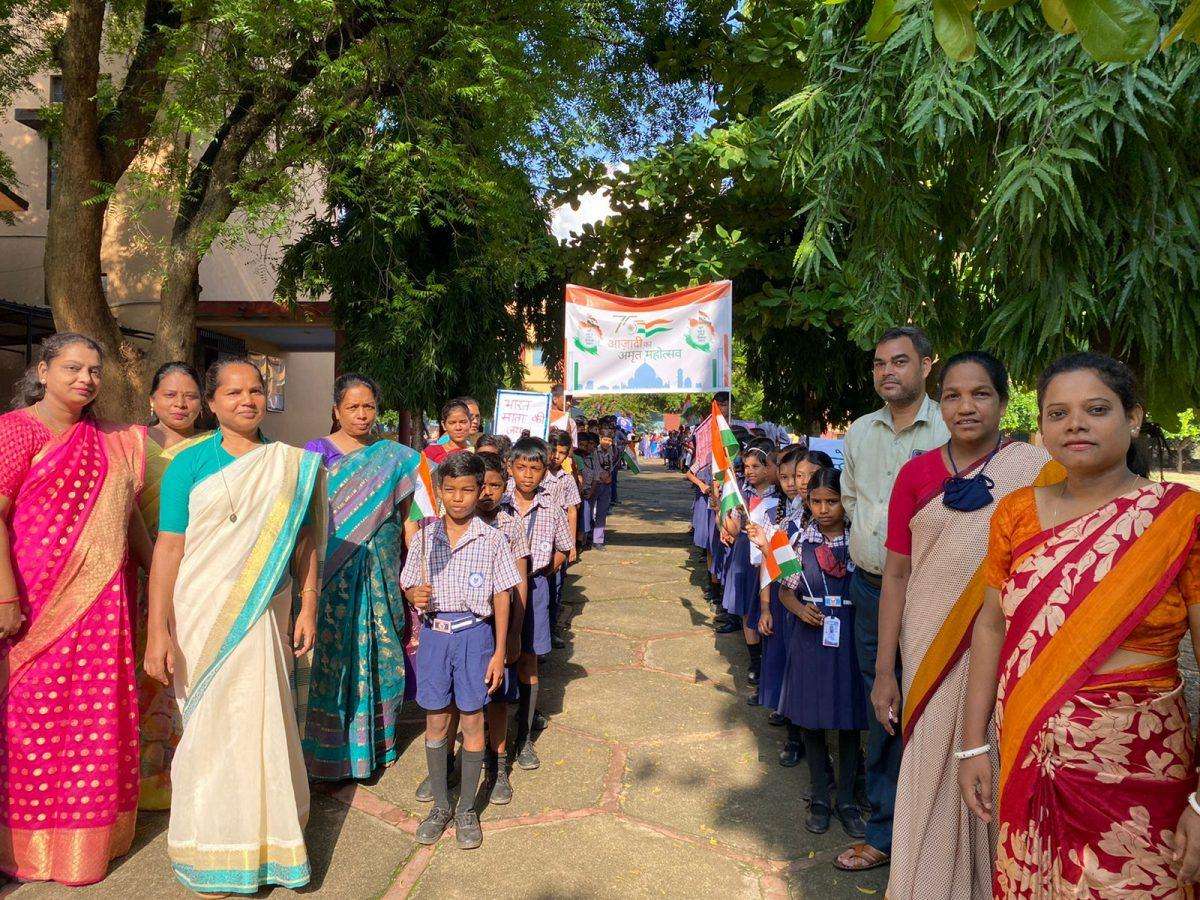 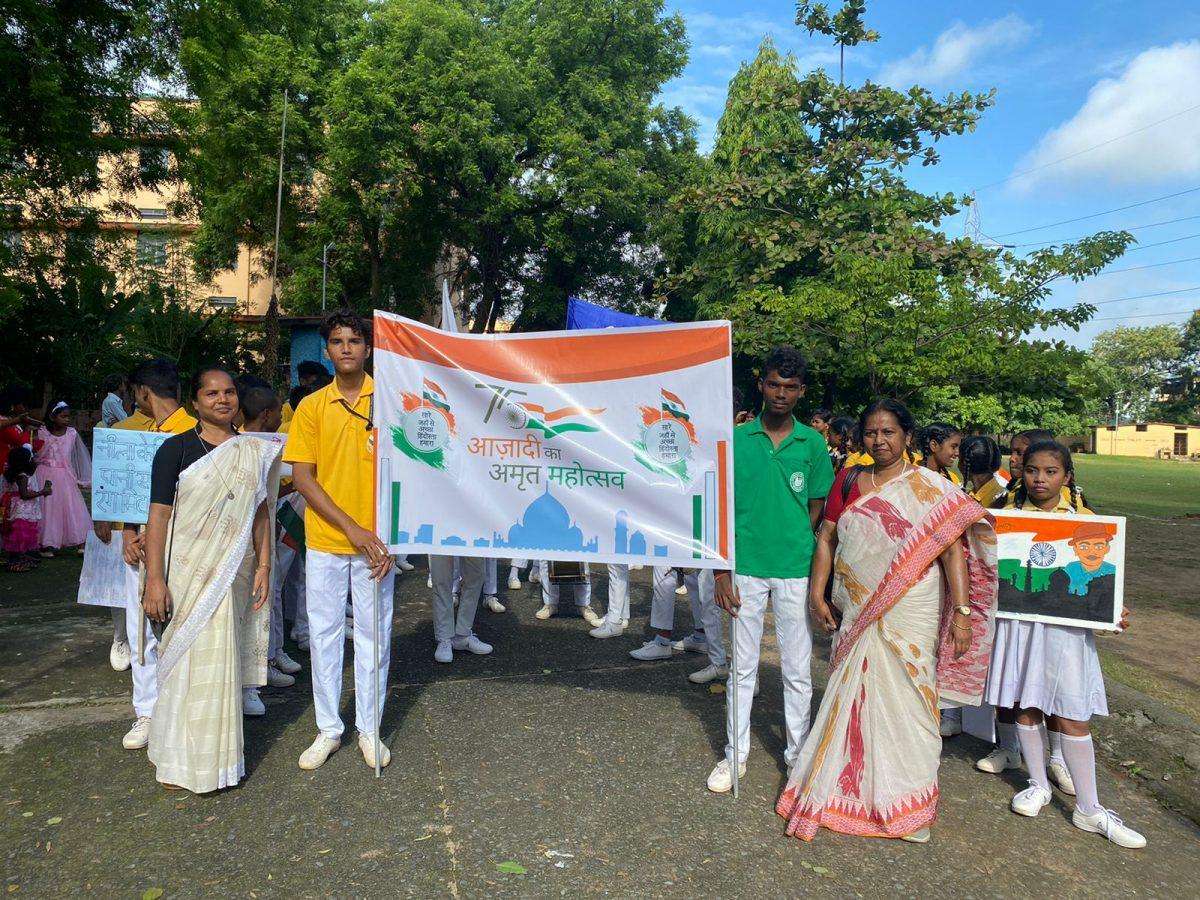 On Aug. 15, the main celebration day, they had a solemn mass in the morning. All the Catholic staff and students were present for the Eucharistic Celebration. At 8 a.m., the students of classes VIII to X went for Prabhat Pheri, and at 8:45 a.m., flag hoisting was done by Mr. Jaisingh Munda, General Secretary of Birsa Sewadal Panchayat, followed by cultural programs. The chief guest, Mr. Jaising Munda, appreciated the staff and students’ efforts and wonderful talents. He also reminded them about the hard work of early SCNs and priests. He said because of their tireless efforts, the dream that local people had come true. He assured the panchayat’s help and support for the development of the school.

Independence Day was celebrated here with joy and gratitude, remembering the freedom fighters. They had a simple celebration with flag hoisting followed by a cultural program. The tableau (jhanki) presenting “Incredible India” was very educational. It was heart-touching and inspiring for each one. Jai hind. 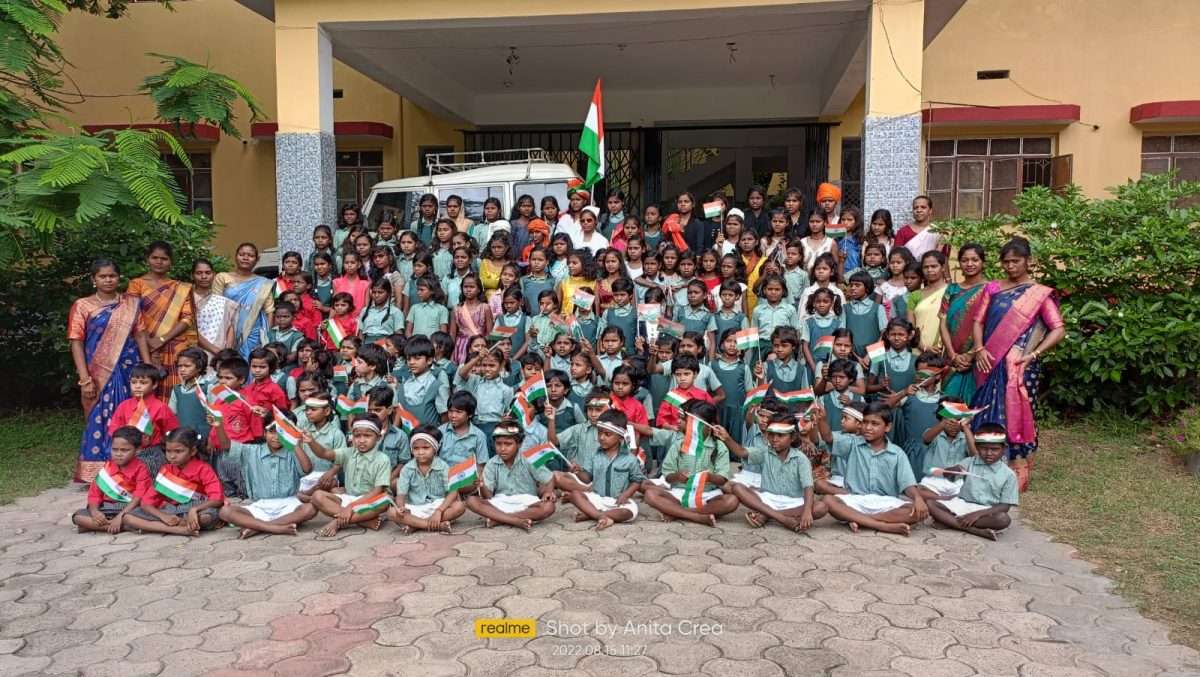 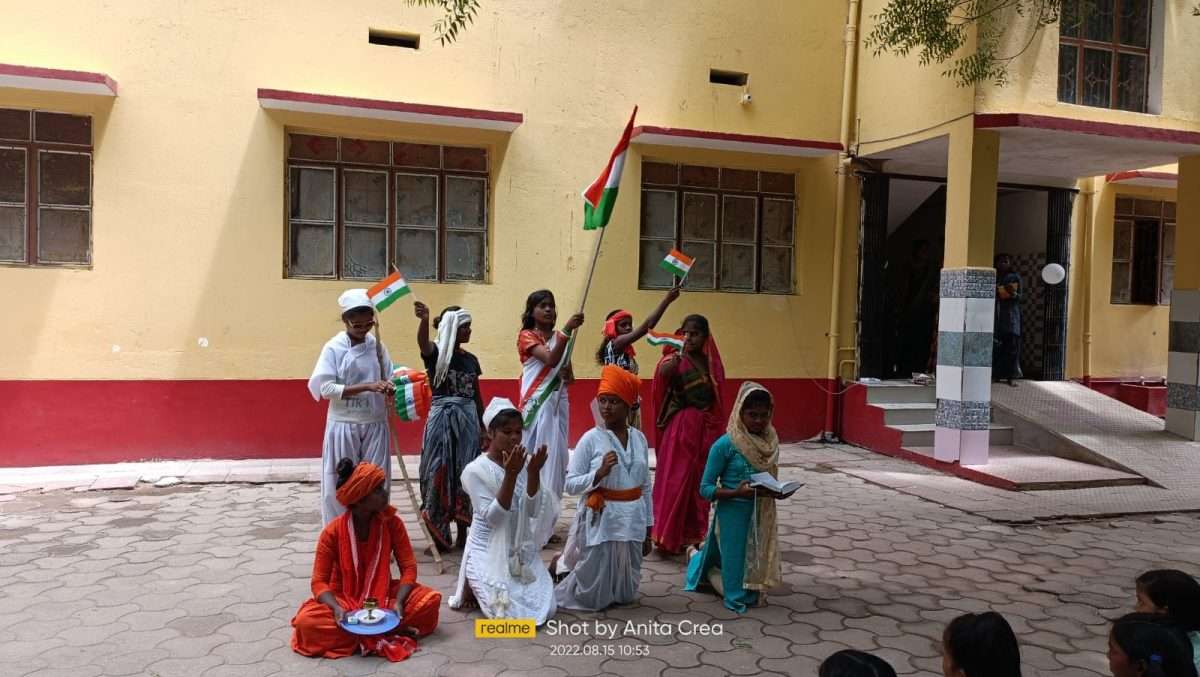 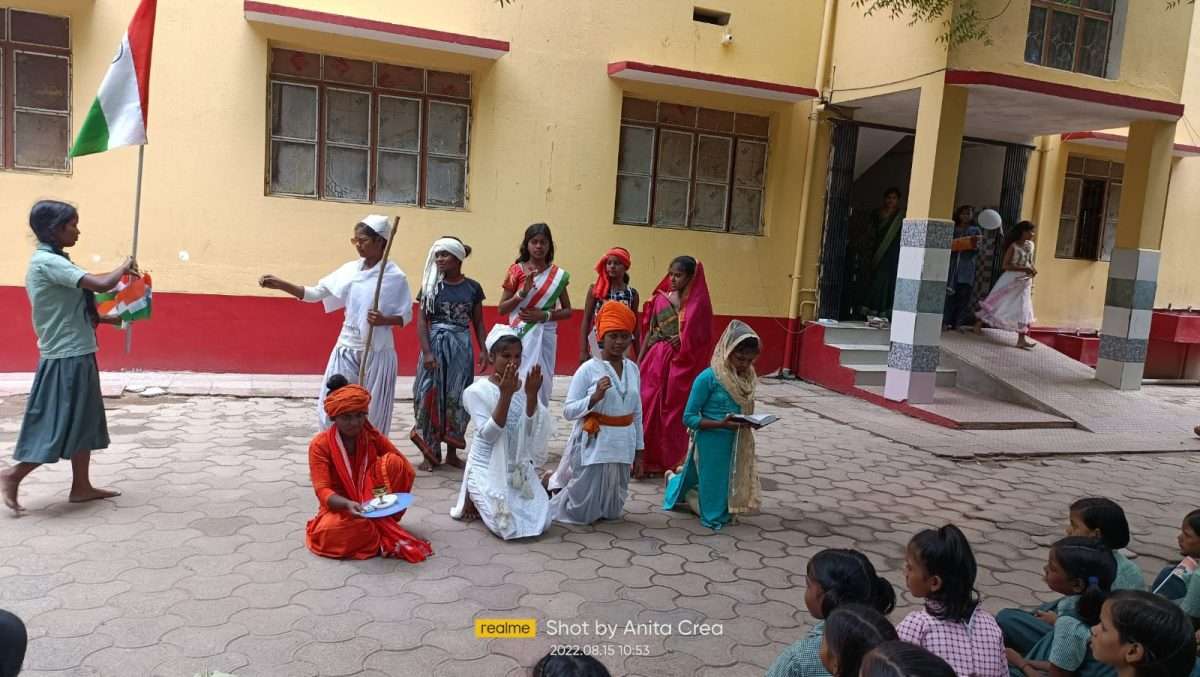 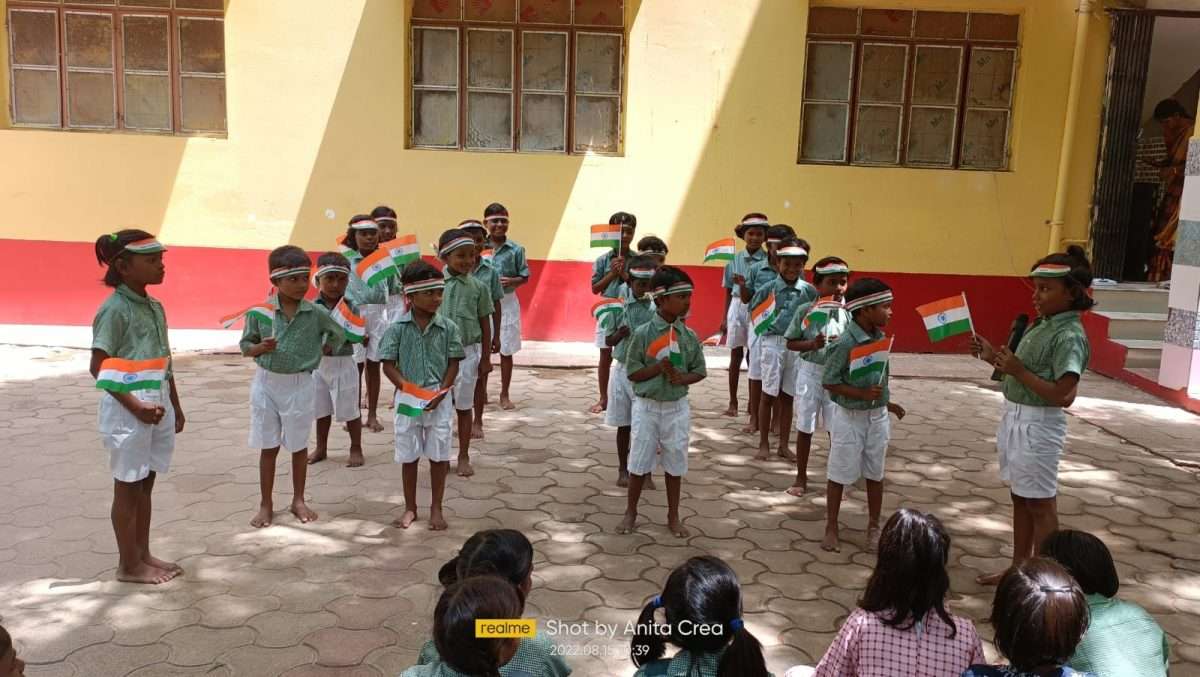 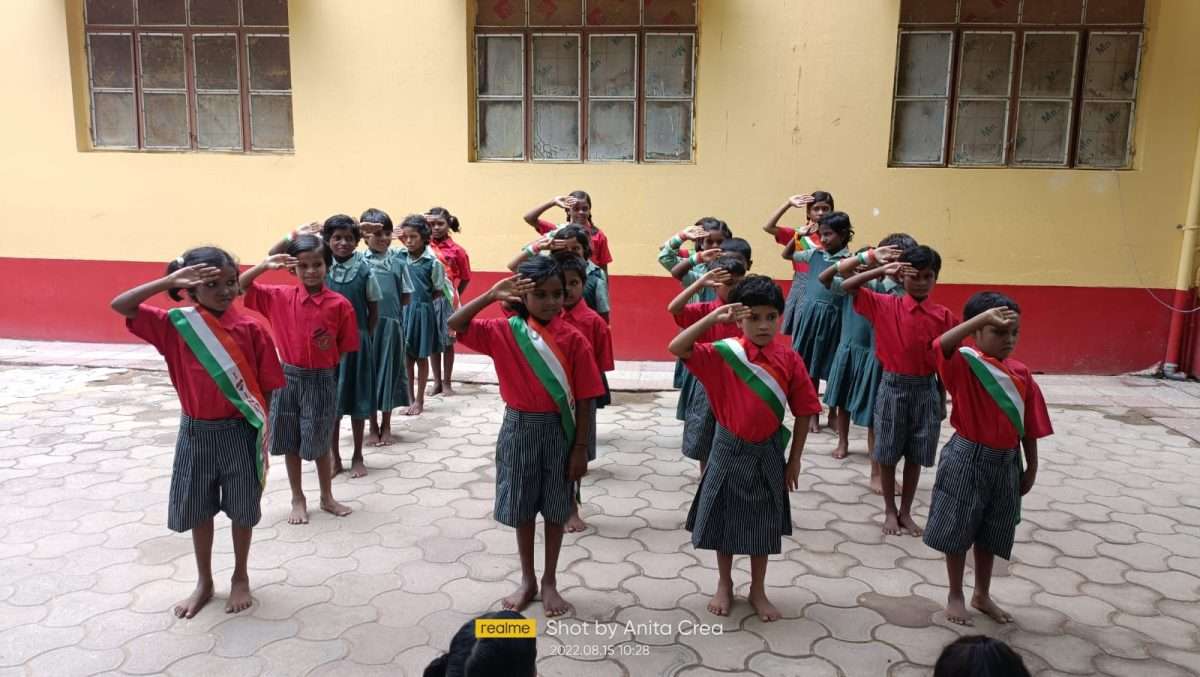 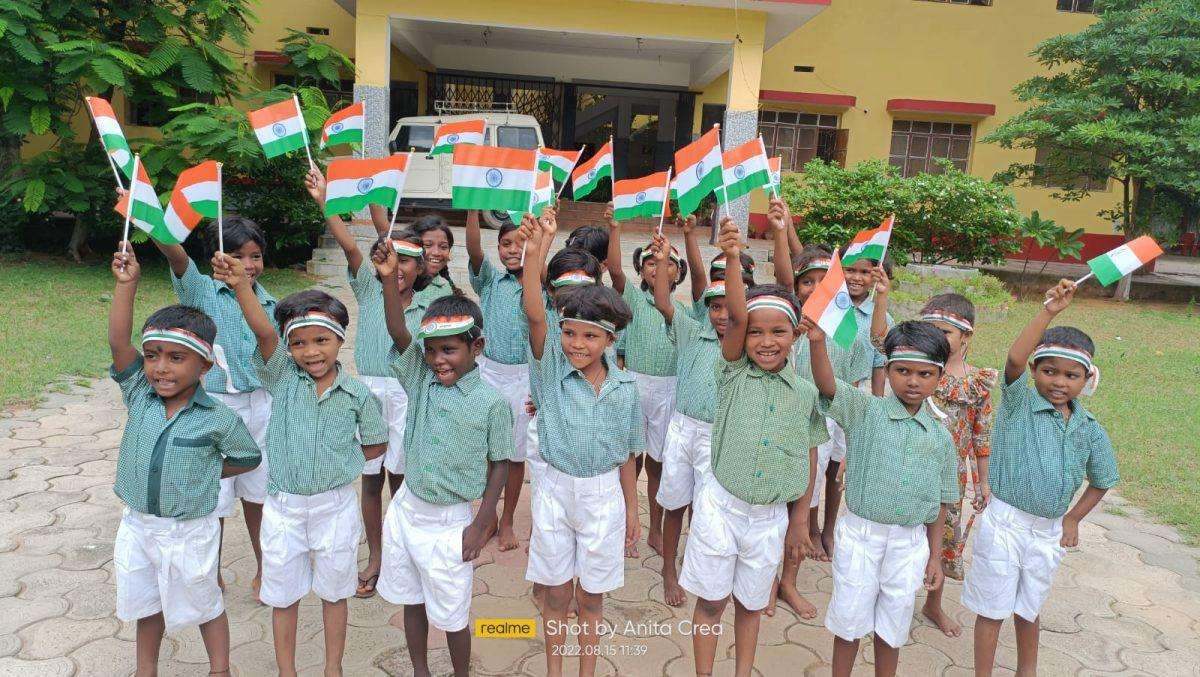