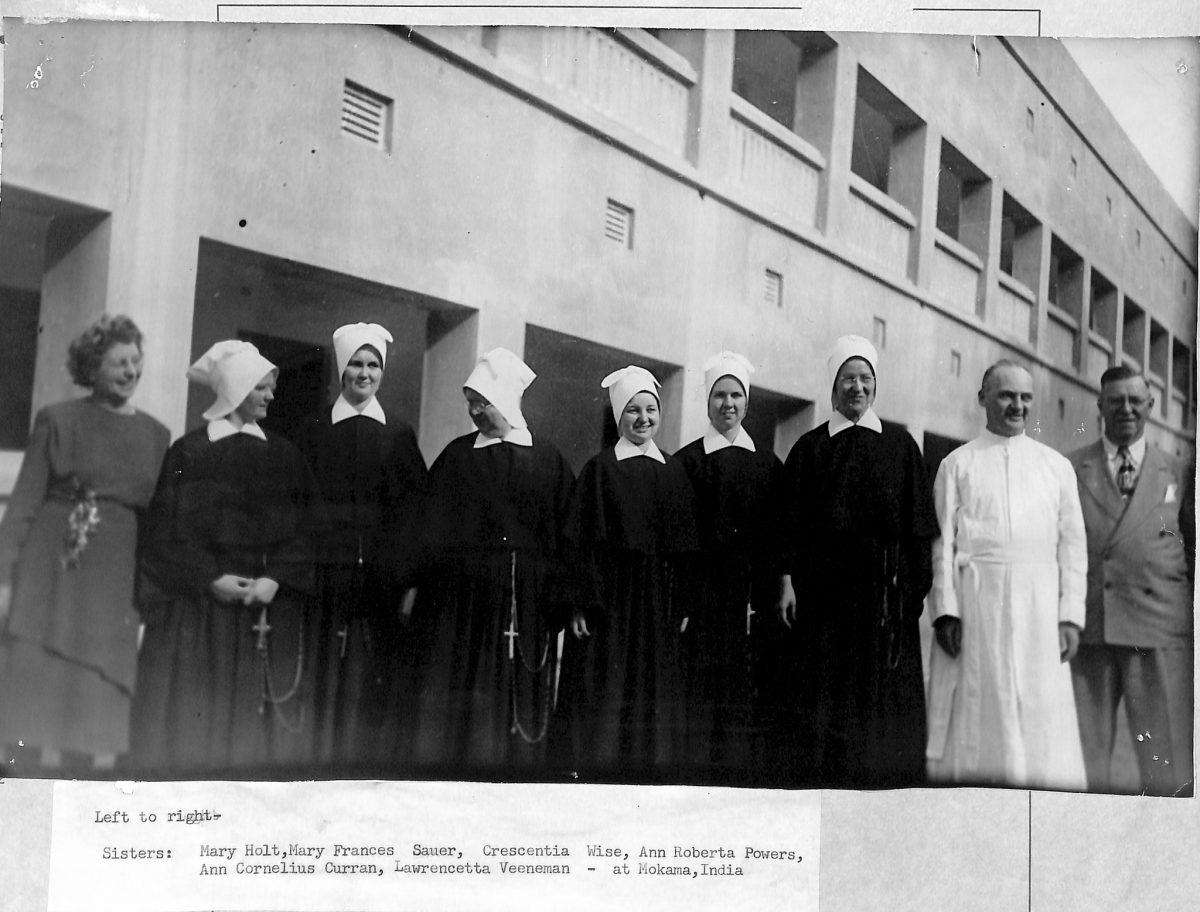 Our story continues as the Pioneer Sisters finally arrive in Mokama on Dec.13, 1947, after two months of travel.

Below is an excerpt from Sister Lawrencetta’s letter to Mother Ann Sebastian detailing their arrival in Mokama. View the full letter here. The excerpt begins early in the morning after a cold night’s train travel.

At three-thirty a knock came and the lady in the next compartment said the next stop is Mokameh. We hastily packed our things (the night had been very cold and we had gotten many things out) and began our morning prayers and meditation.

At 4:05 A.M. the train stopped and I wish you could have seen the delegation that was there to meet us. A movie of it would have been fine, but it was too dark. Father Welfle, Father Philip Poovatil, Father Stegman, Father Burke and his parents who had come from Chicago for his ordination, Mr. Murphy, a scholastic, and the forty-five boys from the school ranging from about six to fifteen; the band, consisting of two drums and two wind instruments (I will have to give you the names of them sometime later). The boys sang, the band played and there were fire works all the way from the station to the covenant at our o’clock in the morning. The boys carried all our baggage on their heads. I almost forgot to tell about the garlands of yellow marigolds that were put over our heads as we stepped off the train.

When all the baggage was off the train, Father Batson wasn’t any place around. He and Father Birney had fallen asleep and he couldn’t believe he was at Mokameh when someone woke him.

Although it was very dark and the stars were shining brightly, yet when we entered the compound, we could see by the light of the lanterns and flashlights, the nice walks, the beautiful chrysanthemums, the marigolds, etc. We passed the priests’ house and then a few minutes walk brought us to the convent and after being shown all around the building and getting off a little of the dirt, we had Mass in our chapel at five o’clock. After all the priests had offered Mass, breakfast was served in the priests’ house, where we had all our meals for the first two days.

In the evening, which seemed almost like another day, the boys gave a program in the school, which place answers for many purposes. There was a song and a welcome address in English and a hymn in Hindi. They presented us, each one, with a garland of cornflowers of purple and white which looked somewhat like a rosary, and a spiritual bouquet. This is the song – “Coming in on a wave and a prayer, Though you come from the States You have made no mistakes, You have come to Mokameh so far. What a grace! What a life! God’s new missionary Sisters, three and three With your trust in the Lord And your hearts brave and free Pray God’s grace with your work ever be.”

In the afternoon at four o’clock there was solemn Benediction given at the Shrine, after which the Blessed Sacrament was brought in solemn procession to our chapel. The rosary and hymns were recited and sung along the way – a real Corpus Christi procession. The Shrine is a good ten minutes walk from the convent, so I know it is every bit of a half mile.

The main section of the convent faces the south. I am occupying the first room on the second floor; there are three more, then the chapel, a real dream, 20 x 40 then two more bed rooms, the community room and the dining room. On the section at right angle to this, are two store rooms, the stairway and a large sun porch or veranda. On the third floor are two small rooms and a big roof garden over the long section. Work is still going on up there and the first floor, and the outside. The kitchen, store room, toilets and rooms for showers are in the shorter section, first floor. The room under my room and the two adjoining rooms were fixed up for reception and bedrooms while the Burkes were here. The day after our arrival, some people met Father and asked if school would begin next week. Some applicants have also come for the dispensary.

Click here to view another letter from Sister Lawrencetta sent from Calcutta on Dec. 9.