INDIA 75: An update from Mother Sebastian 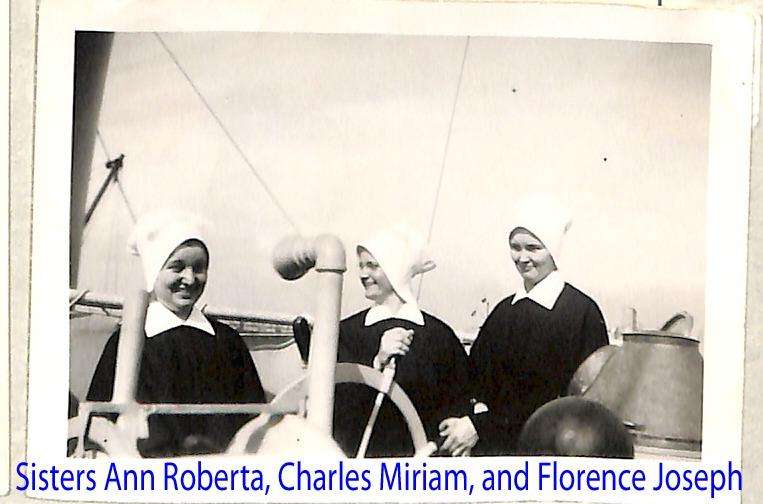 Our story continues on November 5, 1947, as Mother Ann Sebastian shares an update with the Congregation, providing more details about the journey of the six India Pioneers:

The second group for India got off from New York last Wednesday, October 29, and were just as cheerful and brave as the first three. Letters from them written at 8:30 o’clock Wednesday morning aboard the Steel Executive told us that they were expecting to pull out in another hour.

Two priests, Father John E. Holland, S.J., and Father Francis S. Wyss, C.S.C>, are making the trip, and the Sisters had two Masses in their cabin that same morning. There are twelve passengers: five for Bombay, two for Colombo, Ceylon, and five for Calcutta; the two priests and our three Sisters make up the five for Calcutta. The Burton family from Rockville, Indiana, four in all, Mr. and Mrs. Burton, Keralyn (age 2) and Linda Susan (age 1), are on their way to Bombay; also a Mr. John J. Russell from San Francisco. Mr. and Mrs. Walter Fonseka are returning to their home country, Colombo, Ceylon; Mr. Fonseka came over to the Mayo Clinic. The ship is to make the following stops en route; Beirut, Syria; Haifa, Palestine; Alexandria, Egypt; Port Said, Egypt; Suez, Egypt; Djibouti, French Somaliland; Karachi, India; Bombay, India; Colombo, Ceylon; Madras, India; Calcutta, India. The Sisters should receive your letters if you address them in care of the S.S. Steel Executive at any of these ports. It is expected that it will take the ship, traveling at seventeen knots (approximately twenty miles) an hour, seven weeks to make the trip.

Sister Mary Anastasia and I accompanied the Sisters as far as New York, and God’s special guidance every mile of the way was manifest. After the Departure Ceremony in Louisville, October 5, Sister Charles Miriam, as you most likely know, returned to Brockton to help out in the classroom and joined us in New York, Monday, October 27. Sister Florence joseph and Sister Ann Roberta left Nazareth Sunday, October 19, and spent the night at the Mount, where Sister Mary Philomena and the Sisters had a lovely farewell party for them. On Monday Sister Mary Anastasia and the two Indians joined me at La Salette (I had been making visitations in the vicinity of Covington since the first departure); Sister Mary Philomena and Sister Mary Electa accompanied them to Covington. A nice crowd was at the Tenth Street Station to see them off, including Miss Josie Quigley (Sister Francis Borgia’s sister), who was riding back to Covington in an empty car. It was soon arranged to take the two for India and SIster Mary Anastasia by auto.

Covington gave them a fitting send-off; Bishop Mulloy, however, was not there. He had promised to say Mass for them at La Salette, but was unable to do so when the date had to be pushed up in order to get the Sisters to D.C. for yellow fever shots earlier than was expected. The four of us, namely, Sister Mary Anastasia, Sister Florence Joseph, Sister Ann Roberta and I, left for Washington on the Cincinnatian on Tuesday morning, had a marvelous ride – gorgeous scenery through the mountains – and reached D.C. that night. After the shots were taken care of, there was ample time to show the two missionaries something of the capital and the vicinity, including our Maryland houses. The departure from St. Mary’s almost duplicated that from Nazareth. Most of our time was spent at Georgetown Hospital, and never shall we forget the extreme kindness of our Sisters there. Indeed, the same may be said for our Sisters everywhere.

On Monday, October 27, we left D.C. for New York, where Sister Charles Miriam joined us, and we spent the night at the Monastery of the Sisters Adorers of the Precious Blood in Brooklyn, rising at midnight for an hour of adoration, as we did when we were there for the departure of the first three Sisters. At the pier to see the Sisters off were Sisters Agnes Genevieve, Helen Gertrude, Auralia Roderick, Ann Miriam, Jean Louise, Ellen Jane, Charles Adele, and Sister Anthony (a Black Cap Sister of Charity, Sister Charles Adele’s companion). We boarded the ship at ten o’clock. Our Fordham Sisters and Sister Charles Adele had brought lovely sandwiches and coffee, and we had lunch in the Indian’s roomy cabin. Their cabin is superior to the one on the Vendor, and the Steel Executive is a larger vessel, carrying 17,000 tons; the Vendor, 12,500 tons. As we were assured that the ship would not sail until midnight or the next morning, Sister Mary Anastasia and I left the Sisters about one o’clock to make our train back to Kentucky. Much more I could tell you, but this letter is already too long. The best way in which to give you a picture of how contented our three little missionaries are is to quote from their letters:

We had supper at 6:00 p.m. … No one is aboard so far. All the passengers have gone ashore. When we are leaving the mess hall, the waiter took us to the kitchen to show us where we could get coffee at any time, and he showed us where we could get bread and meat and other ingredients for sandwiches at any time we wished them. One of the radio men came in and helped get Sister Ann Roberta’s radio working. It is doing beautifully now. A new gang has resumed the loading of the cargo. The tide is high, and the ship is way up above the dock. We walked around the deck, and it is as wet as if it were raining. The Burton family are on board but are remaining in their staterooms. Father Holland, S.J., has had callers, telegrams, and telephone calls, but he is not here. Father Daly, S.J., of the Jesuit Missions came looking for Father Holland, and in his absence Father visited us. He took four pictures of us and took your name and address to send you the Jesuit Missions if the pictures appear in the magazine…. The Sisters from Fordham left about three o’clock after many pictures were taken and after many farewells and good wishes and Godspeeds. Sister Charles Adele and Sister Anthony left shortly after you did, Mother. That takes care of everyone except the three Sisters from Massachusetts who left in time to get the four o’clock plane. Father Mariannas (spelling doubtful) came to get them, and he also came to bless the boat, which he did right in our stateroom with all of us kneeling around. He took pictures of us on the deck also …. We are getting a beautiful music program now. The Sisters are pulling out first one bag and then another, getting this, that, and something else. One of the attendants came in and show us how to pull out the bunks, so they are all ready for the night …. We are wondering how we shall do our washing and where we shall hang it to dry. We all have some to do even now …. Please thank every Sister in our Community for her kindness and thoughtfulness in our going-away preparations. All have been so kind, and the promises of prayer have been sincere. May the thoughts and prayers for us and ours for you all bind us to one another and to our dear Lord.

We are happy as can be. Very content. Thank God…. We have all the Mass things in the drawers of our dressing table. We are going to make an order of the day. There really is much to do in the way of cleaning and washing, etc …. After we finished our morning prayers, a knock came at our door. Sister Charles Miriam answered. Father Holland asked, “What time do you want mass is the next question?” Sister said, “Right now, Father, if it is all right with you.” Out Father went and brought in his vestments and kit for Mass. We fixed the altar, and at 6:55 Father Holland started Mass. We received Holy Communion at the first Mass. Father Wyss served for Father Holland, and vice versa. They were finished at 7:45 a.m.

No need to ask continued prayers; Much love to each dear Sister;