INDIA 75: A Message from the Steel Executive 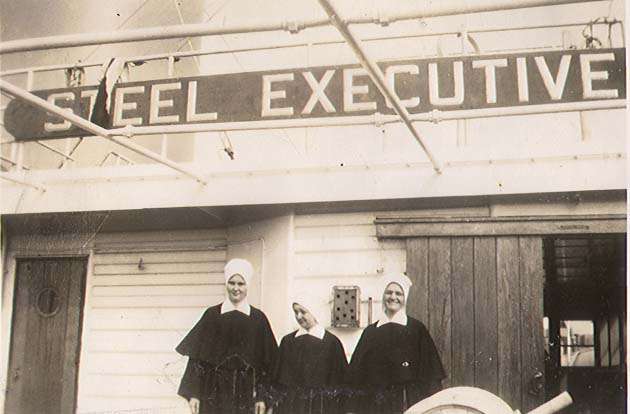 The “Steel Executive” got under way today, October 29, at 10:00 a.m., just one day late. We are heading straight across the Atlantic and our first stop is Beirut in Syria. That is what we have been told but from the looks of the map it would seem that Alexandria would be the first and we know that we have to stop there because there is cargo on the deck for that point.

Last night we spent our first night on board and the first thing Sister Florence Joseph did when she got up was to peek out the port hole. Then she turne around and announced to us that we were in the same place. I slept soundly but Sister Ann Roberta said that she was awake off and on, and every sound she heard she thought that the ship was leaving.

When the ship was being nosed out of the harbor by the tugs we stood on the deck and watched the proceedings and kept a weather eye out for the Statue of Liberty. Very soon it loomed in view and was clear enough but not extra clear. New York’s famous sky line was only barely discernible. We watched the Statue until it was lost to sight. Father Wyss, C.S.C., remarked as it disappeared, “We do not know when we will see that Lady again.” Whether we see it or not again we pray that the liberty it symbolizes be preserved and promoted to the highest degree not only in the land to which we are going – India. Very quickly the great and busy harbor of New York was far behind us. The wind was very cold and in the short time we stood outside, our caps were all but ruined. The dampness was too much for the curtains particularly. We could not go out this afternoon because it rained very hard. The ship is rolling considerably. We all went to bed after dinner. At the table we are now seated with Father Wyss, the veteran missionary of Bengal. Father Holland is seated with the Indian couple from Ceylon and Mr. Jones who is bound for Bombay. We have napkin rings provided by the waiter and our names are on them. Min is M.C. Holt; and seated next to me is F.J. Sauer, and across from me is A.R. Powers. Do you recognize my companions? At the present moment we are having a little argument. My two companions think the shop is rolling badly and I am trying to tell them that this is rather smooth sailing. But they keep insisting it is waving or rocking – very nautical terms, aren’t they?

During the day we tried to put our belongings away where they would be convenient and findable. We have spent most of our time looking for things and invariably the sought for article is in the last place we look, except my hand rosary which is definitely lost and I am quite inconsolable. I think I lost it at The Monastery. We have not yet solved our laundry problem. The prize suggestion came from our Sister Ann Roberta. In the wall above her berth, there is about fifteen feet of steel that is part of the berth construction. Sister suggested that that space be used for a dryer for our clothes. She is going to speak to the Captain about such an installation.

Nothing eventful has happened this, our first day at sea. No one bothers us and we go our own peaceful way. We have many things to talk about. Each one is telling what has happened since we last saw each other. We are still getting programs on the air. Right now some one is singing “On This Day, O Beautiful Mother.” We think it is the Sacred Heart Program. We think we are about two hundred miles out at sea. The program was from New York. How long programs will be picked up is a question.

October 30, 1947. Two Masses in our cabin. Breakfast after. An attempt to walk on the deck but it is raining, and the wind is blowing furiously but our ship is keeping a steady keel and we are quite comfortable. Sister Florence Joseph has all the medications we will possibly need in the event of sickness.

November 1, 1947 Nothing very much has happened these past three days. Sister Ann Roberta and Sister Florence Joseph have fallen by the wayside. Today they have been in bed all the time, and they were up and down yesterday. So far I have been a pretty good sailor and I hope that I will continue my record.