INDIA 75: A Message from the S.S. Steel Vendor 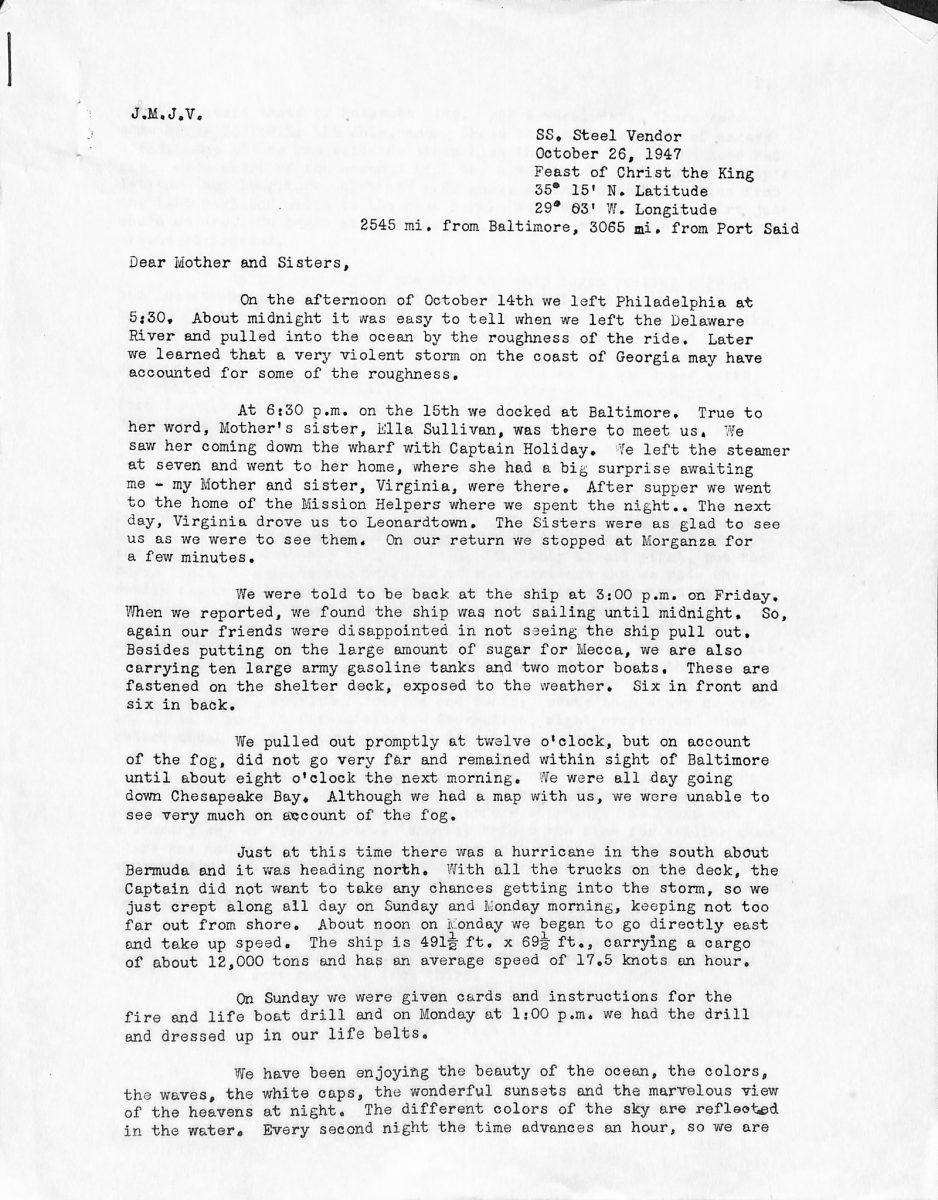 Our story continues on Oct. 26, 1947, as Sister Lawrencetta writes a letter while aboard the Steel Vendor, en route to India.

On the afternoon of October 14th we left Philadelphia at 5:30. About midnight it was easy to tell when we left the Delaware River and pulled into the ocean by the roughness of the ride. Later we learned that a very violent storm on the coast of Georgia may have accounted for some of the roughness.

At 6:30 p.m. on the 15th we docked at Baltimore. True to her word, Mother’s sister, Ella Sullivan, was there to meet us. We saw her coming down the wharf with Captain Holiday. We left the steamer at seven and went to her home, where she had a big surprise awaiting me – my Mother and sister, Virginia, were there. After supper we went to the home of the Mission Helpers where we spent the night.. The next day, Virginia drove us to Leonardtown. The Sisters were as glad to see us as we were to see them. On our return we stopped at Morganza for a few minutes.

We were told to be back at the ship at 3:00 p.m. on Friday. When we reported, we found the ship was not sailing until midnight. So, again our friends were disappointed in not seeing the ship pull out. Besides putting on the large amount of sugar for Mecca, we are also carrying ten large army gasoline tanks and two motor boats. These are fastened on the shelter deck, exposed to the weather. Six in front and six in back.

We pulled out promptly at twelve o’clock, but on account of the fog, did not go very far and remained within sight of Baltimore until about eight o’clock the next morning. We were all day going down Chesapeake Bay. Although we had a map with us, we were unable to see very much on account of the fog.

Just at this time there was a hurricane in the south about Bermuda and it was heading north. With all the trucks on the deck, the Captain did not want to take any chances getting into the storm, so we just crept along all day on Sunday and Monday morning, keeping not too far out from shore. About noon on Nonday we began to go directly east and take up speed. The ship is 491½ ft. x 69½ ft. carrying a cargo of about 12,000 tons and has an average speed of 17.5 knots an hour.

On Sunday we were given cards and instructions for the fire and life boat drill and on Monday at 1:00 p.m, we had the drill and dressed up in our life belts.

We have been enjoying the beauty of the ocean, the colors, the waves, the white caps, the wonderful sunsets and the marvelous view of the heavens at night. The different colors of the sky are reflected in the water. Every second night the time advances an hour, so we are now four hours ahead of Nazareth time. For several days, there were some birds following the ship, among these the prettiest pair of canary birds. One of the men said the storm blew them up. The second mate has given us a chart of the ocean. Each day a reading is given of the ship’s latitude and longitude, distance made good, average speed and miles from the last port and miles to the next port. We then mark on our chart just where we are. We began at latitude 36°, but most of the time have kept around 35 degrees.

On the evening of the 22nd the ship began rocking a great deal about supper time. The next morning about 3:30 there was a big bounce and dip. I had just turned on my left side when it sounded like everything in the stateroom fell. We quickly jumped out of bed and turned on the light. Outside we could hear broken glass and dishes sliding all around. Inside the ladder for getting to the upper berth had become dislocated and fallen on me, striking me in the temple. Before I could get to the basin for some cold water, a big knot had risen. Wet cloths brought it back to normal by the time the alarm for rising sounded. I thanked God all day long that it did not hit my eye. Several days before, little Benjamin, a two year old passenger on the ship, rolled down the steps. This time the steps rolled down on me. Sister Crescentia said, “Do you have a headache?” I answered, “I did, but it’s gone now.” With all our rocking we were not so seasick as some had been before. Sister Ann Cornelius has been our best traveler. When one of the officers came to the table he said, “The ship is all right, but the ocean isn’t.” This is the tail end of the hurricane and we rode the swells almost all day. This was the only day that we were not able to have Mass. The next day was calm and peaceful, and we are enjoying our ocean voyage immensely. Time is not at all heavy on our hands and we wonder where it goes. We rise at six o’clock, have Mass at seven, breakfast at seven forty-five, walk around the deck a few times, then say more prayers until about nine. From ten to eleven thirty we study Hindi, then dinner, prayers, spiritual reading and beads; rest; then study or reading until supper at five o’clock. Recreation, night prayers and then retire about eight. So you see the day passes quickly.

Oct. 28. We are wondering if our second group of Sisters began their voyage today from New York as per schedule. We hope they will not have to be a week on the way before starting. We found out yesterday why we were so slow. Shortly before the time for sailing came, there was not nearly the amount of cargo that could be carried, so word was quickly sent to Philadelphia and Baltimore shipping houses to see if they had any cargo to go our way. So that accounts for the ship’s return to those ports.

Word has been posted that we will advance our time again tonight. We will be reaching Gibraltar sometime tomorrow and we hope to be able to get some mail out from there.

We are all well and have suffered very little from seasickness. The Sisters join me in sending best wishes to all.