In memory of Jerry McCrary, SCNA 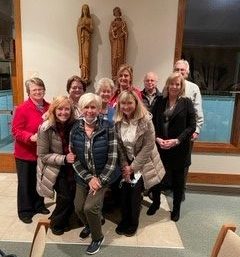 Chattanooga SCNs and Associates participated in the ending of the year of St. Joseph at Holy Spirit Church with the blessing of the statue of St. Joseph honoring Jerry McCrary, SCNA and member of the parish. The statue was purchased with donations given in memory of Jerry. The group was joined by Jerry’s sister, Tina Dean.