‘I Am Generation Equality’ 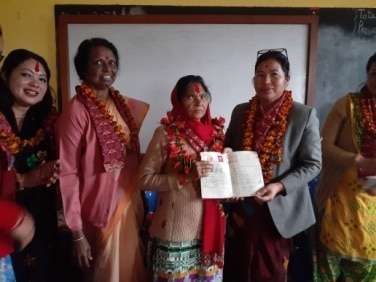 With 70 women present, some who had personally been affected by violence, the group spoke about the experience of their struggle in attaining justice, all while dealing with illiteracy or with very little education, having no financial backing, no family support, and having children who need their care.

Their flight of painful incidents made all the audience emotional. All the violence affected victims spoke that Navjyoti Center, administered by the Sisters of Charity of Nazareth, has become their maternal home, a compassionate guardian that listens to their pains and struggles. Now they are confident that they are not orphans, not helpless, there is a strong organization that will help them to obtain justice.

One of the victims, Laxmi Puri narrated her story of domestic violence. She was beaten up by her own family members and left in the forest to die after she asked for a citizenship certificate to be made. After she became conscious on the third day of abandonment she reached her neighbor’s house. They admitted her in the hospital and a case was registered but she could not follow it up without finances and a lawyer.

Through the help of the Navjyoti Center, she was able to file the case. She moved to a cowshed to live there alone, but the family set fire to it. During the process of the court case, she was able to make her citizenship certificate and claimed her share of the property which the court granted. She is happy to show the land certificate now. She received a house and her husband has been put in jail for domestic violence. Now she lives in her own house.

There were others who succeeded to get maintenance charge for their children, share of property and money as compensation. All of them blamed the government for their inactiveness, insensitivity towards the plight of the violence-affected women and their children. This sharing has opened the eyes of the municipality and province-level leaders.

The deputy speaker, in her speech, congratulated and thanked Navjyoti Center and lawyer Gita Koirala for doing what the government has failed to do for the conflict-affected women by fighting their cases, giving them material support arranging temporary shelter, and educational support for their children.

She has committed herself to try to make the participation of women at all levels of local government and to make every effort to stop violence against women. She has promised to take up the issue in Karnali Province parliament and in the province-level policies. The work of providing justice for the violence affected has not been an easy task for Navjyoti Center which has very limited funds to manage the increasing numbers of cases.

A network committee has been set up with 15 members from violence-affected women who will function as support systems for the others who are part of the Violence Affected Navjyoti Network Group which has about 60 members. Local newspapers and Bheri FM radio gave good coverage about the program.