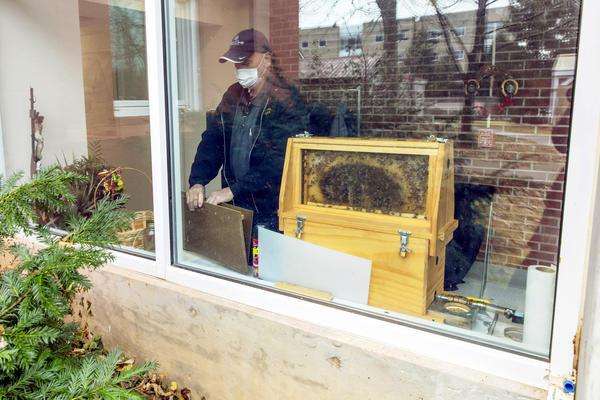 Terry Hutchins has revitalized the honeybee population on the Sisters of Charity of Nazareth campus and has started to collect honey, something that he estimated hadn’t been done in 50 years.

Hutchins said there were a few hives on location before he took them over and added more.

“They’ve had a few swarms out there before and I would catch them, but I’d take them home,” Hutchins said, who has worked at Nazareth for 30 years as a maintenance supervisor. “I had like a hollow tree, and I put them in there, but they didn’t stay. But once my brother gave me that box, that’s when I kind of really got started and going from there.” 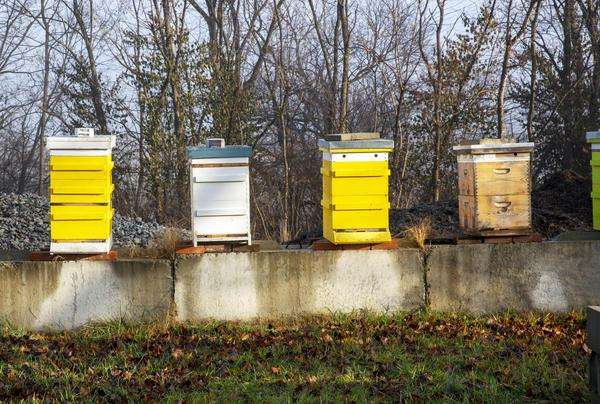 Terry Hutchins has been revitalizing the honeybee population at the Sisters of Charity of Nazareth campus. Although the honey bees are not native, they have enough habitat on campus to live and grow while the habitat also sustains many native pollinators.

Now he takes care of the hives on the grounds, while maintaining his own at home. He started collecting honey to give away and sell, to help with the costs of the hives.

It’s not a cheap hobby and it comes with its own challenges.

Between catching swarms, diseases and mites that can destroy hives, Hutchins stays busy making sure all the hives stay healthy.

Carolyn Cromer is the director of ecological sustainability and has taken lead on efforts to bring native species of plants and wildlife to Nazareth.

“I think Terry’s beekeeping is a great bridge for people to understand the importance of providing pollinator habitat,” Cromer said. 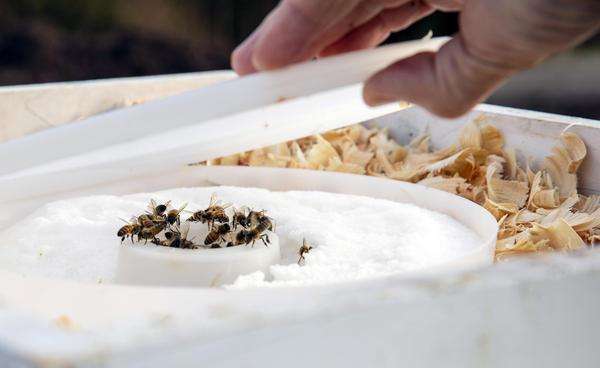 Terry Hutchins checks on the bees feeding on sugar at the top of the box hive.

The Sisters at Nazareth have had fields sown with native wildflowers and grasses to bring more natural habitat back to the native species of the area, including a variety of pollinators. One of those pollinators is the federally endangered Gray Bat, which a 2020 study conducted on the grounds shows they provide habitat for.

“The biggest effort has been our conversion of corn and soybean fields to native grasslands,” she said. She estimated that conversion to be about 25 acres on campus.

Beekeeping began at Nazareth in the late 1910s, where the Sisters tended to the hives themselves. The honey would have been used in the kitchens for serving the Sisters and students at the academy. Hutchins said one Sister told him she could remember when they would put fresh honey on ice cream.

“I think they were glad to just see them back,” he said of the Sisters.

One thing he wanted to take on was bringing a hive to the next level as an indoor observation hive.

The indoor and mobile hive allows him to bring the bees into classrooms for demonstrations. It also gives those on campus a way to view them inside and through the glass windows outside. The indoor hive is hooked to a tube that runs outside, allowing the bees to come and go freely.

When he moves the hive, all he must do is close a valve to the tube and the bees are sealed inside.

“I think the Sisters have enjoyed going down to see the demonstration hives,” Cromer said.

During educational sessions, Cromer said they also talk about the 4,000 native bee species in North America and the honeybees, which are European. And, how the habitat they are building is providing food for all of those species and more.

“When we hoard the habitat for ourselves, it doesn’t just hurt the other species that we share the planet with, it hurts us. It comes back to us because those ecosystems have to function and be healthy in order for all species within them to be healthy, including humans,” Cromer said.