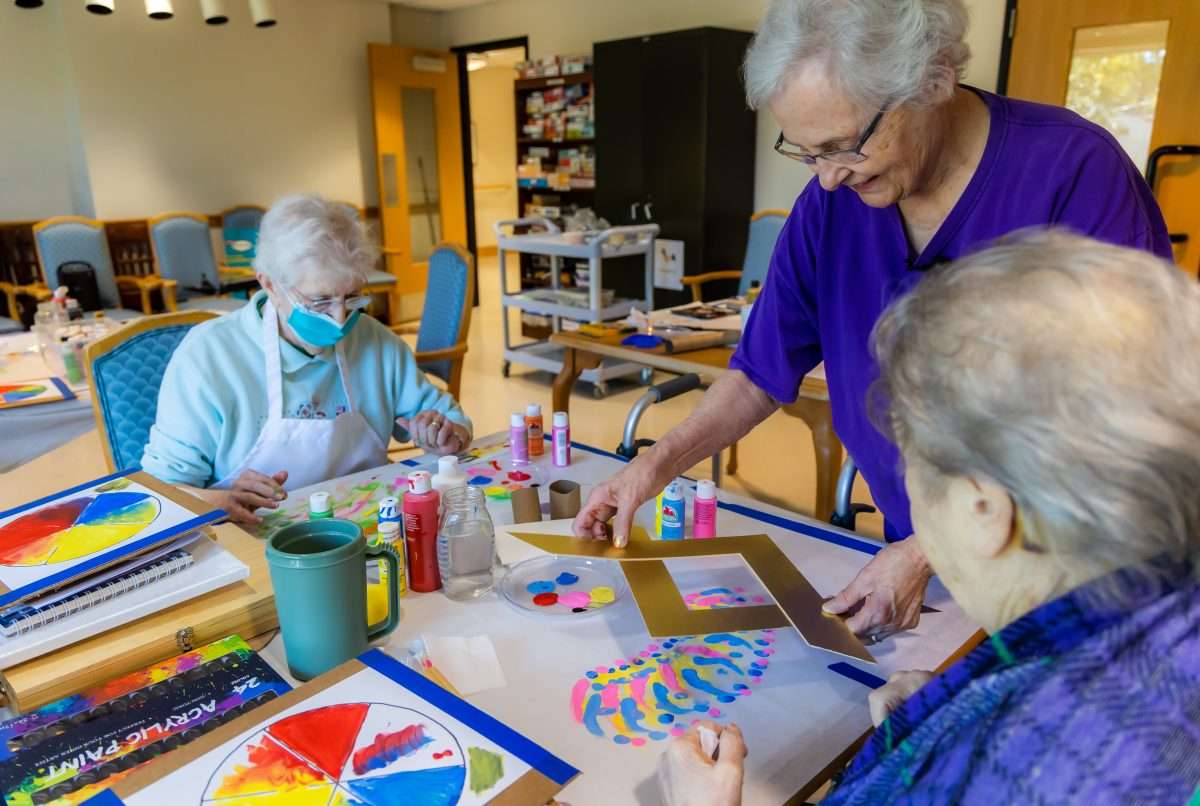 “The greatest masterpieces were once only pigments on a palette.” – Henry S. Haskins

Marie Becker, SCN, has loved art since she was a child and is well-known as a resident artist of Nazareth. Now, Sister Marie is sharing this creativity and joy with the Community for the month of October, kicking off the first of four weekly art sessions that feature a small class of Sisters. 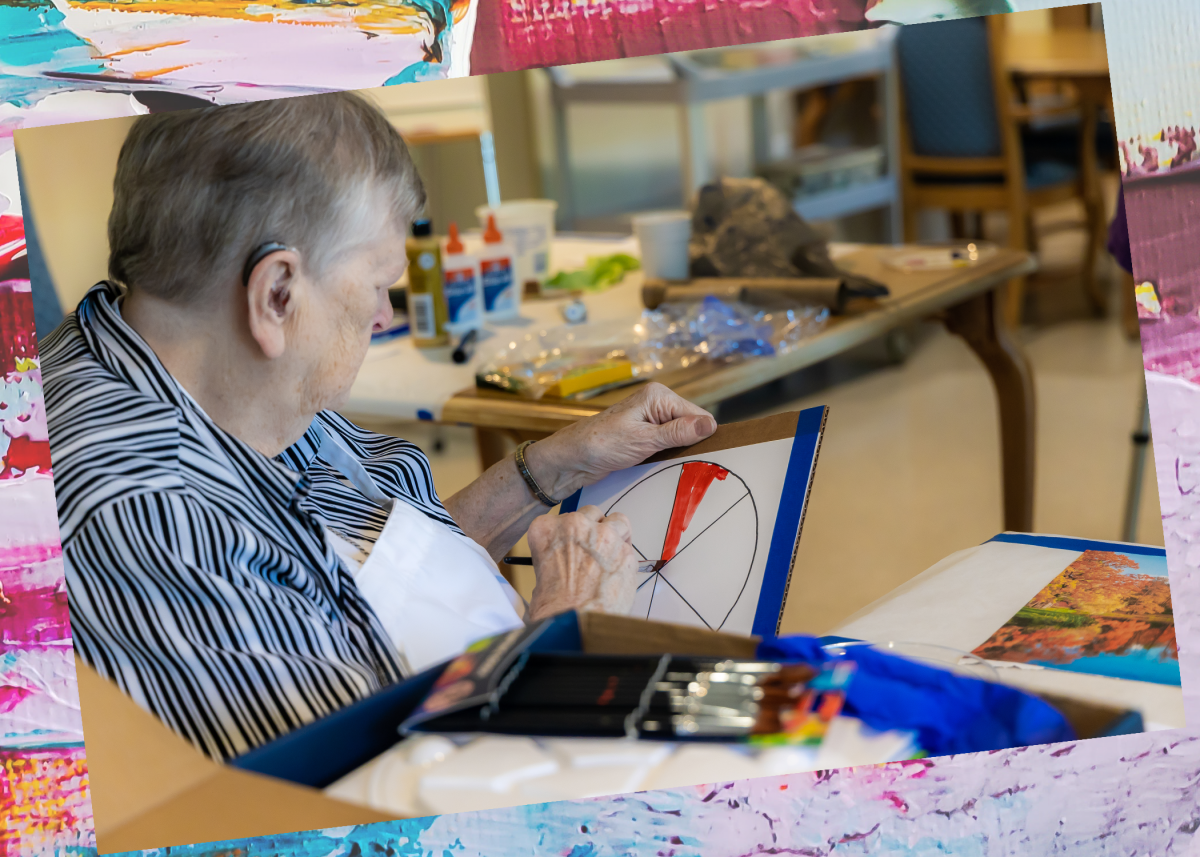 Sister Shirley Howe fills in a color wheel on the first day of art class with Sister Marie Becker.

The lessons are introductory, welcoming artists of various abilities. Some of the Sisters have never painted before, while others are more experienced. For example, Peggy Voglewede, SCN, has led her own monthly art lessons with Sisters for the last few years. She loves to make greeting cards and art from her classes can usually be found hanging in the Motherhouse dining hall. During Sister Marie’s first session on Oct. 5, Sister Peggy moved through the lesson comfortably but gathered closely to watch her fellow Sister demonstrate creative painting techniques.

The first class focused on using primary colors, basic paint mixing, and using tools such as sponges, tubes, and palette knives to create patterns and texture. Throughout the sessions, Sister Marie emphasizes her students are not there to create the “next great masterpiece” but rather to have fun and gain experience. She encourages them to experiment with colors, tools, and techniques to figure out what they like. Each student who signed up for the lessons received an acrylic art kit to use. Over the month, the Sisters will learn new skills, tips, and tricks to help them paint a piece of their own.

Sister Evelyn Fugazzi – who is taking the class alongside Sister Peggy and SCNs Shirley Howe and Rose Dobyns – is excited about the opportunity. After the initial session, she took it upon herself to research color combinations, tint, hue and shading to be better prepared for the next lesson. She also used a piece made during the first class as a binder cover for her art materials. She was beaming as she pointed out the shape of a deer she found in the abstract creation.

“I am so excited about this art. I think it will be a real enjoyment,” Sister Evelyn said, adding Sister Marie has much to offer the class.

Jenny Hicks, director of Sister Services, previously approached Sister Marie about doing the class, believing it would be a fun and beneficial experience for the resident Sisters. Sister Marie is also enjoying being able to connect creatively with her fellow Sisters. 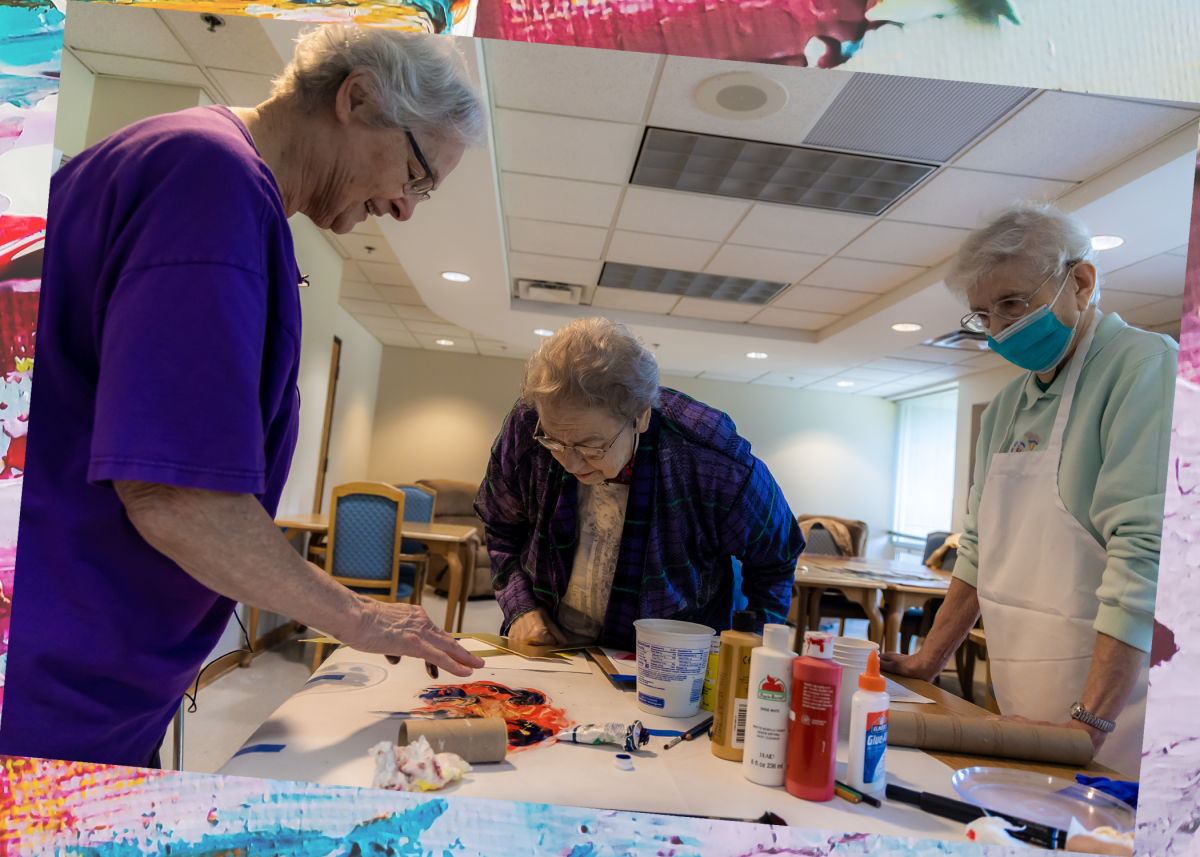 Sister Marie has been a professed Sister of Charity of Nazareth since 1971, and much of her service has been in education and the arts. Her first experience teaching art was in Paducah, Ky., in 1974, when she was hired as a science and art teacher at St. Francis de Sales School. Later, Sister Marie taught ceramics at Nazareth, and in 1995, she pursued higher education in the arts at the University of Louisville, earning in Bachelor of Fine Arts degree.

Sister Marie has showcased her work in various forms, such as designing unique Christmas cards for the Vincentian Community and creating breath-taking illustrations of the heritage and legacy of St. Vincent – which were displayed at the St. Vincent Infirmary in Arkansas. She has been a resident and self-employed artist at the Nazareth campus since 2013.

In addition to painting, Sister Marie greatly enjoys fabric surface design, quilting art, and other mixed media. She, too, is learning and experimenting alongside the Sisters in the weekly art sessions, as she is well-versed in oil painting but new to acrylics, which is what the class will use this month. 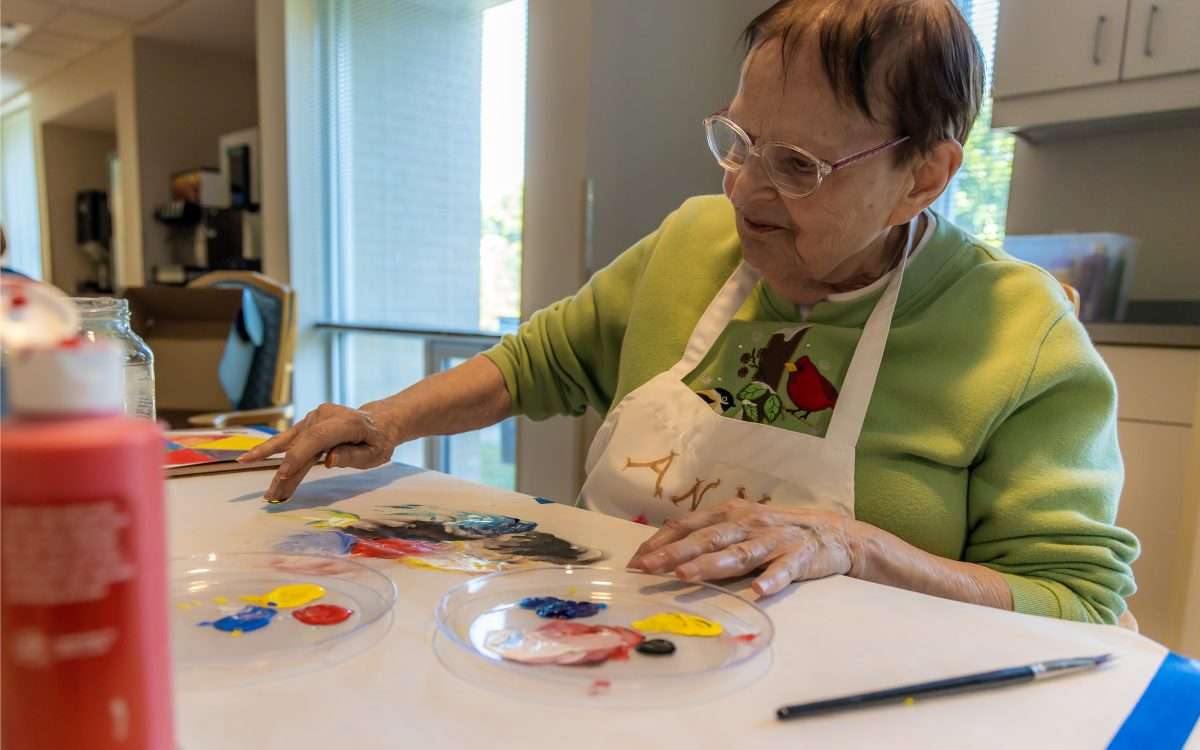 Sister Evelyn Fugazzi uses her fingers to swipe and swirl paint as Sister Marie Becker encourages students of her October art class to experiment with color and technique.