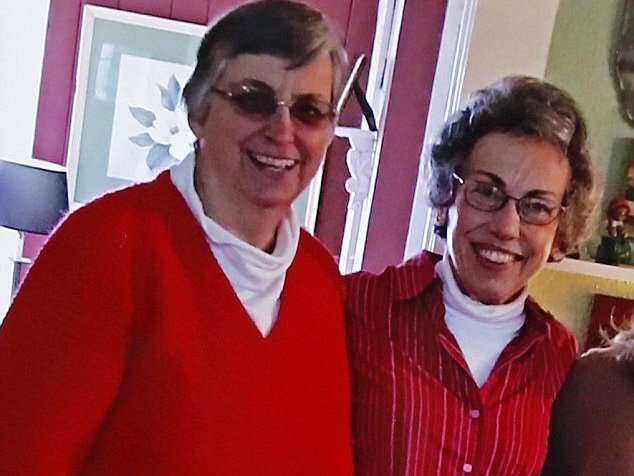 Rodney Earl Sanders of Kosciusko, Mississippi, pleaded guilty today in the deaths of Paula Merrill, SCN, and Margaret Held, SSSF, and was sentenced to life without parole. District Attorney, Akillie Malone-Oliver said the decision takes into consideration that Sisters Paula and Margaret opposed the death penalty. Sisters Susan Gatz and Sangeeta Ayithamattam, as well as Diane Curtis, Director of Communications, were present for the hearing. The families of Sisters Paula and Margaret and representatives of both Congregations made a victim impact statement at the hearing. The following is Sister Susan’s victim impact statement:

I am Sister Susan Gatz, President of the Sisters of Charity of Nazareth. Sister Paula Merrill was a treasured member of our congregation for so many years.

On August 25, 2016 we received a call from the parish priest in Lexington that brought us to our knees….Sisters Paula Merrill and Margaret Held had been found stabbed to death in their home.

Each one of us continues to grapple with the fact that these two women, who based their lives on peace, justice, and the love of God died in such a cruel and horrific way. These two women who were two of the most gentle persons you could ever know.

Paula and Margaret were so loved, and they are so missed. These two women had lived in and ministered to the people of Mississippi for nearly four decades. Their deaths have left a hole in their families, their Congregations, at the Lexington Medical Clinic, and in the larger community. Both Sisters worked as nurse practitioners at Lexington Medical Center, which served an estimated 8,000 people in the year leading up to their deaths. They saw patients who struggled to pay for medications and needed care for chronic conditions. They brought hope and healthcare to the seventh-poorest county in America. They saw the face of God in every face they encountered.

It was hard to believe at the time, and still is, that these two women, Sisters and best friends, who spent decades helping the needy in one of the poorest counties in Mississippi, experienced such violence and suffering. To this day we continue to ask ourselves about Paula and Margaret’s last hours and minutes. How and especially why? Were they afraid? Did they defend and/or comfort one another? Did they beg for mercy?

Our mission statement as Sisters of Charity calls us to risk our lives and resources as we work for justice in solidarity with oppressed people. Sisters Paula and Margaret did exactly that.

And in that spirit the families and congregations of Sisters Margaret and Paul have struggled to carry out the wishes of these two amazing women. Indeed, in spite of our own anger and hurt, we have turned to Paula and Margaret’s lives as guides as to how we approach this moment.

In the days after their deaths, we made known our reverence for life, their reverence for life, releasing a statement in which the family members and Congregations spoke out against the death penalty. It read in part,“For years now the Sisters of Charity of Nazareth and the School Sisters of St. Francis have worked to abolish the death penalty, even as we seek justice and truth. Let us hold everyone involved in prayer.”

That was one of many grace filled moments since their deaths along with the outpouring of love from around the world, the words of comfort and sadness, the bible verses that seemed to challenge and comfort us. The day after the Sisters were murdered, the Gospel reading was Matthew 25:13: ‘Keep awake, therefore, for you know neither the day nor the hour…when Christ will come for us.’

After this terrible tragedy it was a sad but comforting experience to return Sister Margaret to her Congregation’s Motherhouse and bring Sister Paula back to Kentucky, her home at Nazareth, and bury both among their Sisters who love them.

Sister Adeline gave a moving reflection at the funeral at Nazareth about Paula and Margaret’s life and death. Many passages have stayed with me. This one in particular I want you to hear, Mr. Sanders.

I quote from Sister Adeline:

“As strange as it may sound to those who did not know Paula, if Paula could meet the person who killed her, she would not focus on what the person had done to her. Her heart would be broken at what had happened to her friend Margaret, and she may even have to work at getting over her anger at the fact that her patients had lost their one life-line to a better quality of life. But as she worked through her pain and anger at the harm done to others, I believe she would look upon the one who caused all the harm and see in that face the suffering Christ as well.

I can almost hear her say with compassion, ‘What have you experienced in your life that could allow you to do what you have done to me, to my friend, and to this community? Who or what hurt you that much?’ And she would likely say, ‘How can I help you let go of some of that pain so that you can once again know yourself to be made in the image and likeness of God.’ And she would offer Christ’s forgiveness. Not forgiveness without justice….but compassionate forgiveness.

Being able to look at the one who caused such pain, and see the face of the suffering Christ in that person, is what Sisters Paula and Margaret would do.”

Mr. Sanders, we will never forget what you did to them and the suffering that has caused so many. But, because we believe in Christ and his gospel, we forgive you. We have learned over these couple of years that your life has had much turmoil and pain. We want you to know that we will pray that you can find peace.

I don’t know if you even knew Paula and Margaret. I can’t believe you did because you would not have taken them from us. I ask you to read about them, and see them in videos in which they speak firsthand…and to pray to them on your journey for forgiveness.

Not a day will go by that we will not grieve for our friends and Sisters, Paula and Margaret. I don’t think we will ever be able to understand their cruel deaths, their suffering. They continue to stand forever as examples of goodness, examples of Christ-like love, inspirations for each of us….and nothing and no one can ever take that away.