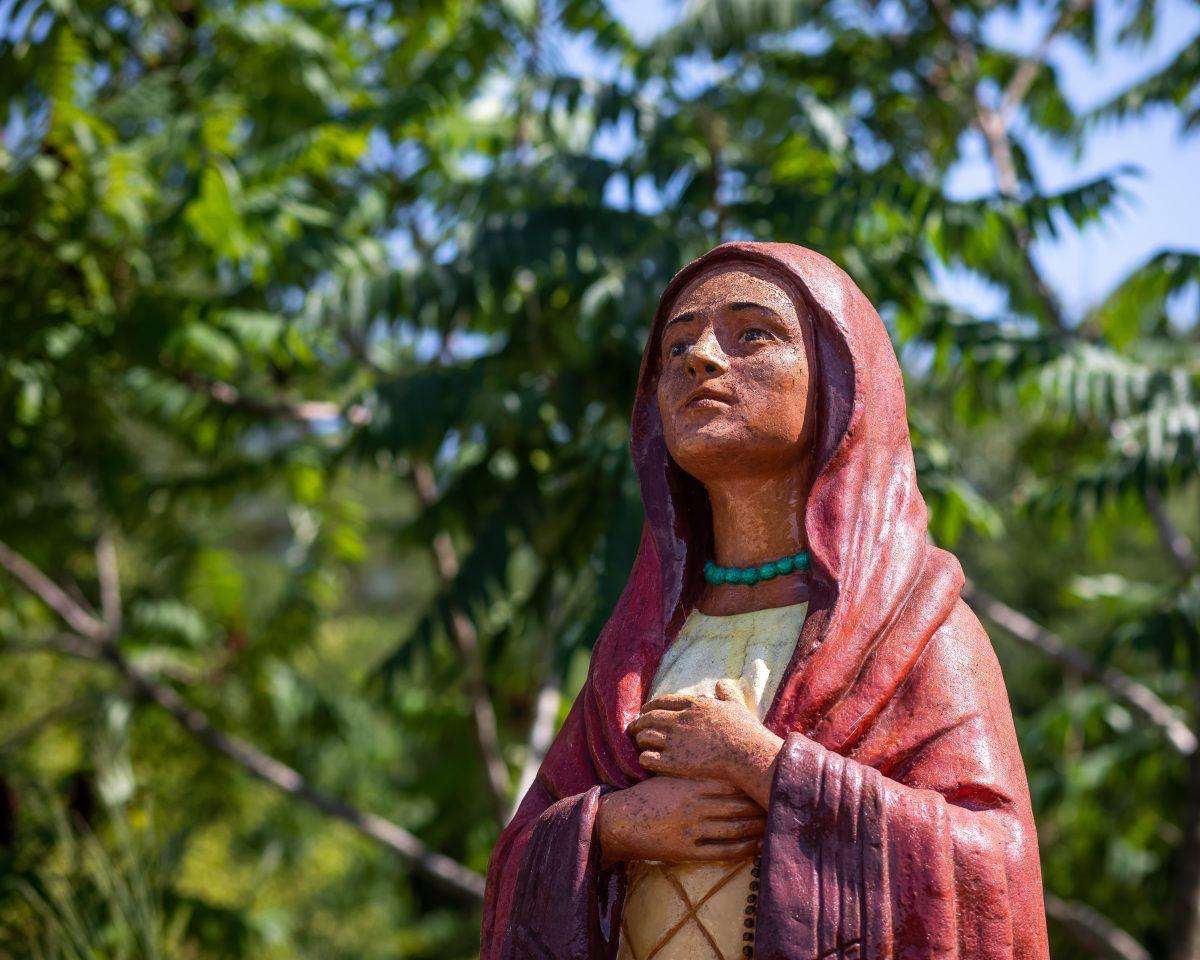 St. Kateri Tekakwitha was born in 1656 near the town of Auriesville, New York, the daughter of a Mohawk warrior. She devoted her life to prayer, penitential practices, and the care of the sick and aged in Caughnawaga near Montreal. She died in 1680 and was beatified June 22, 1980 — the first native American to be declared ” blessed.”

On July l9, l94l, a shrine was erected on the Nazareth Campus in Kentucky at the south end of the Rose Arbor in memory of Father John Dignan of Hyde Park, who had died Sept. 26, l939. He had a great devotion to Kateri. In l967, the statue was moved to a wooded area behind Russell Hall, and in 2008, the statue was moved again to its current position on a knoll on the southern side of Nazareth Drive.

Sister Carol Anne Messina, SCN, who was working with migrants in southern Texas, wanted the statue in a more prominent place than the wooded area to which it had been moved. It was at her suggestion that it was moved to its present site. 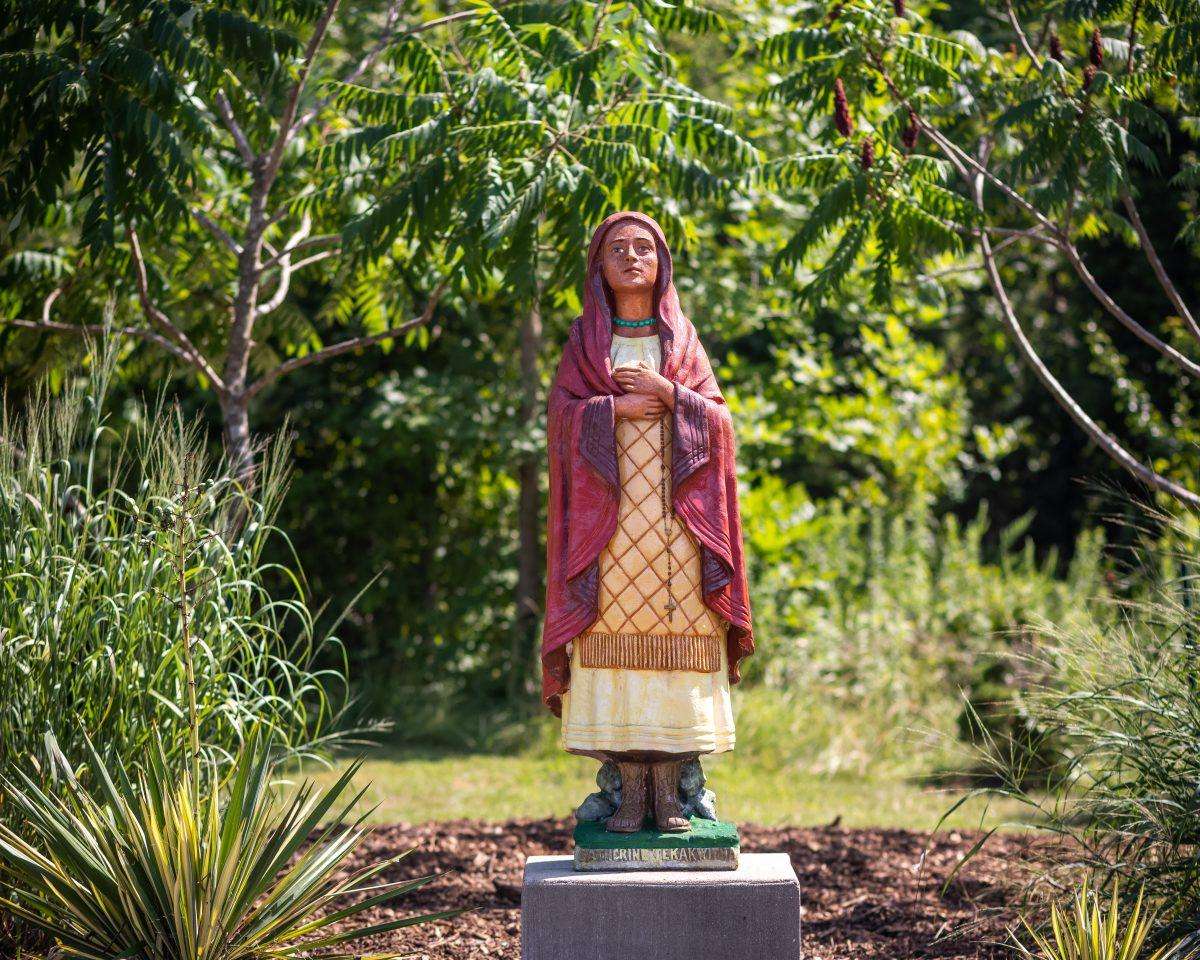 The blood of martyrs is the seed of saints. Nine years after the Jesuits Isaac Jogues and John de Brebeuf were tortured to death by Huron and Iroquois Native American nations, a baby girl was born near the place of their martyrdom, Auriesville, New York. She was to be the first person born in North America to be beatified. Her mother was a Christian Algonquin, taken captive by the Iroquois and given as wife to the chief of the Mohawk clan, the boldest and fiercest of the Five Nations. When she was 4, Kateri lost her parents and little brother in a smallpox epidemic that left her disfigured and half blind. She was adopted by an uncle, who succeeded her father as chief. He hated the coming of the Blackrobes (missionaries) but could do nothing to them because a peace treaty with the French required their presence in villages with Christian captives. She was moved by the words of three Blackrobes who lodged with her uncle, but fear of him kept her from seeking instruction. She refused to marry a Mohawk man and at 19 finally got the courage to take the step of converting. She was baptized with the name Kateri (Catherine) on Easter Sunday.

Now she would be treated as a slave. Because she would not work on Sunday, she received no food that day. Her life in grace grew rapidly. She told a missionary that she often meditated on the great dignity of being baptized. She was powerfully moved by God’s love for human beings and saw the dignity of each of her people. She was always in danger, for her conversion and holy life created great opposition. On the advice of a priest, she stole away one night and began a 200-mile walking journey to a Christian Native American village at Sault St. Louis, near Montreal.

For three years she grew in holiness under the direction of a priest and an older Iroquois woman, giving herself totally to God in long hours of prayer, in charity and in strenuous penance. At 23, she took a vow of virginity, an unprecedented act for a Native American woman, whose future depended on being married. She found a place in the woods where she could pray an hour a day and was accused of meeting a man there! Her dedication to virginity was instinctive: She did not know about religious life for women until she visited Montreal. Inspired by this, she and two friends wanted to start a community, but the local priest dissuaded her. She humbly accepted an “ordinary” life. She practiced extremely severe fasting as penance for the conversion of her nation. She died the afternoon before Holy Thursday. Witnesses said that her emaciated face changed color and became like that of a healthy child. The lines of suffering, even the pockmarks, disappeared and the touch of a smile came upon her lips. She was beatified in 1980. Excerpted from Saint of the Day, Leonard Foley, O.F.M