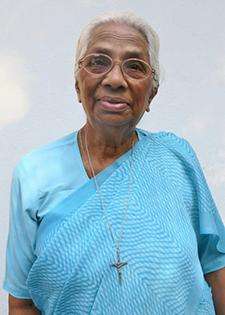 Sister Elizabeth Emmanuel Vattakunnel, fondly called Kunjamma, was born on Jan. 1, 1930, in Nagapuzha parish, Thodupuzha Taluk, in Ernakulum diocese in Kerala.She was born in a devout Catholic family and was the third of six children. She was one of our pioneers in India and was the oldest Sister of Patna Province.

After hearing about the lives of missionaries from her friends and relatives, she wanted to be a missionary. On July 4, 1955, along with 20 other girls, she boarded a train to Bihar with Father Joseph Maliparambil, not knowing which convent she was going to join. On the way, Father assigned them to go to various congregations and she was assigned to Sisters of Charity of Nazareth – Mokama.

She was sent to study pharmacy with other students. As candidates, they were full-time students, busy with their studies. Occasionally, Sister Crescentia met them and explained community life to them.

Sister Elizabeth Emmanuel made her First Vows on Dec. 8, 1959, at the shrine of ‘Our Lady of Divine Grace’ in Mokama. After First Vows, she continued to work in the hospital pharmacy. She was asked to return to take charge of the pharmacy, as well as to look after the weekly Leprosy clinic, which she continued to do till she left the hospital in 1980. For twenty-five years (1955-1980) she worked in Nazareth Hospital pharmacy, X-ray and laboratory. She made Perpetual Vows on Dec. 21, 1965 and in 1977 was able to visit the Motherhouse at Nazareth, Kentucky for three months, which she fully enjoyed.

Her hard work, commitment and love for the Leprosy patients were so evident as she took care of them. She was a very compassionate, person-oriented, loving, and caring person. Her compassionate heart reached out to the Leprosy patients who came to the portals of Nazareth Hospital every fortnight. Her frequent trips to Patna for medical supplies and the line of coolies carrying boxes in the early days remained etched in the minds of everyone. Nothing could stop her from acting on her missionary zeal or helping someone in need.

She was a very hardworking, committed and God-fearing person. For her second mission, she went to Kerwateri Ashram in Sokho in1980. In 1982, she moved to Bakhtiarpur, where she was an administrator for one and a half years before she moved back to Nazareth Hospital Mokama. From then on, she worked in the pharmacy, purchasing medicines and keeping the records, etc. She was happy that she could serve Nazareth Hospital in different capacities for 37 years.

She returned to Bakhtiarpur in October 1998 and worked as a pharmacist at the Community Health Centre. Being in a small community in Bakhtiarpur, she became close to many young Sisters who shared their personal and communal life stories with her. She considered some of them as her guardian angels, for they accompanied her to Church or wherever she needed to go. She was transferred to Mokama, Shalom, in 2019.