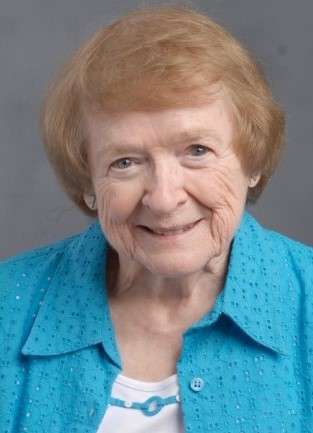 Elaine McCarron, SCN, 88, (formerly Sister Michael Maria) was born in Washington, D.C. She died on September 21, 2020, in Louisville, KY. She was a professed Sister of Charity of Nazareth for 67 years.

Sister Elaine served in educational ministries, teaching primary grades at schools in Kentucky and Virginia from 1953-1967. She was principal at St. Mary School in Richmond, VA.

From 1967-1978 Sister Elaine served the Diocese of Richmond, VA, as an educational consultant. She later served as the minister of religious education for parishes in Virginia and Maryland.

At the request of the United States Conference of Catholic Bishops, Sister Elaine assisted in preparing teachers to teach religion in Riga, Latvia as a way of developing the Church in Eastern Europe; she continued her work with the USCCB in a leadership capacity for many years in catechetics. For several summers, Sister Elaine was an adjunct professor in catechetics at the Toronto School of Theology. She also spent time in Belize to help establish and strengthen catechetical programs.

Sister Elaine served her SCN Community as a volunteer in the Archives at Nazareth from 2009-2019.

She is survived by her sisters Joan M Robinson and Maureen M Mahoney, her extended family, and by her religious community.

Sister Elaine will be buried in the Nazareth Cemetery on Thursday, October 1, 2020, at 10 a.m. The prayer ritual will be filmed and will be shared.

A Memorial Mass will be held at a later date.