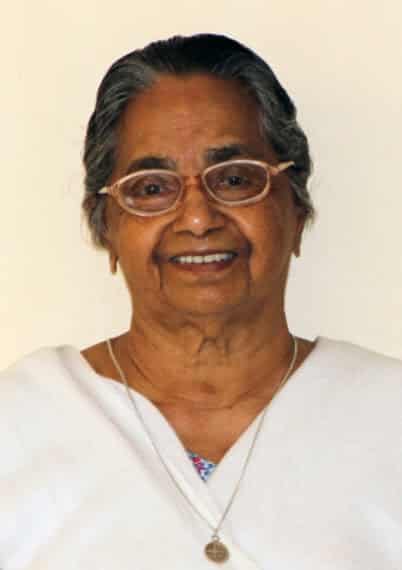 Sister Celine, and her sister Catherine, studied at the Nazareth School of Nursing in Mokama. After completing studies in general nursing in 1958, and midwifery in 1959, she served as a staff nurse in Mokama from 1959 to 1962, followed by a year in Delhi, India at Safdarjung Hospital. In 1963, she returned to Mokama as a Clinical Instructor in the hospital. In 1964, she entered religious life, made her first profession in December 1966, and perpetual vows in 1972.

Sister Celine also served the national Catholic Church in the National Biblical Catechetical and Liturgical Centre [NBCLC] in Bangalore. She ministered in an administrative capacity from 1986 to 1987, and next became the first administrator of SCN Niketan, Madiwala, the study house in Bangalore. Sister mentored and guided young SCNs, not just in their pursuit of education, but in religious life. Sister Celine was much loved for her care and concern, and how she embodied the virtues of religious life. After nine years at Madiwala, Sister Celine turned her focus towards Kakkavayal, the first SCN mission in Kerala. She helped design the present convent building, along with Teresa Kotturan, SCN. In 1998, she returned to Mokama to assist with the construction of the ministry Shalom, which provides housing and care for elderly SCNs. Along with the construction, she oversaw landscaping, which included planting numerous trees and plants. She returned to Kakkavayal in 1999 to supervise additional construction, and to Madiwala from May 2001 – 2008. She resided at Nazareth Convent at Chandapura in Bangalore from 2008 until her death.

Sister Celine was admired for her attentive nursing, hospitality, and compassion. She was meticulous and organized, and admired for time management. She was rarely idle, and could be found reading, knitting, working on puzzles, or framing them. She enjoyed communing with nature and gardened extensively, establishing and caring for both vegetable and flower gardens. Sister Celine was close to all SCN Family members – Sisters, Associates and employees. Many neighbors at SCN Niketan remember her with fond memories. Even when she was coping with dementia, she never failed to offer hospitality to those who came to the house.

The funeral Mass took place February 28, 2019, at Nazareth Convent, Chandapura with burial in the cemetery there.

Sister Celine was born on Oct. 29, 1932, in Karimannor in the state of Kerala. Her parents Mr. Mathai and Mrs. Mariam were blessed with 10 children of whom five embraced religious life. Celine was brought up in a devout Syrian Catholic family. Celine’s bother Rev. Fr. Emmanuel CST was known to many SCNs and was instrumental in directing many young women to Mokama to be Sisters or nurses.

Young Celine and her sister Catherine studied in Nazareth School of Nursing, Mokama. After completing General Nursing in the year 1958 and midwifery in 1959, she worked as a Staff Nurse in Mokama from 1959 to 1962. Moving on in life, Celine shifted to Delhi and worked in Safdarjung Hospital for a year. Mokama drew her back and she returned in1963 to continue her job as the Clinical Instructor in the hospital. It was at this time that she felt God’s call to be a Sister of Charity of Nazareth and in February 1964 she entered the novitiate. She made her first profession in December 1966 and made her perpetual vows in 1972. After her first profession, Celine pursued post B. Sc. Nursing at Christian Medical College Hospital (CMC) Vellore. Upon her return, she became the Assistant Administrator of Nazareth Hospital with Sister Mary Jude Howard, the Administrator as her mentor. In 1975 after a five-year ministry in Nazareth Hospital, Celine went to do her Masters in Business Administration from Delhi University, the first Indian SCN to study MBA. After the two year study and equipped with more administrative skills she returned to Nazareth Hospital in 1977, this time as the Administrator of Nazareth Hospital and carried with her the honor of being the first Indian administrator of Nazareth Hospital. From 1977 to 1986. It was during this period that the construction of the new hospital begun by Sister Mary Jude was completed.

It was time now, Celine to serve the national Catholic Church. She served in National Biblical Catechetical and Liturgical Centre, [NBCLC] Bangalore in the administrative capacity from 1986 to 1987. 1n 1987 she became the first administrator of SCN Niketan, Madiwala, the study house in Bangalore, where she mentored and guided young SCNs not just in their pursuit of education but in their religious life as well. Each one of them at various times has recalled the maternal care and virtues of religious life that Celine exhibited during their stay at SCN Niketan. After 9 years of ministry at Madiwala, Celine moved ahead with more creativity to Kakkavayal, the first SCN mission in Kerala and designed the present convent building along with Sister Teresa Kotturan. In 1998 she was called back to Mokama to assist with the construction work of Shalom that houses the elderly SCNs. Along with the construction, she beautified the campus by planting trees and croton plants all around it. She was once again requested to return to Kakkavayal in 1999 to supervise the construction of the building. In May 2001 she returned to Madiwala and served there until 2008. With health a cause of concern, she moved to Nazareth Convent, Chandapura thereafter for a much-needed rest.

Celine was a multi-faceted person with varied interests. Sister Celine was an excellent bedside nurse. She is known as a loving mother. Hospitality, compassion, and caring were the hallmarks of Sister Celine. She was meticulous in what she did and kept her room and surroundings always neat and tidy. She was a prolific reader. Time management was her strength. One could never find Celine idle. She was either reading, knitting, working on picture puzzles or framing them, etc. She would frame pictures and give to various homes. Such was her love, care, concern, and interest in people. She was a lover of nature and would spend a lot of time with nature. She would plant vegetables, flowers, and care for them with utmost interest. She was often found cleaning up the garden with a broom or trimming branches with a sickle. Beauty and orderliness were one of the virtues of Sister Celine.

Sister Celine was good to the employees and had personal relationships with them. She knew all the members of their family and reached out to each of them when needed. Celine was known for her swift movement. Many neighbors at SCN Niketan remember Celine with fond memories. Even when she suffered from dementia during her last days, Celine never failed to offer hospitality to anyone who came to the house. She lived an inspiring life and rests now in God who inspired her life on earth.

The SCNs bid her goodbye during the funeral mass on Feb. 28, 2019, at Nazareth Convent, Chandapura and she was laid to rest in the cemetery there.