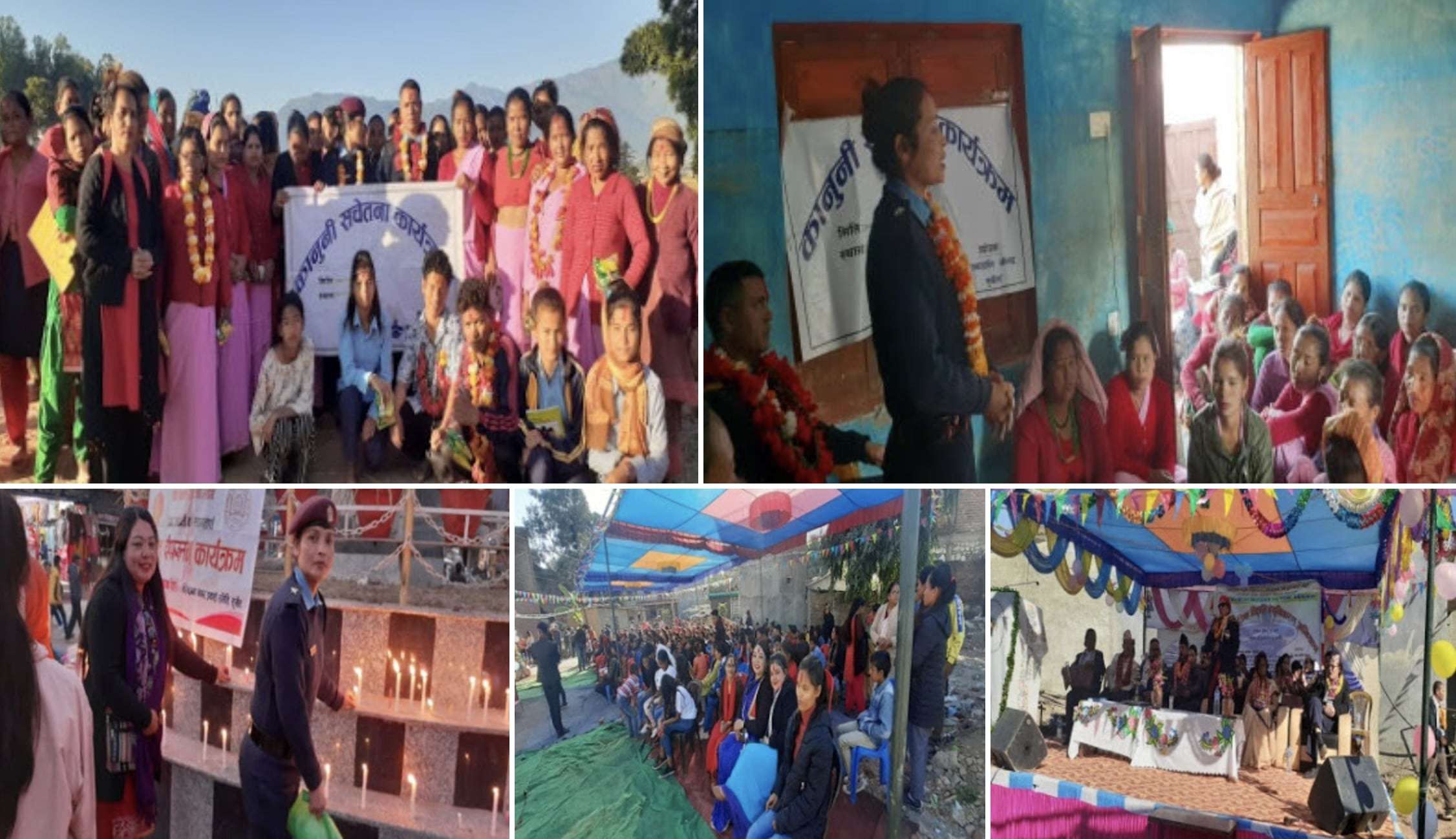 A 16-day campaign was organized in Surkhet from 25th November to 10th December with various programs. Opening day gathering was organized by Social Development Ministry with an interaction program with the parliamentarians of Karnali province, government offices, and NGO groups which ended by lighting candles in honor of those who have lost their lives in their struggle to raise their voice against the voiceless. Navjyoti organized 3 programs to mark the occasion. On December 1st Navjyoti organized one day workshop on gender violence and legal action. It was held in Guptipur village and was facilitated by Women’s Cell of District police office where 60 people including women, men and child club members participated. They voiced their grievances against the legal procedure while handling issues of gender violence. An interaction program was organized in Navjyoti Center on 6th December where Dr. Rajendra Kumar Acharya, Judge of District Court, chief of government lawyers’ office, lawyer Gita Koirala, Bishow Mani Joshi of Social Development ministry, members of judiciary committee of Birendranagar Municipality, chief of women’s cell of District police office, representatives of various NGOs were present as invited guests. 50 women who have been affected by violence, many of whose cases are pending in the district court were present. Most of them stood up and shared their painful experiences, their struggles from their tormentors as well as from concerned offices. 70 women have been helped by Navjyoti Center to fight their cases in the district court. 20 cases were settled in Navjyoti Center through mutual consent. Judge and representative of the ministry were very sensitive to the issues of the afflicted and have promised to do their level best to provide justice for the victims.

A campaign was organized on 9th in ward No. 6 to eliminate the existing Social problems in the ward. Parliamentarian Raju Guidel the chairperson of social development committee of Karnali Province was the chief guest. Others present were the chairperson of ward No. 6, chairpersons of 16 village committees, representatives from Karnali province police department, district police department, lawyers, Bishnumani Joshi of social development ministry, representatives of 15 child clubs of Navjyoti, NGO representatives and local people, a total of 350 people. Questions were raised regarding the existing problems in ward No. 6. Violence affected women and children came out with their issues of negligence from the part of concerned government departments. The representative of the Karnali province assured that policies and laws are being formulated to handle most of the issues. According to her local government and provincial government has to make various schemes to help the victims of violence and countrywide awareness-raising activities should be enforced at all levels. She specified that a program has been introduced by the chief minister by making provision to open a bank account in the name of each girl child born from July 2019 where the government will deposit Rs. 1000 at the beginning and Rs. 500 each month which can be withdrawn only after the age of 20 years. This is done as a measure to minimize child marriage and violence against women. At the end of the program, all those who were present stood up and took an oath by committing themselves to end all sorts of violence. The 16-day campaign came to an end on 10th December with an interaction program and lighting of candles at the crossroad.