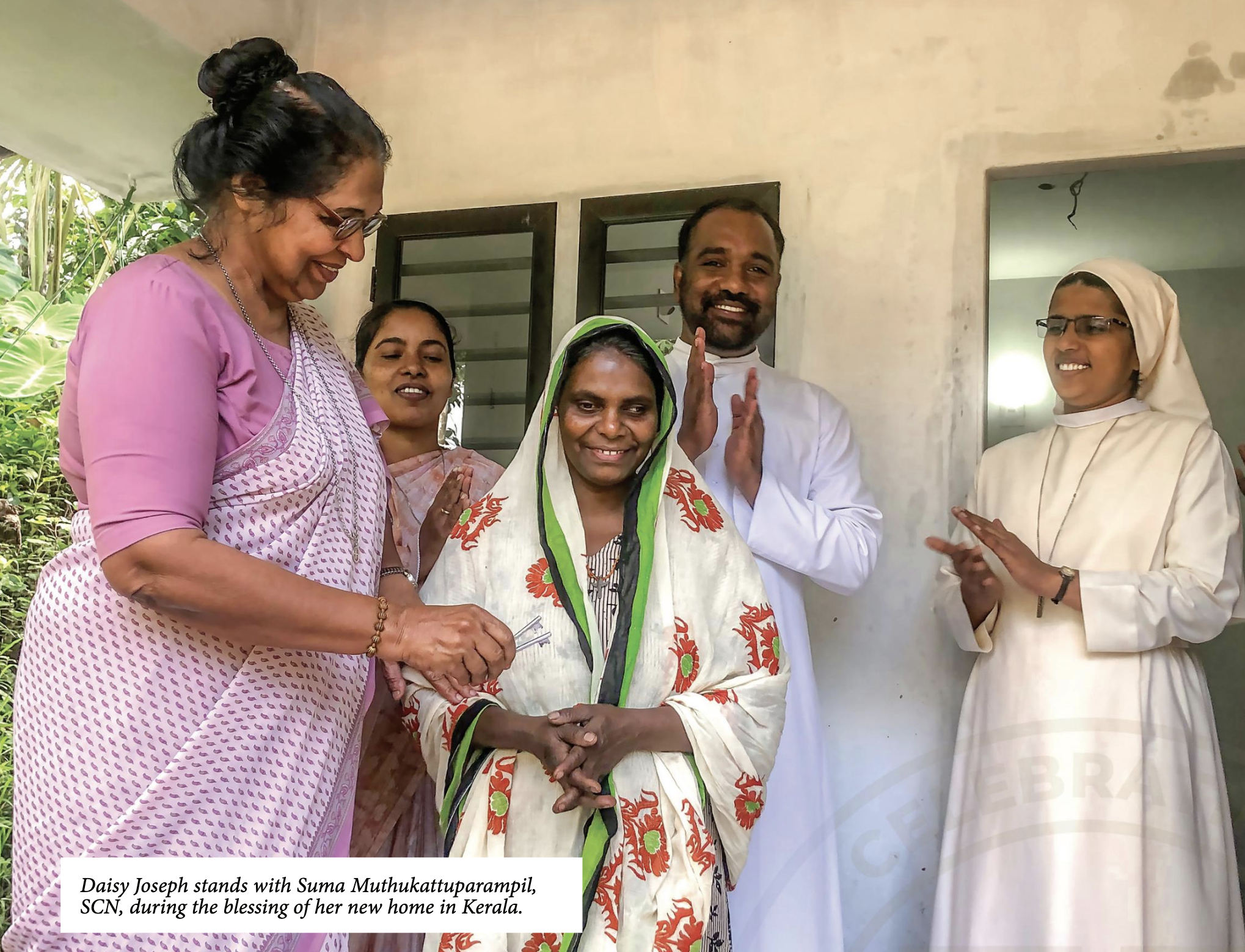 As we look at our world, we know we must continue to exist for the people for whom Jesus existed and for those he served in his day: the outcasts, the women, the sinners, and those living on the edges of society.

Translated to today, we are called to active engagement on behalf of the poor and oppressed, to advocate for education, equal opportunity, and equal rights for women and girl children, to efforts for the creation of a more just, and loving society, as well as for a deeper commitment to social and ecological justice.

The Sisters of Charity of Nazareth are celebrating 75 years of ministry in India. In marking the importance of the celebratory year, the provinces in India decided tosignificantly impact those less fortunate. Sisters agreed to build 75 homes for 75 families. They also decided to provide financial assistance to 75 girls for skills training or higher education.

Framing housing as a human right may be an important first step to implementing systemic change in our world. Sisters find it a source of joy for them to see the happiness of the deserving family members when they hear that they were able to have a house of their own. They did not have to live in fear anymore of keeping a roof over their heads and their families.

In the Patna Province

Lilly Thomas, SCN, came to know of Chandini Devi, who lives in the village of Sinduwari in Shapur. Her husband died 20 years ago, and she was left alone with three small children, two boys, and one girl. Her family reached out to her during this crisis. After the death of her husband, she went to her mother’s house and lived there.

It was a blessing that she knew tailoring. She managed to give her children a basic education with the help of her family and her little earnings from tailoring. With her little savings, she bought a small parcel of land in her name with no home on it.

Today, both of her sons are working as day laborers. The home they are living in belongs to her brother, and it needs a lot of repairs. Her brother has asked her to vacate the house, as he wants to build a home for his own family. Chandini Devi also wants to build a house on her land as soon as it would be possible. Building a house is a distant dream for Chandini, since she needs to save money for the marriage of her daughter.

They had asked for help from the Sisters of Charity of Nazareth to build a temporary house after they bought the land. The family was extremely happy and grateful when approached and told about this proposal.

The work of the house is almost over. Only some interior work is to be completed. All the members of the family worked hard to complete the house.

They are deeply grateful for the financial support they received for making their dream of a house come true.

In the Bangalore Province

Some true stories can sound almost unbelievable. One such story belongs to Daisy Joseph, a widow of Pakkam Parish in Wayanad, Kerala. Born in abject poverty, her parents sent her to various convents in and around Wayanad during her teens to work and be one of the breadwinners of the family. When she came of age, she was married to Joseph. The marriage did not bring any new twist to Daisy’s fortunes, and it only worsened after her husband deserted her a few years later.

Left with her little son (now 13 years old), Daisy found odd jobs here and there to feed themselves and to live under a roof. When the Sisters of Charity of Nazareth undertook the project of building homes for the homeless to commemorate the Jubilee of their presence in India, the Pakkam Parish team, consisting of Father Jaison Kalathiparampil, SCNs Vandana Velleringatt, Jean Kulangara, and Joicy Joy and Carla Perunilathil, FDM (Daughters of Our Lady of Mercy), felt the urge to reach out to Daisy.

Sister Carla, aware of the desperate need for Daisy to find and buy a piece of land to build her house, spent months contacting all the convents where Daisy had worked with the hope that some of her savings may have been preserved by the Sisters in those convents. Sister Carla’s untiring efforts bore fruit as she successfully gathered enough savings preserved in the name of Daisy by the nuns of the various convents where she worked.

The next challenge was to find a plot of land. This time Sister Carla had the support of the parish priest, the Father Jaison, who explored various options and finally identified property adjacent to the parish land. It also meant they had to intervene with the seller to give her an access road. The unified efforts of the Sisters of Charity of Nazareth, the parish priest, and the FDMs ensured that Daisy Joseph had a small piece of property in her name.

In the presence of a limited group of wellwishers, Daisy’s home was blessed by Father Jaison on July 13, 2022. Sister Joicy had the honor of installing the picture of the Sacred Heart of Jesus, a custom that all the traditional Catholic homes in India follow. Sister Suma handed over the key to the house to Daisy while Sister Jean joined Daisy as the oven was lit for the first time in the new house.

Daisy’s joy knew no bounds on the day she saw her newly-built home. She is truly grateful to the Sisters of Charity of Nazareth for having considered her a beneficiary of this project. Owning a home was not a dream she had ever entertained in the past. It has come to be thanks to the Sisters of Charity of Nazareth and the team of clergy and religious in Pakkam Parish of Wayanad.

Today, Daisy owns her own home.