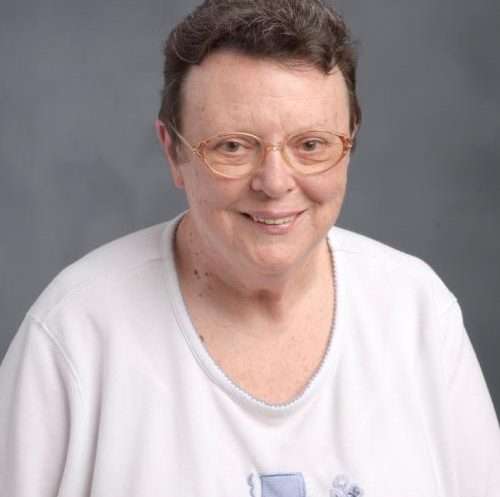 In grade school and at Presentation Academy, Brenda was taught by the Sisters of Charity of Nazareth and felt called to become an SCN. On Sept. 8, 1965, she entered the novitiate at Nazareth, Ky. However, she experienced severe homesickness and withdrew. For the next 16 years, Brenda worked while earning a master’s degree in education from Spalding College in Louisville. She taught third, fourth, and fifth grades at Saints Simon & Jude in Louisville with the Dominican Sisters for 14 years.

Over the years, she kept in touch with the Sisters of Charity of Nazareth and felt she still had a vocation. After attending a hospitality weekend at Nazareth, Brenda began plans to re-enter the Congregation and did so in June 1982, making final vows in 1985.

For her first ministry as an SCN, Sister Brenda returned to Saints Simon and Jude to teach fourth grade.

Sister Brenda also served in health care. She earned her bachelor’s degree in nursing from the University of Arkansas at Little Rock. Sister Brenda was a nurse assistant and later a registered nurse at the St. Vincent Infirmary Medical Center in Little Rock.

She assisted her SCN Community in many ways. Early in her vocation, she operated the Motherhouse switchboard. Years later, she used her health care education to provide nursing care to the Sisters living in the Motherhouse at Nazareth. She served as a driver for the Sisters for 16 years. Sister Brenda was a staff assistant at the Catherine Spalding Retreat Center from 1995-1999.

Sister Brenda was also involved with the National Multiple Sclerosis Society. She participated in the annual MS Walk in Louisville for many years. She helped to raise awareness and was a top fundraiser.

She is survived by her sisters Wanda Chambers, Joycelene Phipps, Janice Heady, Patricia Eddington, by her extended family and her religious community, the Sisters of Charity of Nazareth.

Funeral Arrangements are being handled by Ratterman Funeral Home, 3800 Bardstown Road, Louisville. Memorials may be made to the Office of Mission Advancement, P.O. Box 9, Nazareth, KY 40048; or to the National Multiple Sclerosis Society.