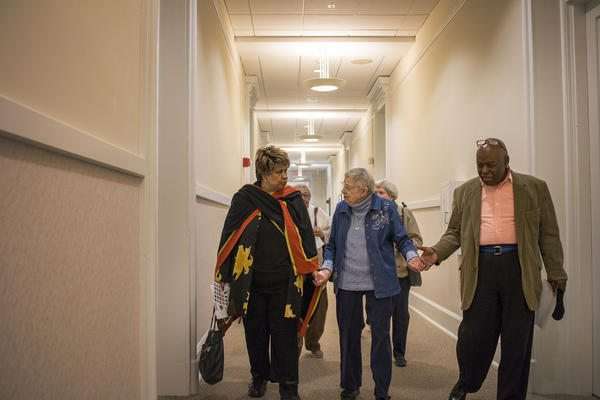 Sister Miriam Corcoran, center, leads guests down the hall to the Columba Room Saturday, where a special talk at Nazareth took place as part of an African American History Month Open House.
Reprinted from the Kentucky Standard

Sister Pat Haley started the program with lyrics from a song

“‘Pray together children. Don’t you get weary. There’s a great camp meeting in the promise land.’” Haley said. “The promise land was considered freedom.”

The spiritual was an example, she said, of how songs would be changed so that they could be marched to.

As Haley led the song, the Columba Room of Nazareth erupted in harmony as guests joined in singing and clapping along.

It was a meaningful start to the Sisters of Charity of Nazareth African American History Month program, which focused heavily on the slave families of Nazareth.

“We want to share with you the story of the beautiful people that lived here during the slavery years,” Theresa Knabel said, leading the program. “We did a lot of research to track down their names.”

Knabel gathered the information used for Saturday’s presentation from the Nazareth archives, including baptismal records, letters, council minutes, marriage documents and other resources.

“In the beginning, our records show that we had two, and they came with sisters that entered the community,” Knabel said. That was 1822. By 1865, Nazareth had 30 slaves, including children.

While some of the slaves that lived at Nazareth accompanied sisters who traveled there, Knabel said, there were also some bought at auction, and she projected up on the screen a bill of sale example reflecting the purchase of a woman named Louisa and her two young children, William and Henry.

Physical and human property were in Bishop Joseph Flaget’s name at the time.

“We have records that say they lived in log cabins,” Knabel said, adding that more cabins were built over the years. “We do know from our early annals that the cabins were located where our present church is now. There were six cabins lined up there and when the church was built, those had to be torn down and they were relocated somewhere else.”

Council minutes also documented the building of a social hall for servants.

“We know we had some musicians, especially the men,” Knabel said.

During the presentation, Knabel spoke about some of the families that served at Nazareth.

The Butler families included Louisa’s grown sons, their wives, and their children.

Henry married a woman named Emily Tunstall, who declared in 1868 having lived together as husband and wife for 20 years.

Being a Catholic location, Knabel said, priests performed marriages in the church for servants. And while the marriages were not initially considered legal, declarations of marriage were later issued to slaves.

In 1868, another couple, Harry Bean and Mary Buckman, declared having lived together for 30 years. Knabel said Harry actually worked at a neighboring farm, but the couple had 14 children together.

Four of the Bean children left Nazareth to serve in the war, as freedom was granted to black men recruited into the troops, Knabel said.

Knabel also spoke about the Beaven and Haseltine families, as well as descendants, such as the Douglases.

While many of the slaves remained at Nazareth, Knabel said, some were sold or traded.

In the event that a slave was traded or sold, they would often be sent to another Catholic family or organization so that they could maintain their faith.

In 1865, following the emancipation of three million slaves, a slave named Jane Beaven was recorded in the archives as having been upset about emancipation for fear of leaving what was considered their home.

“I’ve lived here all my life,” Jane is quoted. “This woman is old now.”

But Knabel said the younger ones living at Nazareth were excited about their freedom. While they moved away from the property, some continued to work at Nazareth.

After emancipation, the SCNs staffed several schools for African American children, beginning with St. Augustine in Louisville and St. Monica in Bardstown in 1871. SCNs also went on to staff a hospital in Alabama and African American camps in Virginia and Maryland.

A special exhibit highlighting African American collections accompanied the presentation, which was not the first time Nazareth has acknowledged its slave history.

In 2012, a monument was unveiled on the property as part of Nazareth’s bicentennial celebration. Names of 28 slaves who lived and died at Nazareth are engraved on the monument.

Knabel had also been a part of that project, which was launched after sisters discovered “unknown people” were buried in the cemetery.

Earlier, in 2000, the SCNs, the Sisters of Loretto and the Dominicans made a public apology for having owned slaves.

While the monument and apology certainly do not change the past, it’s a way for the sisters to properly honor those who are an often forgotten part of their history.

“It’s painful to admit all of that is part of our history, but we know that it is important to admit your wrongdoings,” Knabel said. “That’s the best road to healing.”

Additional information on the families can be found in the Archival Center at Nazareth.