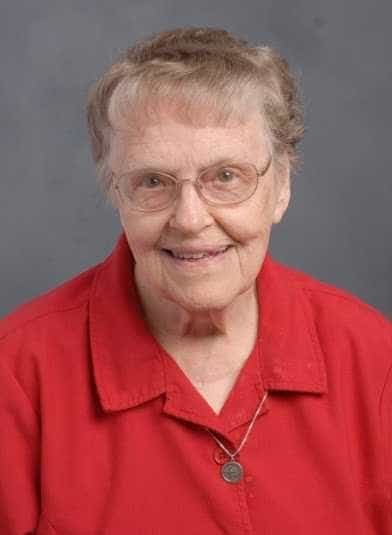 Anna Marie Rhodes, SCN, 90, (formerly Dorothy Jean) was born in Akron, OH. She died June 11, 2021, in Nazareth, Kentucky. She was a professed Sister of Charity of Nazareth for 70 years.

She studied history at the University of North Carolina, earning a Ph.D. She taught history at Spalding University from 1971-2000. In 1994, Sister Anna Marie was named Kentucky Professor of the Year by the Carnegie Foundation for the Advancement of Teaching.

Sister Anna Marie served her SCN Community at Nazareth Home in Louisville as a volunteer in Community Service starting in 2000. She continued to volunteer with the Congregation upon her move to the Nazareth Motherhouse in 2013. In recent years she would read to Sisters with vision problems and also assisted others with learning new technology, like Zoom.

She is survived by her identical twin sister, Mary Jane Rhodes, SCN, her sister Shirley Patterson, her brother Joseph Rhodes, her extended family, and her religious community. Burial arrangements are as follows: